Remembering the 4th of July... 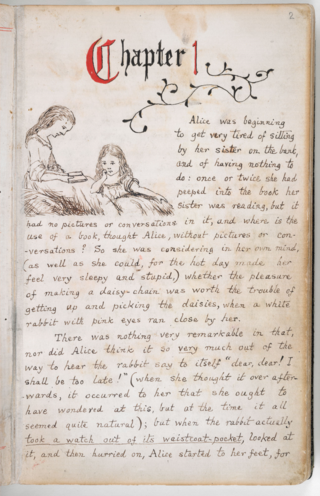 Tomorrow sees the anniversary of the now world famous boat trip on the River Thames in Oxford, when the Reverend Charles Lutwidge Dodgson, a mathematics don at Oxford University, rowed up the river with the three young daughters of the University’s Vice-Chancellor. The middle child was Alice Liddell, then aged ten.

Dodgson recorded the trip in his diary for 1862, one of nine volumes of his diaries that are held at the British Library. The details of the rowing trip itself are recorded on folio 15 of his diary: 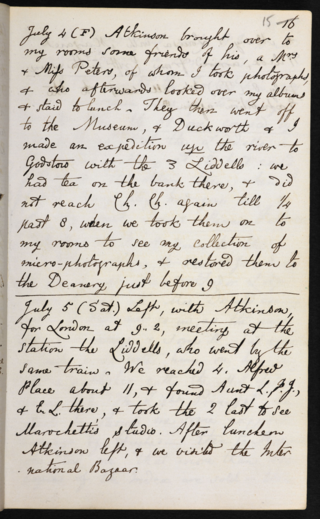 but the page opposite records why the trip turned out to be so important in the history of English literature. As he rowed up the river Dodgson began to tell the girls a story about a bored child called Alice who follows a white rabbit and ends up having a series of surreal adventures. The story, as recorded in Dodgson’s diary, was initially called ‘Alice’s Adventures Under Ground’. One year later, under his pen name of Lewis Carroll, the story was published in an expanded form with the new title Alice’s Adventures in Wonderland. 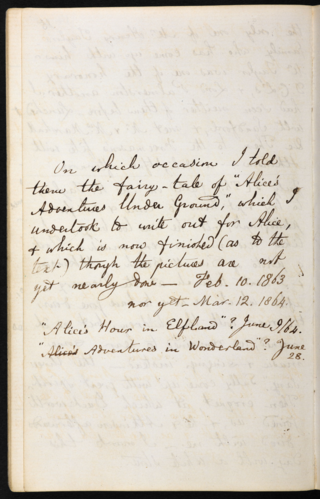 After the trip, Dodgson had written up the story, painstakingly added his own illustrations, and presented the manuscript to Alice Liddell as a gift, with the dedication: ‘A Christmas Gift to a Dear Child in Memory of a Summer’s Day’. This manuscript is now one of the British Library’s treasures; however, its journey from its original creation to its home in the Library is quite a marvellous tale in itself. Alice Liddell kept the manuscript until 1928 when she was forced to sell it to pay death duties after the death of her husband. The manuscript was sold at auction at Sotheby’s for £15,000 to an American dealer, Dr Rosenbach, who in turn sold it to Eldridge Johnson upon returning to America. Following Johnson’s death in 1946 the manuscript was again sold at auction. This time, however, it was purchased by a wealthy group of benefactors who donated the volume to the British people (and the British Museum) in 1948 in gratitude for their gallantry against Hitler during World War Two.

This year marks the 150th anniversary of the publication of Alice in Wonderland and gives us a chance to celebrate and to reflect upon the continuing influence of this much-loved story. The Alice manuscript has just taken a trip back across the Atlantic to be the centrepiece of an exhibition at the Pierpont Morgan Library in New York. Later in the year it will have a short sojourn at the Rosenbach Museum in Philadelphia before returning to us and going on display as part of our Front Hall exhibition which will explore the many ways that the story has been adapted, appropriated, reimaged and re-illustrated since its conception. The exhibition curators will be blogging later in the year as we work towards the launch on 20th November.

Though if you can’t wait until then to find out more, you can explore this manuscript and much more besides on the British Library’s Discovering Literature website, which you can find at http://www.bl.uk/collection-items/alices-adventures-under-ground-the-original-manuscript-version-of-alices-adventures-in-wonderland