Celebrating Translation at the British Library

On Friday 2nd October, the British Library will open its doors once more to the translation community to celebrate International Translation Day. Translators, authors, students, publishers, booksellers, librarians, bloggers and reviewers, all with an interest in translation, will gather to debate significant issues and developments within the sector, as well as to celebrate its successes. This annual event, presented by Free Word, English PEN and the British Library in association with the British Centre for Literary Translation, Literature Across Frontiers, the Translators' Association, Wales Literature Exchange and Words With-out Borders has become one of the highlights of the British Library’s calendar.

Translated literature may only represent between three and four per cent of books published each year in the UK, but most literature lovers will find that their bookshelves (real or virtual) hold a far greater proportion of translated works than such a statistic implies. The personal library of any serious book-worm is very likely to include international classics such as Homer, Tolstoy, Proust, Ibsen, Nietzsche and de Beauvoir, as well as examples of more contemporary authors such as Saramago, Kundera, Knausgård and Murakami…and perhaps some Scandinavian crime, for lighter, though somewhat dark, reading. Without this international literature our world would certainly be a great deal narrower, and our literature a great deal poorer. 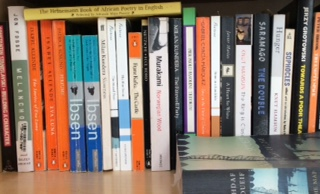 It is easy to forget when discussing the latest work by Murakami that the words on the page are in fact those of his translator/s and as such represent an act of interpretation. We have no way of knowing the challenges that the original text has presented the translator with, or how much is lost (or perhaps even gained) in translation. Even more hidden from our eye is the collaborative pro-cess that goes into the making of a translated text: the discussions that took place between the translator and the editor, or original author, over issues of style or ‘meaning’. Neither can we guess at the various levels of negotiation that bring a work of foreign literature to our shelves:  the impassioned letters from a translator to a publishing house persuading them to publish the latest literary gem they have discovered; the fierce negotiations over foreign rights at the international Book Fairs; the wrangling over author’s and translator’s fees; the concerns of publishing houses about the marketability of a work. In a sense, then, it is not just the translator and his/her process which remain largely invisible to the public, but all the other professionals who collaborate to bring translated fiction to our shelves.

It is this ‘hidden life’ of a translation – the whys and wherefores of translators’ choices and the complex process of translated literature reaching our shelves – which is often revealed in the archives of translators. Within its contemporary literary manuscripts collections, the British Library holds the extensive archives of poet Michael Hamburger (1924-2007) and playwright Michael Meyer (1921-2000). Both authors in their own right, Hamburger and Meyer are best known for their translations. Hamburger was responsible for bringing some of the most important German language writers, particularly poets, to our shelves, including Paul Celan, Gottfried Benn, Friederich Hölderlin and W. G. Sebald. Meyer translated the works of the great Scandinavian dramatists, Ibsen and Strindberg, for the British theatre, radio and television of the 1950s and 1960s, bring-ing a freshness to the texts which helped to ensure their status in the twentieth century’s dramatic repertoire. These two archives, containing draft manuscripts of their translations alongside correspondence with editors, literary agents, publishers and other prominent literary figures shed light on the ‘hidden life’ of a translation.

Other equally interesting translation-related material is to be found in the recently acquired archives of contemporary poets Ted Hughes and Peter Dale, both prolific translators. Hughes believed passionately in the importance of translation, and the archive includes letters and papers relating to the journal Modern Poetry in Translation which he and the publisher Daniel Weissbort founded in 1965 with the express aim of bringing contemporary foreign poetry to the Anglophone reader. Hughes’s own translation work included the poetry of Ovid, and plays by Euripides, Racine and Wedekind. The archive includes correspondence about his translations of Garcia Lorca’s Blood Wedding as well as drafts of his translation of Aeschylus’s Oresteia. Peter Dale’s translations from the French include the poetry of François Villon and Paul Valéry and Dante’s Divine Comedy.

The Library’s archives collections do not only represent translations into English. A collection of correspondence between Harold Pinter and his Japanese translator Tetsuo Kishi not only throws light on the relationship between author and translator but also on the cultural transformation that Pinter’s plays undergo in translation, giving us pause for thought about the Pinter we know and love, and what it is it about his work that transferred so effectively to Japanese theatre.

Older translation-related treasures are to be found in the British Library vaults too. The archive of the nineteenth century drama critic, translator and author William Archer, who brought many of Ibsen’s plays to the British theatre for the first time in the late 1800s, includes papers related to performances of the time, and discussions with George Bernard Shaw about Ibsen’s work. The literary manuscripts of William Morris contain drafts of his translations of the Icelandic Edda and Beowolf, along with correspondence and notes. The archive of William Henry Fox Talbot, known chiefly as a pioneer in photography, but also an Assyriologist and one of the first decipherers of the inscriptions of Nineveh, includes a collection of notebooks with his draft translations.

And from even further back in time there are many Early Modern British and European manuscripts of translated works; not just into English but from English into Latin, Greek, Italian, Dutch, Swedish and Arabic (to name but a few). Some even earlier examples of translation are to found in our Arabic and Islamic Heritage collections - among them a thirteenth century manuscript of Ptolemaeus’ Almagest, an influential astronomical text thought to have been translated from the Greek into Arabic by al-Hajjaj ibn Yusuf ibn Matar in about 900 AD. The manuscript was owned by the mathematician Tusi, and is annotated with his comments and improvements on Ptolemaeus’ system, as well as remarks where he finds fault with the translation (visit the Qatar Digital Library at http://www.qdl.qa/en  to find out more). Such documents offer important historical clues into the impact of translation in the history of the international ex-change of ideas on philosophy, medicine, surgery, theology, as well as politics, trade and diplomacy, from as early as the thirteenth century.

The fact that translation and international literature is an intrinsic part of our national heritage, both past and present, is not only represented throughout the British Library’s collection, but is celebrated in our calendar of events through-out the year. This June, for example, UCL held the ARTIS 2015 Conference: Multidimensional Methodologies: collaboration and networking in translation re-search. The conference included a panel discussion about the relationship be-tween Archives, Museums and the study of Literary Translation, followed by a “show and tell” session led by curators at the Library to showcase some of our collections.

For the general public with an interest in international and translated literature, there are a variety of events to be found on the British Library’s calendar, not only including the forthcoming International Translation Day, but The PEN Pinter Prize held this year on October 6th, European Literature Night held each spring, and a plethora of events throughout the year which offer audiences an opportunity to hear international and British authors from a variety of ethnic backgrounds, as well as translators, discuss their work.

Deborah Dawkin is currently working on a collaborative AHRC PhD project with UCL and the British Library focussing on the archive of Ibsen translator Michael Meyer.