By Deborah Dawkin, who is a translator and currently working on a collaborative AHRC PhD project with UCL and the British Library focussing on the archive of Ibsen translator Michael Meyer.

On the 4th October the British Library hosted International Translation Day 2015. Marking St Jerome’s day, the Patron Saint of Translators, ITD is a day when translators, authors, publishers, booksellers, critics come together to share ideas, take stock of some of the challenges in the industry, and importantly celebrate its successes. In her opening speech Rose Fenton, Director of Free Word, aptly described this symposium, now in its sixth year, as the “gathering of the translation clan”. 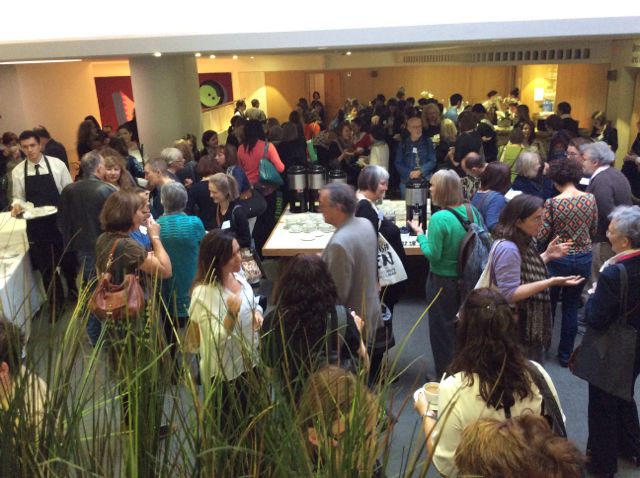 The “translation clan” gather over morning coffee in the British Library conference centre.

If translators do indeed belong to some sort of “clan”, then we, the general public, are nonetheless touched by their work in countless invisible ways: not only in the form of literary translation, but in the international news reports splashed across our television screens and front pages, the ingredients lists or instructions on foreign products, and the subtitles for the latest TV Scandinavian crime series. Translation and translators, it seems, quietly intersect with our reality every day. It was this intersection, and with it the exciting potential of engagement between translators and the public ­– through more interactive publishing, readers’ groups, blogs and literary festivals, as well as outreach work in schools and communities - which emerged as a recurring theme of this year’s International Translation Day.

The empowerment of readers in a fast-changing media landscape was the subject of the opening panel. Entitled “The Rise of the Reader” the discussion was chaired by Alex Clark and panellists included Gaby Wood, literary director of the Booker Prize Foundation, Anna Jean Hughes, Founder and Editorial Director of The Pigeonhole; and Will Rycroft Community Manager at Vintage. We no longer inhabit a world in which publishers are alone in choosing which books to publish, and in which newspaper critics have the last say on quality. As Rycroft pointed out the fact that people are using a single app on which to play, talk and read – even reading on their phones – opens up possibilities for engaging new readers. Hughes described how The Pigeonhole publishes books in serial form online, including authors and readers in conversation, and hopes translators too might join that conversation. Hughes’s ultimate aim is to “enhance books through conversation across the globe” and suggested that we might experiment with the crowd sourcing of literary translations to speed up the process of bringing translated literature to the public.

One of the seminars I found of particular interest explored the growing interest in Translators in Residence. Translators in Residence schemes are comparatively new, but proving an extremely worthwhile initiative in engaging the public in translation. We heard from several translators who were involved in workshops in schools. Sam Holmes explained how sometimes the most productive work a translator in residence can do, is that which runs counter to what students might usually encounter in the classroom. Instead of focussing on the rigid expectations of an exam syllabus, children are encouraged to see their own potential as translators and to work creatively with language. Projects run by Lucy Greaves, during her residence at the Free Word Centre included a Translation and Creative Writing workshop in a refugee centre. Her workshops culminated in the event 'Signs', a showcase of the work of pupils from Frank Barnes School for Deaf Children as part of Islington Word Festival. Translator in Residence schemes are not only a wonderful way in which to generate interest in translated literature and foreign language learning but can be empowering for the communities which they reach out to.

There were countless other subjects that inspired animated discussion during the day. The eight seminars on offer covered a wide range of issues. Subjects included the running of translation workshops in libraries, bookshops and schools offering the public an insight into the art of translation; how book sellers and publishers might involve translators in the promotion of books at literary festivals and events; self-publishing by foreign authors and translators in collaboration; the new opportunities and challenges for the translation industry created by developments in the digitised games, video and AV; and the strategies used by translators to give cultural and historical background where needed, without overloading the text.

An interesting and amusing experiment opened a seminar entitled “Translation-Speak: Literary difference or bad English?” The audience and panellists were given anonymous passages from various published novels and asked to guess which had been written in English originally and which were translations. It proved an almost impossible exercise, with most passages splitting the vote. What was revealed was that there were often stylistic oddities in those texts originally written in English, that might have been regarded as awkward and therefore faults in a translation, and that the translated texts often read very (perhaps too) smoothly. This led to a discussion about whether translators and their editors are daring enough in their use of language, or often confined to producing texts that are an attractive and “easy read”, even where the original might be more stylistically demanding. The final panel of the day “From Page to Stage” included readings by actors from Sasha Dugdale’s translations of Belarusian playwright Pavel Pryazhko’s work.  In the discussion Dugdale and Chris Campbell, Literary Manager at the Royal Court, explored the journey made by a play as it passes through the hands of the translator, writer, dramaturg, director and finally the actors themselves.

The day was rounded off with the Found in Translation Award Ceremony, which was awarded this year to Ursula Philips for her translation of the novel Choucas by the Polish author Zofia Nalkowska.

Posted by Joanna Norledge at 11:49 AM