Alice in Wonderland exhibition opens today at the British Library!

A free exhibition exploring the legacy of Alice’s Adventures in Wonderland opens today at the British Library. Recognising the enduring power of Lewis Carroll’s original story and the illustrations of John Tenniel, the exhibition explores how the story of the girl who went ‘down the rabbit hole’ continues to inspire and entertain 150 years after it was first published.

The exhibition begins with a series of illustrated panels showing scenes from the story taken from different editions of Alice with accompanying text and Carroll quotes. Although Carroll’s book remains popular we thought that it would be useful to remind visitors of the story which, because it is so much part of British culture, we often feel that we know even if we haven’t read it for years!

Once they have familiarised themselves with the story visitors can move onto the first section of the exhibition which explores the beginnings of Wonderland and includes one of the British Library’s most loved treasures, Lewis Carroll’s iconic handwritten manuscript of Alice’s Adventures Under Ground, and an entry from Carroll’s diary detailing the ‘golden afternoon’ on 4 July 1862 when he first told the story to Alice Liddell and her sisters. This section also includes photographs by Carroll and items relating to the manuscript’s sale in 1928 and its subsequent return to Britain in 1948. A drawing of Alice from Alice's Adventures Under Ground

The second section of the exhibition focuses on the publication of the book, the role of the illustrator John Tenniel and Carroll’s involvement with the early ‘Alice’ industry which developed after the critical and public success of Alice. Items on display include two of Carroll’s diaries in which he writes about the publication and success of his work, some of the original woodblocks created by the Dalziel Brothers and The Nursery Alice (1890), which contains coloured illustrations by Tenniel showing Alice in a yellow rather than a blue dress. 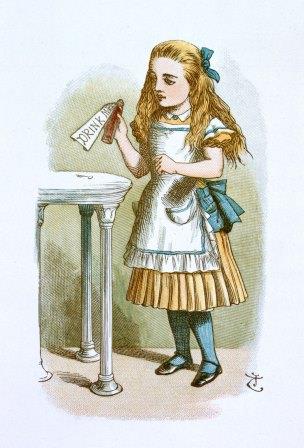 Alice in a yellow dress from The Nursery Alice (1890)

The final section, Alice Re-imagined, highlights the way in which the story has inspired generations of illustrators, artists, musicians, filmmakers and designers. New illustrated editions of the book began to emerge in 1907 when the copyright expired. A flurry of new editions were published in the decades that followed including beautiful editions by Arthur Rackham, Charles Robinson, Mabel Lucie Attwell and Mervyn Peake. As artistic styles changed so did the way in which Alice was depicted as she began to lose her Victorian clothing in favour of Edwardian and later interwar fashions such as bobbed hair and shorted skirts. The book also proved to be a rich source for parodies and useful for marketing as we can see with the promotional pamphlets created by the Guinness Brewery. 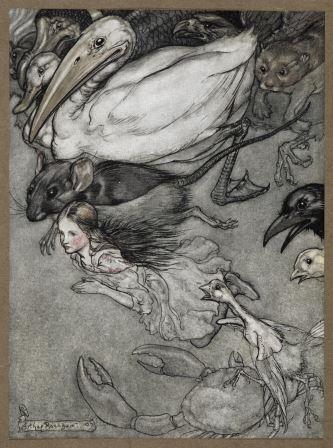 During the second half of the century different artistic and cultural movements tapped into Carroll’s story picking out those elements which most chimed with their own theories and beliefs. This led to strikingly different visions of Alice from the Disney animation of 1951 to the counter-culture and psychedelia of the 1960s reflected in Jefferson Airplane’s 'White Rabbit' and Ralph Steadman’s Wonderland, and Dali’s surrealist interpretation which concentrated on representations of dreams and realities.

In addition to archive and printed items the exhibition also includes Alice objects from figurines to tea cups as well as sound recordings of music about and inspired by Alice and clips of the 1903 silent film, ‘Alice’s Adventures in Wonderland’ by Cecil Hepworth and Percy Stow and Jan Švankmajer’s 1988 film 'Něco z Alenky'.

The exhibition is on until 17th April 2016 so please do come along if you can. The exhibition is accompanied by an Alice in Wonderland Pop-up Shop (until 31 January 2016) and a series of Alice-inspired events, including a family workshop, evening of live comedy, music and experiments hosted by Festival of the Spoken Nerd and two sold out Lates at the Library.