The Joan Littlewood Archive takes up three inconspicuous bays of storage, just shy of one hundred boxes in rather uniform box-files. We’re not supposed to talk about dusty archives these days but more than one member of the department introduced me to the collection mentioning it as ‘the dustiest collection I have ever seen’. This, it turns out, is incredibly accurate but the contents of the collection promises to be as vibrant and interesting as Joan was herself. Joan Littlewood and her company were an incredibly important part of post-war theatre and opening up her collections will be invaluable to many people.

Joan began her theatre career at RADA - which she attended on a scholarship - but despite very promising beginnings she quickly dropped out, stifled by the stuffiness. Seeking what she imagined to be a ‘truer’ theatre experience Joan walked from London to Manchester, sleeping in hedgerows and eating foraged turnips. The photos below show the reaction to the ‘Girl Tramp’ and her explosive entrance to Manchester. 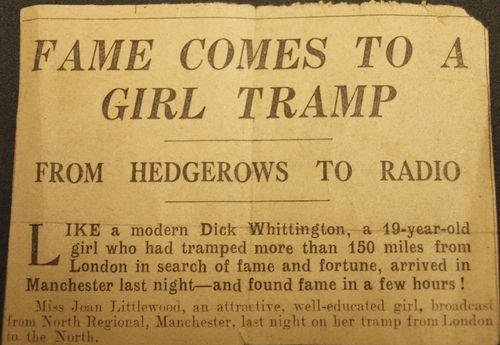 Following her arrival she joined the Manchester Reperatory but again, despite high praise, she quit after just two seasons. From Manchester she wrote for the BBC (before being temporarily banned for her communist allegiances) and then began Theatre Union with her then husband Ewan MacColl. Theatre Union later developed into the Theatre Workshop for which Joan is most renowned and which eventually settled in the Theatre Royal, Stratford, where during the early years much of the company essentially squatted. Theatre Workshop’s most famous out-put included: ‘Oh What a Lovely War!’, ‘A Taste of Honey’ and ‘Fings aint wot they used t’be’ as well as producing the first British production of Brecht’s ‘Mother Courage and her Children’. However, the scope of Theatre Workshop is far wider than these pieces and it is incredibly exciting to gain a greater understanding of the company as the collection unfolds. 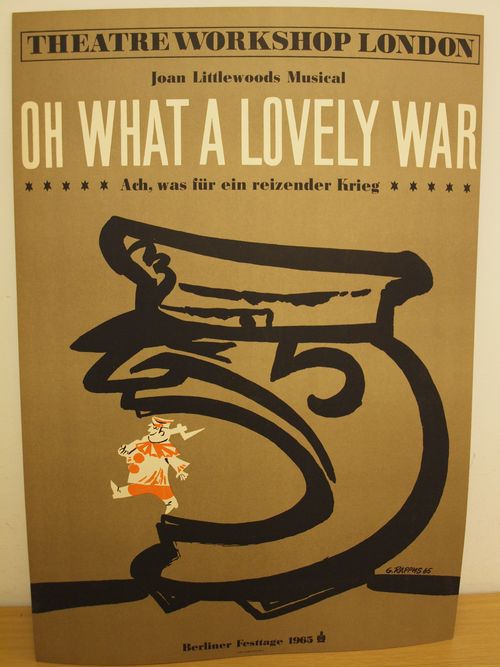 Poster for a Berlin Festival performance of 'Oh! What A Lovely War' by Theatre Workshop London

The collection contains what you might expect of a personal archive of this sort: lots of correspondence, personal and professional, accounts of the theatres and productions, diaries, photographs, posters and scripts. What is initially striking is the organisation and annotation from Joan herself, she is incredibly present in her collection. Half I think as she organised her papers in order to write her autobiography but also with the knowledge that her papers would likely be of interest after her death. Her interference is both helpful and unhelpful to the cataloguing process. She adds detail and colour to events, clarifies names and organised a lot of her correspondence chronologically. But, she is also annotating things with a reflective eye, sometimes even copying out early diaries and editing them. Luckily, she has very distinctive hand-writing and tends to use capitals for her later additions and sometimes her control slips and little glimpses of an unguarded Joan peek through. 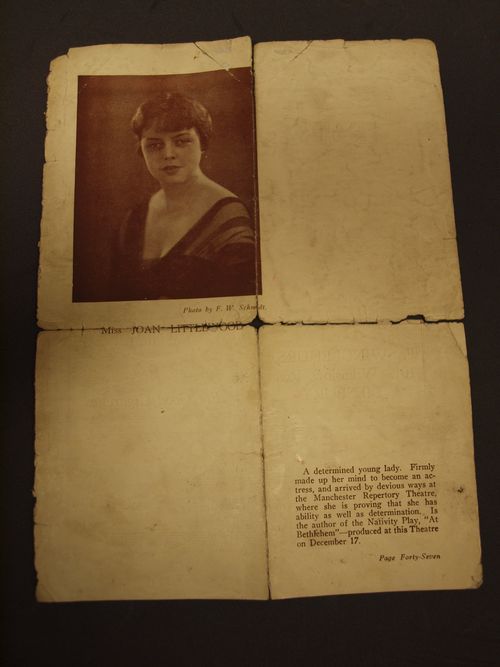 An early headshot and bio for Joan Littlewood

I am a little under half-way through creating a box list of the collection and have already been deeply moved, shocked or found myself laughing out loud. The collection moves from official company business to passionate and emotional letters between her and her long-term partner Gerry Raffles to biting notes on members of the company and then to evidence of her self-imposed exile to France after Gerry’s death – the letters reaching her during this period seem to have gone unanswered, people crave her response or a visit to England and are peppered with her own hand scrawled notes and stray sentences revealing her emotions at the time. 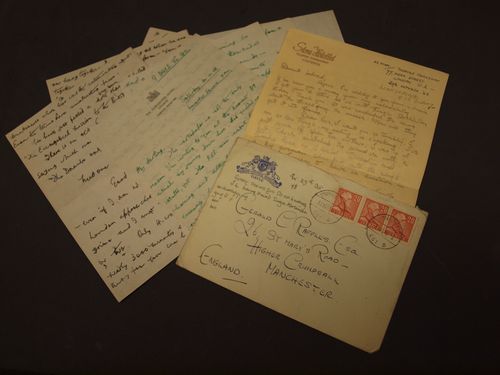 Some correspondence between Joan Littlewood and Gerry Raffles

What is clear about this collection, even at such an early stage, is how valuable it will be to a variety of researchers and how important it is to put this evidence of Joan out there within the narrative of theatre history. There is a little section of this archive for everybody: formal theatre accounts and evidence of an endless battle for funding, an account of the struggle to make approachable working class theatre, Joan’s unwavering dedication to current social issues and the more personal aspects of Joan’s private life often supplemented with the strength and wit of her own later thoughts and observations.

Posted by Joanna Norledge at 4:28 PM

This brought back many memories of Joan at Theatre Workshop Stratford, E15 when the company were were at their most vibrant I shall always remember seeinog Joan in her production of Lysistrata and again in Mother Courage, also the hilarious Good Soldier Schweik and The Threepenny Opera. Sunday evenings were reserved for marvellous concerts - Ballads and Blues - featuring Ewan McColl, Bert Lloyd, Seamus Ennis, sometimes Alan Lomax and many others. I used to treck by tube from north west London to the Theatre Royal Stratford, with its air of faded plush but once the curtain opened it was just magic!