How deep is the ocean, how high is the sky?

Having enjoyed compiling literary anthologies about gardens (Pleasures of the Garden) and food (Pleasures of the Table), I turned to a much more challenging subject: Pleasures of Nature. Where to start and where to stop? I decided that a challenging way of classifying literary mentions of natural things would be to consider them in the context of the four elements: Earth, Air, Fire and Water. Earth’s ‘sweet interchange of hill and valley, rivers, woods and plains’ are mournfully recalled by the exiled Satan in Paradise Lost, a tranquil scene quite unlike the ‘mighty polypus mouth … chewing and digesting its food in its throat and belly’ of the earthquake described by Sabine Baring-Gould in his tempestuous romantic novel Winefred. Trees are firmly rooted in earth, particularly such ancient giants as the Borrowdale yews apostrophized by Wordsworth, and the hunched beech and juniper of the ancient combe found in the Marlborough Downs by Edward Thomas. And then there are particularly earthbound creatures: D H Lawrence’s ‘little Titan’ of a tortoise and Richard Braithwaite’s hedgehog, ‘a whole fort in himself’. 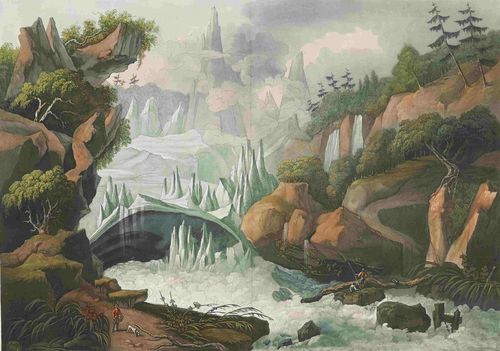 ‘View of the Source of the Arveyron, by Belanger and Vanlerberghe, engraved by Malgo’, 1829. British Library Maps K.Top.76.84.b.

Writers conjure air up in rainbows, winds and mists, the ‘tremendous voice’ of James Thomson’s thunder, and the ‘livid flame’ of his lightning. Leonardo da Vinci analysed the varying blues of atmosphere: smoky grey, azure, profoundly dark. Coleridge made startlingly vivid notes on sunsets and moonsets, observed while upturning his chamber pot out of the window of his Keswick residence, Greta Hall. It’s also the domain of Tennyson’s eagle, falling like a thunderbolt, Dorothy Wordsworth’s tremulously fluttering swallows, and Emerson’s ‘burly, dozing humble-bee.’ 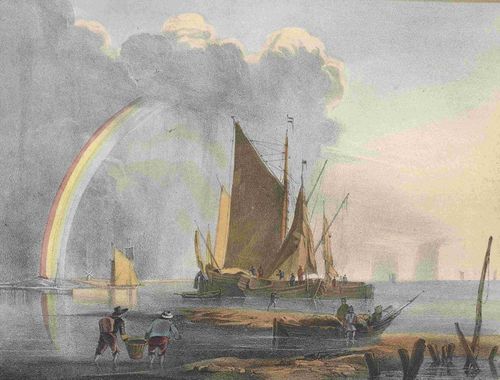 Fiery phenomena invade all the elements of course, be they volcanoes (observed at Pompeii by Pliny, and at Krakatoa by R M Ballantyne), ‘phosphorescent billows’ as whales’ tails lash the sea in Moby-Dick, or Robert Service’s ‘wild and weird and wan’ Northern Lights dancing in the polar sky. Thomas Hardy likened the great bonfire lit on the heath in The Return of the Native to ancient funeral pyres and Bartholomew Anglicus’s phoenix crawled into a nest ‘of right sweet-smelling sticks’, which is set on fire by the sun. 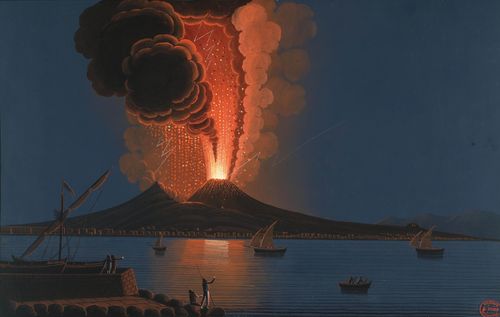 Plate from Campi Phlegraei: Observations on the Volcanoes of the Two Sicilies by William Hamilton, Ambassador to the Court of Naples, 1776. British Library TAB.435.a.15, volume 1.

But time and again I came across passages that escaped my quartet of categories. So I added two more. One was Surprise, in honour of Terry Pratchett, who once jokingly defined it as a fifth element, which I could fill with fun in the form of Lewis Carroll’s Bread-and-Butter-Fly, Jean Fabré’s macabre account of the courting habits of the grasshopper, and Aldous Huxley’s jokey skit on Darwinism, ‘Jonah and the Apes’. Finally, I found a home for the most arresting passages and poems under Deep Thinking. God recurs: as a ‘vast Chain of Being’ for Alexander Pope, in the changing seasons for Henry Vaughan, in the form of Space for Coleridge, jokingly in Rupert Brooke’s piscine ‘Heaven’. The Japanese poet Bashö reads Buddhist poems under the moon, Robert Louis Stevenson wanders the bird-enchanted highlands in ‘a trance of silence’. The pioneer environmentalist Aldo Leopold reminds us that ‘in wildness is the salvation of the world’, and the physicist Chet Raymo gazes at the stars from a dark hillside, listening and watching ‘for the tingle in the spine’.

I found much to comfort, but also much to dread during my reading. We are taming and tidying our world too thoroughly. In our gardens, birds, bees and hedgehogs disappear in the face of pesticides. The rockpools on our beaches are all but deserted. In South America, Africa and Asia, forests shrink unimaginably quickly, and round the globe the oceans are being ruthlessly harvested and polluted. As we reach greedily for the stars, let’s stop a while and remember Gilbert White’s tortoise, digging himself into the ground with a movement that ‘little exceeded the hour hand of a clock’, and the tall old shepherd in the Lakeland Hills who, Harriet Martineau tells us, ‘has trod upon rainbows’.

Posted by Joanna Norledge at 3:03 PM