J. G. Ballard: Streets in the Sky and the Secret Logic of the High-Rise 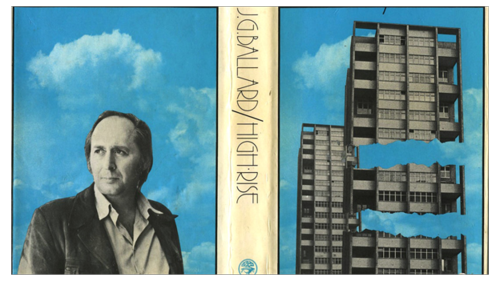 Hardly a day goes by without a news report about London’s social housing crisis. There are currently more than 260 high-rise buildings (of 20 floors or more) either under construction or in the pipeline that are set to dramatically change the London skyline. Yet the high prices of the apartments they will offer, and their attractiveness to foreign (and absentee) investors, means that they will have little impact on London’s urgent need for affordable housing. In stark contrast, residential high-rise buildings constructed in London in the late 1960s and 1970s – such as Balfron Tower (1967), and Trellick Tower (1972) and the three residential towers at the Barbican (1973-76) – were social housing projects. 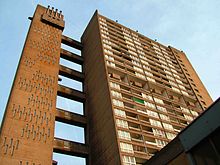 When Balfron Tower, in Poplar, Tower Hamlets, was completed in 1967, the building’s architect, Erno Goldfinger, took up temporary residence for two months in a flat on the 25th floor to experience at first-hand what it was like to live there. He talked to all the residents in turn at a series of ‘get-to-know-you’ parties that he and his wife hosted in their flat. An inadequate number of lifts was one particular problem: Balfron Tower had only two lifts, so a third lift was added to the plans for his next project, Trellick Tower (1972). Greatly influenced by Le Corbusier, Goldfinger envisaged the floors of his buildings as a series of streets in the sky. Almost all the original residents of Balfron Tower had been re-housed from Tower Hamlets, and it was Goldfinger’s belief that their deeply-rooted sense of local community would transfer smoothly to their new elevated neighbourhood. 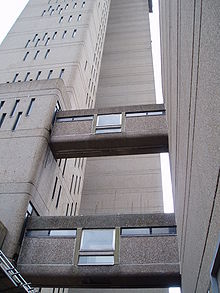 But Goldfinger’s high-rise buildings did not develop along the socially cohesive lines he had envisaged. Isolation, crime and vandalism took hold, and life in the stark and fortress-like concrete towers moved ever closer to the dystopian architectural vision of J. G. Ballard’s contemporaneous novel High-Rise (1975): ‘With its forty floors and thousand apartments, its supermarket and swimming-pools, bank and junior school – all in effect abandoned in the sky – the high-rise offered more than enough opportunities for violence and confrontation.’ Rather like Erno Goldfinger, the architect in Ballard’s novel, Anthony Royal, is a resident who throws parties. It is his Alsatian dog that Laing is roasting on his balcony as the novel begins. And the secret logic that Wilder discovers as he fights his way up the high-rise towards Royal’s penthouse at the top is that ‘free and degenerate behaviour became easier the higher he moved up the building’.

By the time that Goldfinger’s buildings were completed, American studies of life in high-rise buildings had already come to the firm view that their design made them inherently prone to crime, and they were entirely unsuitable for families with young children. Unattended lifts (prime sites of conflict in Ballard’s novel) were hazardous play areas, and the taller the building the greater the propensity for crime. One influential study that Ballard had read, Oscar Newman’s Defensible Space (1972), argued that in a high-rise block the only ‘defensible space’ is the apartment itself. Without concierge-controlled entry (which the GLC had not implemented in Goldfinger’s buildings), the entrance lobby, stairs, lifts and corridors were open to all-comers: ‘these interior areas are sparsely used and impossible to survey; they become a nether world of fear and crime’. With a typical Ballardian twist, however, the inherent weaknesses of his high rise building lead not to attack from strangers without but to a breakdown from within as the building’s occupants quickly turn upon each other. The residents of Ballard’s building belong to an entirely professional class, in fact a self-selected grouping that should, according to American studies, be most suited to living there. Yet Ballard typically portrays them as affectless and detached, and most susceptible to the malign influences of the building. In this topsy-turvy world, the ascent of Wilder (the wild man) is a form of descent to an infantile primitivism. He’s a primitive with a cine-camera. High rise buildings, wrote Newman, ‘encourage crime by fostering feelings of anonymity, isolation, irresponsibility, [and] lack of identity with surroundings’, the very qualities that spur Ballard’s occupants towards their new (and apparently welcome) life of dereliction.

Goldfinger died in 1987, his reputation in ruins. Today, however, Balfron and Trellick Towers are desirable addresses, both Grade II-listed Brutalist treasures. The residents of Trellick Tower turned their situation around in the 1980s, and the housing association Poplar HARCA is currently carrying out a full refurbishment of Balfron Tower. Everyone was decanted from Balfron while the work was carried out, and residents were to have the option of keeping their flats in the blocks, or of moving into new low-rise homes nearby, in which case the vacated flats would be sold to finance the works. However, in 2015, HARCA concluded that it could no longer afford social housing in Balfron Tower, and the building is about to transfer unchecked to the lucrative private sector, cleansed of any dream of social housing.

On Friday 11 March, there will be a special preview showing at the British Library of Ben Wheatley’s new film of Ballard’s High-Rise, starring Tom Hiddleston.

On Sunday 13 March, the British Library is hosting a one-day Ballard conference: ‘Inner Space: J G Ballard in the Seventies’.

To accompany both events, in the British Library’s Treasures Gallery there will be a display of Ballard’s draft manuscript for High-Rise and Ben Wheatley’s annotated film script.

Posted by Joanna Norledge at 10:24 AM