As part of the Library’s brief to collect a copy of every book published in the UK, the Contemporary British Publications team takes a keen interest in publications outside the mainstream, including the publications of fine presses and artist’s books. Recently, we were pleased to welcome the internationally acclaimed Welsh book artist Shirley Jones of Red Hen Press who visited us to deliver a copy of her latest work, The Quest. Located in Powys, Wales, Red Hen Press has been in operation since 1983, creating limited edition letterpress books that present poetry and prose in concert with etchings and mezzotints. 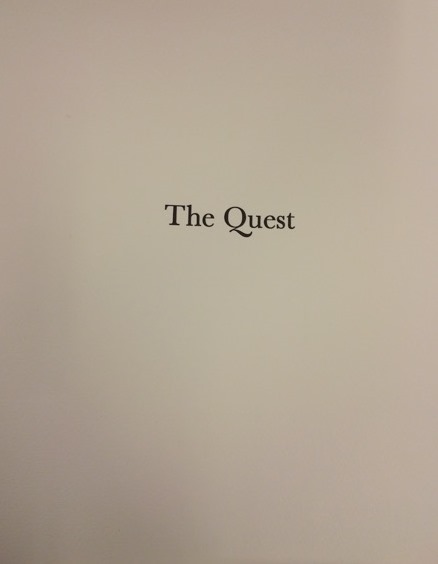 The Quest represents an artist’s book of the very highest order. The book contains five of the most sumptuous coloured mezzotint plates augmented with gold. Jones’ skill and experience as a book artist is plain to see from her reimagining of this folk tale, drawn from the middle Welsh epic Culhwch and Olwen. The Quest explores a stimulating and imaginative narrative of Gwrhyr’s search for Mabon, the son of Modron, which picks at the threads of folk tales which extend back to some of the very earliest oral and folk traditions.

In the tale, Gwrhyr, a warrior emissary of King Arthur, petitions various animals in his search for the whereabouts of Mabon, the son of Modron. Each animal refers Gwrhyr to another, older creature. They illustrate their ages by making reference to how the landscape and physical environment have changed over a great length of time. The Blackbird of Cilgwri, pecked away every evening at a smith’s anvil, and in this way she has eroded it to the size of a nut. 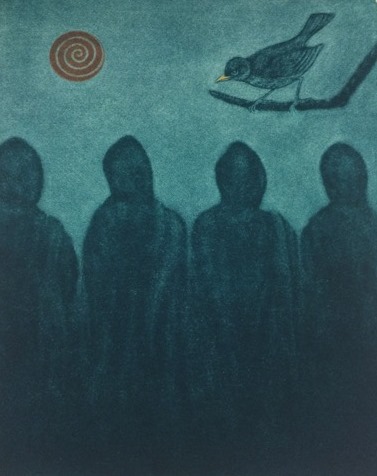 The Blackbird of Cilgwri refers Gwrhyr to the Stag of Rhedynfre, who in turn demonstrates his age by outliving an oak tree, which now is only a withered stump.  The Stag of Rhedynfre has no knowledge of Mabon the son of Modron. He goes on to suggest that Gwrhyr visits the Owl of Cawlwyd. In turn the Owl of Cawlwayd, unable to help, suggests he visits the animal that has travelled most, the Eagle of Gwernabwy. The Eagle of Gwernabwy, to illustrate his great age, makes reference to pecking the stars in the sky.  He had heard of Mabon when he was searching for food, and attempted to catch the Salmon of Llyn Llyw. The Eagle of Gwernabwy brought Gwrhyr to the Salmon of Llyn Llyw.  Finally the Salmon of Lyn Llyw tells what he knows of the fate of Mabon, the son of Modron. It transpires that he is imprisoned in a watery Gloucester dungeon.

The five full page mezzotint plates depict each of these animals in stunning and uncompromising detail. They are interleaved between six folded sheets containing the text.

The story may act as a metaphor for the changing environment and the impact of man on the delicate balance of the natural world. The Owl of Cawlwyd makes reference to men coming and uprooting a wooded glen and its being replaced two times over. However what is most interesting about this depiction is the different ages of the animals mentioned; as the narrative unravels, the animals become progressively older. This is an interesting feature of the tale and contrasts the idea of all animals being the same created on the same day within Christian tradition.

The connection of the salmon and wisdom or knowledge is well established in mythology, and in the quest for Mabon, the son of Modron, it is noteworthy that the salmon is the oldest of the creatures that we come across in the tale. This is similar to the folk tale of the Fionn mac Cumhaill and the Salmon of knowledge, where, while preparing the fish for his teacher, Finnegas, Fionn burnt his finger and inadvertently tastes the fish from his finger and in doing so acquired the gift of all knowledge.

Another more contemporary reference brought to mind by the plates Jones has produced for this tome is the images on Irish coinage prior to the introduction of the Euro.  Although the punt and sterling remained linked until 1979, Ireland retained legal tender of its own design.  In 1926, the poet William Butler Yeats chaired a committee to plan new Irish coinage. The committee agreed that the national symbol of the harp should continue to adorn the face (common obverse).  A set of designs by Percy Medcalf were agreed by the committee for the reverse. Amongst those designs was the salmon, which adorned the florin and then after decimalisation, the ten pence piece.  In 1990 the pound coin was introduced, designed with a red deer by the Irish artist Tomas Ryan very much in the style of Percy Metcalf's 1928 design. On seeing the images of the stag and the salmon, from the plates in The Quest, I was immediately reminded of the Medcalf design that rattled around in my pocket during my teens and early twenties while studying in Dublin. 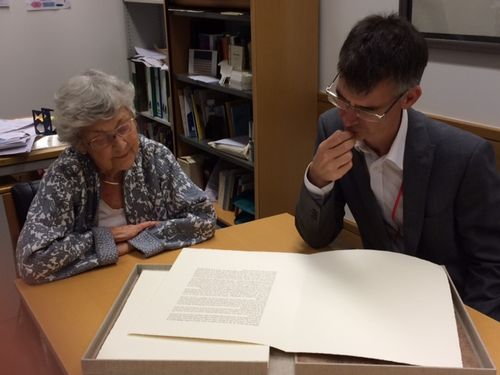 The British Library’s copy of The Quest can be ordered up for consultation in our reading rooms. It is stored at British Library shelfmark: RF.2015.b.75. The Quest is also being exhibited at the Craft in the Bay, Members Showcase, Cardiff until 24 April 2016.

Posted by Joanna Norledge at 9:29 AM