From poets to punk: Who is Barry Miles?

Key counterculture figure, bookshop manager, editor, publisher, author, music journalist, archivist, biographer: all of this, and more, is Barry Miles, or just ‘Miles’, as he is better known.

His archive, acquired by the British Library in 2013 and recently catalogued, is a rich and unique source of information not only to anyone interested in Miles himself, but also to those researching the Beat Generation, and the ‘60s and ‘70s culture and music.

Miles organised and arranged his papers thoroughly. Divided into correspondence, projects files, folders relating to his publications, and reference material, the archive reflects all stages of Miles’s life and career, from his time as a student at Gloucestershire College of Art in the early ‘60s to the present day.

At the centre of the London underground scene, as manager of Better Books, co-founder of Indica Gallery and Bookshop and International Times (IT), and organiser of many events, Miles developed an extensive network of contacts, within and outside the UK, many of whom were also good friends. Jim Haynes, Peter Asher, Pete Brown, Victor Bockris, Caroline Coon, Piero Heliczer, Richard Neville, Gordon Ball, Simon Vinkenoog, Lawrence Ferlinghetti, Urban Gwerder, to name but a few of his correspondents. 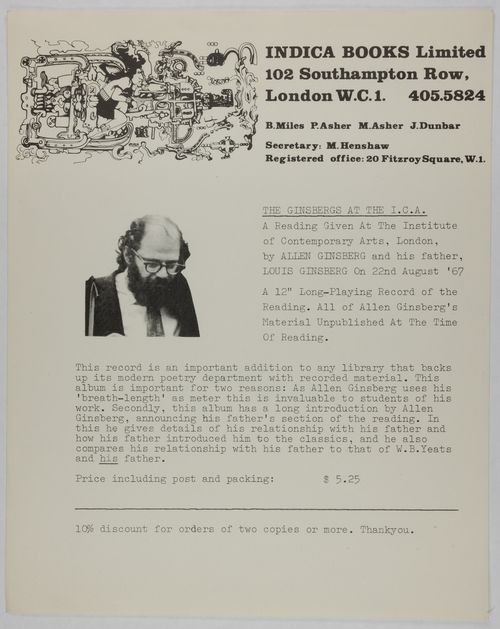 Flyer on Indica Books limited headed paper advertising The Ginsbergs at the ICA, a recording of the reading given by Allen and his father on 22 August 1967. Reproduced with kind permission from Barry Miles.

With the same people, Miles collaborated on numerous adventures: there are over 100 files in the collection relating to projects in which he was involved, for example his work as editor of Horde and Long Hair, as London correspondent of East Village Other, as co-founder of Lovebooks, Miles, Asher and Dunbar Ltd., and ECAL, as Time Out editor, as manager of Zapple, and as music journalist for New Musical Express. The files include letters, publicity material, press cuttings, newsletters, photographs, reports, notes, press releases, events programmes, draft articles and unpublished material. 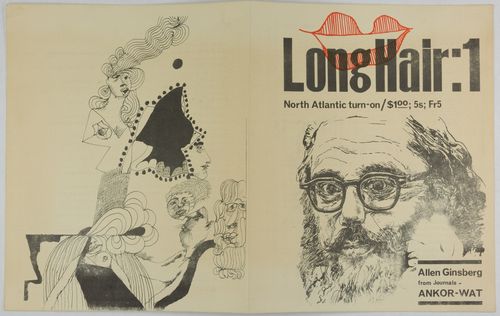 Trial proof of the cover of Long Hair magazine, Lovebooks second poetry publication, 1965. Miles edited the issue and contributed to the cover drawing. Reproduced with kind permission from Barry Miles.

The first interview Miles did, published in IT on 16 January 1967, was with Paul McCartney, a friend of Miles - the two had met through Peter Asher, whose sister, Jane, was Paul’s girlfriend at the time. Later interviews that Miles did with, amongst others, John Lennon, George Harrison, Mick Jagger, Ed Sanders, and The Clash, feature in the archive, either on tape or as transcripts.

After a period as a freelance editor for Omnibus Press, Miles became a prolific writer, publishing 50 books, some of which have been translated into foreign languages. Not to mention the over 400 articles he wrote and his numerous contributions to other authors’ books. For his writing, Miles conducted meticulous research and many interviews, as it emerges from the number of research files and tapes he produced. Also included amongst the material relating to his publications are various drafts, notes, correspondence with editors, letters from fans and colleagues, publicity material, royalty statements, press reviews, and cover proofs. 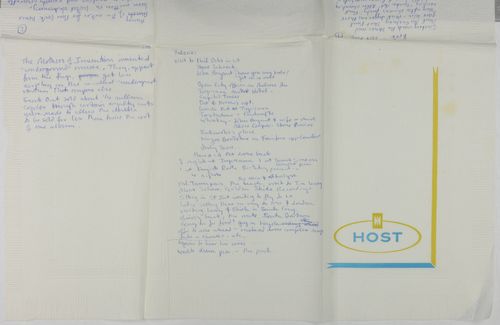 Handwritten notes by Barry Miles, on airline napkin. The material from these notes was used for many articles written by Miles, for magazines such as International Times, Hot Ratz, Changes. Reproduced with kind permission from Barry Miles.

His first ‘proper book’ was the biography of Allen Ginsberg, which took him five years to complete and for which Miles recorded 40 tapes of interviews with Ginsberg, his friends and family, now part of the British Library sound collection.

Biographies of other influential figures in Miles’s life followed including William Burroughs, Paul McCartney, Frank Zappa, and Charles Bukowski. His two memoirs, In the Sixties and In the Seventies, together with his London Calling, are detailed accounts of the London underground life and his major and minor players.

Included in the archive are also some rare, limited, special or signed editions of Miles publications, including an unauthorised reprint of his article 1970 ‘The Rebirth of Joy’, the 1973 catalogue of Lilia Aaron exhibition in Switzerland, a 1963 clipping of Miles's article How To Undress a Painting in Slate 2, the magazine of Gloucestershire College of Art, and a typed copy of Horde number 1, 1964. 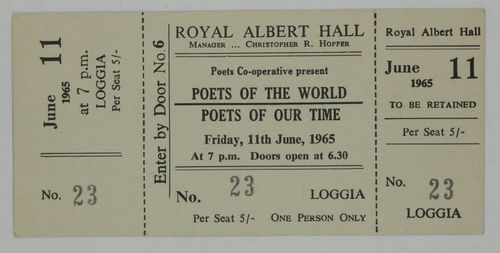 Unused ticket for Poets of the World / Poets of Our Time, Albert Hall poetry reading, 11 June 1965. Miles was involved in the organisation of the event.

Miles created files of reference material for items he used most frequently, mainly for publications or exhibitions. Amongst these are a Better Books paper bag, designed by John Sewell; an unused ticket for Poets of the World/Poets of Our Time, the first large-scale Beat generation reading in Europe at the Albert Hall poetry reading, on 11 June 1965, which Miles helped organise; Indica Gallery and Books photographs and flyers; and a leaflet for the party at the Roundhouse for the launch of International Times, 15 October 1966.

A few items from the Barry Miles archive, including a leaflet for The Roxy club and the first interview with the Clash, will feature in the forthcoming free exhibition Punk 1976-78, which opens on the 13th May 2016.

The catalogue of the Barry Miles archive is available online from Explore Archives and Manuscripts.

Posted by Joanna Norledge at 2:53 PM