Punk fanzine ‘Oh Cardiff... Up Yours!’ donated to the Library

The Library’s current exhibition Punk 1976-78 is an opportunity not just to look back at the early years of punk, but also to make new connections and to build on the legacy material that the Library holds.  The exhibition showcases examples of the fanzines inspired by punk’s DIY spirit and energy.  Forty years on, zinesters are still busy writing and drawing, cutting and pasting, stapling and sticking their creations, and the Library is as keen to collect zines now as it was during the first stirrings of punk. Publicity around the exhibition has also inspired some of the individuals who produced fanzines at the time to donate them to the Library so that they can be conserved and made available in our Reading Rooms.   We are delighted to have received a donation of the full run – all two issues – of a punk fanzine produced in Cardiff in 1978, Oh Cardiff… Up Yours!, from Paul Davies who was one of its creators. One of the hardest things for the exhibition is to convey the diverse meanings of punk for the fans who espoused its ethos and participated in it through their own expression and activism.  The fanzines we hold allow access to the voices of some of those involved in the heady days of punk.  I asked Paul to say something about what motivated him and his friends to produce a fanzine.  Paul’s account is reproduced below – in his own words. As a curator I’m delighted that Paul has written this piece, both for its interest now and for anyone looking at the zine in years to come to understand how it came into being.
I’m also struck by the way that producing a fanzine was a starting point for a whole range of creative endeavours for those involved. While I was thinking about how to present Oh Cardiff… Up Yours!, I came across a reference to it  from another of its co-creators, for whom it also remains significant, in a post on the urban75 blog. One aspect of my work in the Contemporary British Publishing team is to identify websites for inclusion in our web archiving programme, as part of the Library’s mission to capture a wide range of contemporary cultural and political expression. For me, it is inspiring to see this link between the punk activism of 1976-78 and contemporary social activism. Just as punk fanzines challenged the music coverage of the mainstream press,  the urban75 website was a pioneer of online activism providing an alternative to mainstream media, and it remains vital and vibrant today. It’s not always easy to explain the significance of zines and fanzines alongside the Library's more prestigious holdings. But whether for students of print journalism and the flagship magazines that have mediated Britain’s popular music and youth culture, or for future students of alternative and DIY culture, punk fanzine Oh Cardiff… Up Yours! marks the beginning of a journey into creativity and activism in print, film, and on the web, and from the record shops and venues of Cardiff to a global reach.  Paul’s account of its creation is no mere nostalgia trip: those two issues from 1978 are relevant for their part in a punk legacy that shapes cultural and political expression today, and I’m thrilled to have them in the Library. 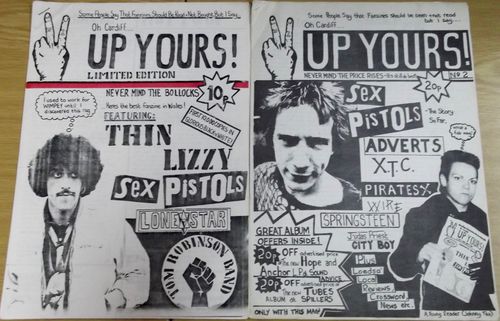 Oh Cardiff... Up Yours! issues 1 and 2.
Paul Davies writes:
Oh Cardiff... Up Yours!
The tendrils of punk rock began to wrap themselves around my flares-festooned ankles at a precise moment in time in the winter of 1976. If I had been partial to breakfast cereals, it would have been a splutter-the-cornflakes-across-the-room moment. Preparing for another tedious day at school, as we breakfasted in our small kitchen the necessity to engage in early-morning familial badinage was scuppered by the incessant drone of the local radio station.
On this particular morning the apoplexy count was in overdrive, as the Anarchy in the UK tour was about to hit the hot and happening Valleys enclave of Caerphilly – a desolate urban outcrop as far away from the bondage trousers of the King’s Road as it is possible to be, and yet, in its own malodorous, disenfranchised and truculent way, absolutely perfect to welcome the burgeoning social and political tornado that was Punk Rock.
As the New Musical Express was my bible, handbook and calling card, I was clearly prepped about this swaggering new musical movement emanating from that London, but had yet to experience the sonic thrills that were allegedly on offer, and was still hanging on, rather apprehensively, to my copies of ‘Frampton Comes Alive’, Deep Purple’s ‘Made in Japan’, my RAF Greatcoat and my luscious shoulder length hair.
‘Anarchy in the UK’ changed all that, and left me gasping for more. Four decades later the opening 20 seconds of that song still sound as feral, exhilarating, revolutionary as they did back then – the crunching powerchords just softening you up before Rotten grabs you by the throat and demands that you listen up “Right Now!” and then announces and introduces himself formally as the Antichrist and the Anarchist that an army of suburban home-owners would soon be threatening to garrotte, castrate and behead.
You didn’t hear this stuff on the radio, ever. To hear it on a local news radio station dealt an unstoppable knock-out punch to the solar plexus. If you were 17 and of a certain disposition, you responded in only one way – you embraced it, instinctively – you didn’t quite get what was going on (yet), but you wanted in – and you wanted all your friends in as well. Year Zero was here – time to reassess everything.
Like the most addictive drugs, the fired-up elation of the first hit sent you reeling in all sorts of directions as you sought and consumed anything related. The Pistols and the Clash were primo Class A stuff, but we were so hungry for cheap dirty thrills we even dabbled in Class B/C/D zones – from the Lurkers to 999, Eater to The Cortinas – all with a provincial charm of their own and a happy filler. 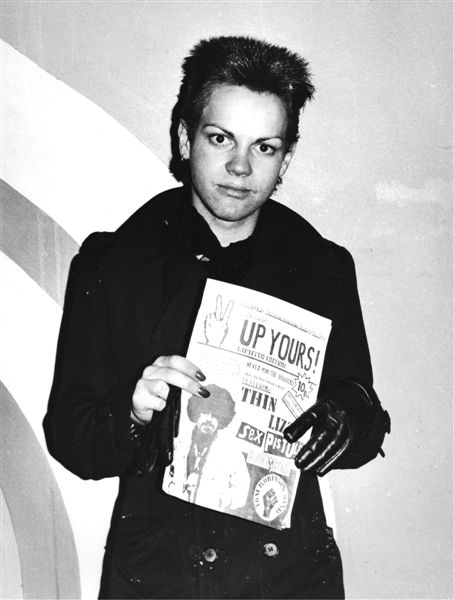 Musician turned environmental activist, John Evans of South Wales punk band the Tax Exiles
Cultural movements bring people together and punk was no different – a small circle of friends gravitated towards each other as we fell deep into this dizzying, angry, intoxicating maelstrom. 1977 was a great time to be 17/18. We were a gang of sorts, we hung out all the time, went to gigs religiously and inspired by punk, we plotted how we would vent our energy creatively. It had to be a fanzine.
Cardiff was ill-served by fanzines, we were going to resolve that and make our mark on a stultifying provincial scene, which needed a cultural rocket up its jacksy. We were more than happy to oblige. Being teenage wannabe punk warrior wordsmiths, the first step seemed to be finding appropriate noms de plume – that’s what punks did, didn’t they?
So we became, shamelessly, Mal Function, Cess Pitt, Rick O’Shea and Dai O’Rhea. Our photographer was already called Slug, so he didn’t need one. Then we needed a name for the fanzine. It had to be current, mildly inflammatory, a call to arms. We hit upon Oh Cardiff... Up Yours! Genius. With a respectful nod to the great Poly Styrene and X Ray Spex, we were on our way. 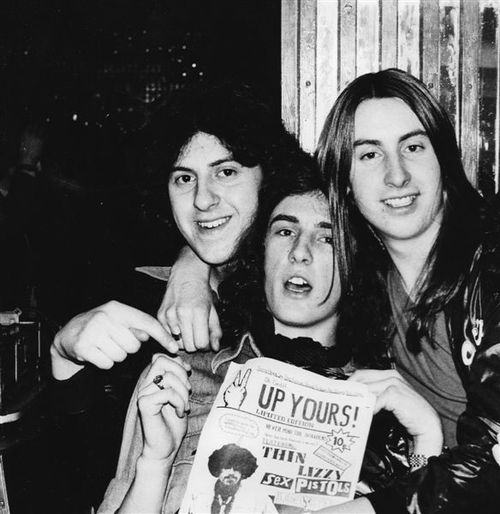 Rick O’Shea, Cess Pitt and Mal Function with the first issue
As most of us were happily unemployed we had plenty of time for our editorial meetings – fanzine content was shaped by the gigs we went to, the records we bought. We reviewed the gigs, singles and albums, interviewed the bands, then hastily typed it all up on an antique typewriter – with some assistance from one of our friends who could actually type. Ours was by no means a Stalinist punk manifesto – the uneasy mix of bands we covered reflected the transitioning of our musical tastes – we’d cover local punk oiks The Tax Exiles as well as bands like Thin Lizzy.
We devoured the ethos of punk greedily, if not the haircuts – contemporaneous photographs provide damning evidence of shoulder-length hair and inappropriate clothing not approved by the Punk Politburo. Wearing a Thin Lizzy tshirt and customising jeans with a ripped and burnt Union Jack with stencilled Sex Pistols lettering seemed somehow more punk than buying a pair of tartan bondage trousers from Paradise Garage in Cardiff. 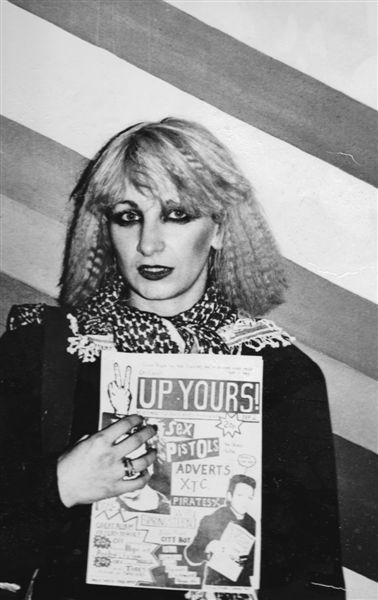 Bette Bright of influential Liverpool art rock / new wave band Deaf School
Our prehistoric approach to desktop publishing amounted to cutting out pictures from the NME, cutting out the typed reviews and messily gluing them to sheets of A4. Page titles were hand-crafted, a few cartoons thrown into the mix, and then off down the printers to whack out a hundred copies of issue 1. This figure was later inflated when we got our first press coverage in the staid local rag – fiercely competing with a couple of other ’zines which had sprung up since we published, we brazenly bumped up our circulation to 250.
The thrill when we picked up those first boxes of actual fanzines was intense. We’d done it!. A few hours of stapling and we were ready to hit the streets. There were plenty of gigs taking place in Cardiff, at the Top Rank, the University and two local arts centres, so we just hung about before and after gigs, and miraculously sold the lot.
Emboldened by this, we doubled our print run, and the cover price, and did it all over again, hitting up a couple of local record shops which agreed to stock the fanzine. The reaction was almost universally positive – fearless truth-tellers that we were, we gave an uncomplimentary review to a local punk band, who seemed hell-bent on giving us a good kicking until we managed to persuade them that we didn’t actually write the thing, we just sold it.
And then that was it. Like all the best things that came out of punk, we blasted in for two issues and then burnt out. Circumstances conspired to separate us geographically, punk was blowing itself out and we all moved on to other things. 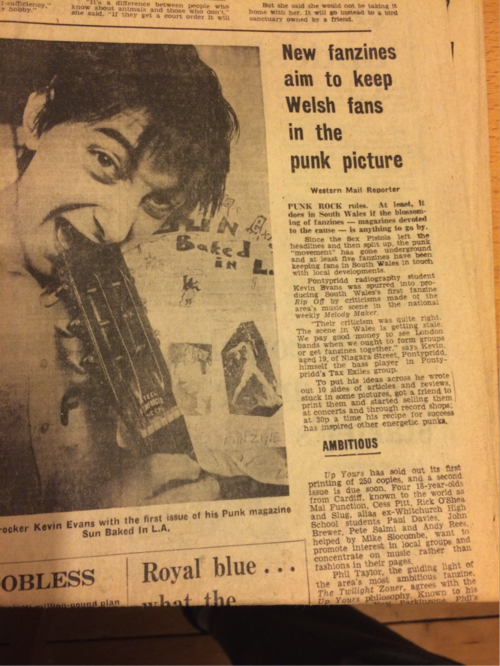 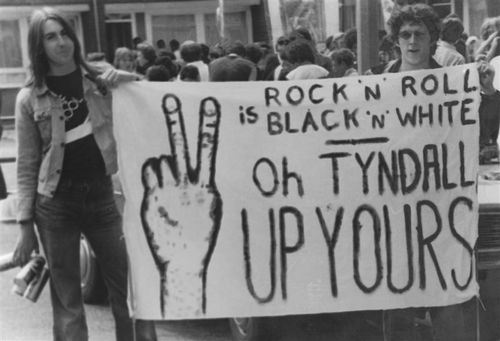 Oh Cardiff... Up Yours! banner at anti-National Front demonstration