Delving into the Laurence Olivier Archive: fan letters and Macbeth

Laurence Olivier was one of the great Shakespearean actors of the 20th century, who enthralled theatre audiences with his magnificent performances of Shakespeare’s leading men. He brought Shakespeare to the screen with his films of Hamlet, Richard III and Henry V, which he wrote, directed and starred in. These films can still be enjoyed by those who never had a chance to see him on stage. We can discover fascinating insights into Olivier’s Shakespeare productions by examining his own annotated scripts. We can also view correspondence, photos, and even fan mail, relating to his Shakespeare plays.

These can be found in the Olivier Archive, which the BL purchased from the Olivier family in 1999. It is a vast archive, containing nearly 1000 files. The BL reference numbers for the whole archive are Add MS 79766-80750.

Anyone with a valid BL reader pass can view items from the archive in the BL Manuscripts Reading Room. Please see this link for the BL Archives & Manuscripts Catalogue, if you want to search it yourself: http://searcharchives.bl.uk/ .

Olivier was involved in so many Shakespeare plays it was necessary to pick one as an example. Macbeth seems a good choice because Olivier’s enthusiasm for the role, in which he excelled, means there are plenty of Macbeth-related items in the archive. Also, it’s familiar to many of us who studied it at school! Olivier appeared in the title role at the Old Vic in 1937. Macbeth is traditionally associated with bad luck and this production was no exception. According to the Old Vic website, manager Lilian Baylis died on the day of the dress rehearsal; Olivier narrowly avoided a falling stage weight; and the director and lead actress were in a car accident. To cap it all Lilian’s portrait fell off the wall!

There was an early TV broadcast by the BBC of scenes from this adaptation. It is described on this website: http://bufvc.ac.uk/shakespeare/index.php/title/av71012 . A file in the archive, Add MS 79975, contains ‘correspondence, mostly fan mail sent to Olivier, for his Old Vic performances of Henry V, Hamlet, and Macbeth: 1936-1938’.

Having spent an entertaining hour searching the file for a memorable fan letter about his Macbeth performance, I was thrilled (and appalled at the same time) to read an eight page critical analysis from, “a much older man who has followed your career with interest & sometimes enthusiasm”. According to the writer of the letter, Shakespeare himself would not have performed the role in this manner!

Apparently, Olivier’s reading fluctuates “between Richard III, Shylock (especially in make-up) & Lear”, his dagger scene “kills the ascending tension stone dead”, he shouts after the murder, and ruins the “Tomorrow, and tomorrow, and tomorrow” speech by his stage movements.

More comments follow about Olivier’s “fatal” makeup and “raucous” voice and the letter concludes “that these criticisms are offered in the genuine, though possibly presumptuous, desire to serve”.

Who wouldn’t wish to be a fly on the wall when Olivier finished reading this letter? I wonder if he took on board these pointers and improved his subsequent performances! Alas, there is no evidence that he replied.

The file contains letters from other fans expressing more traditional admiration. There is also a letter from Lilian Baylis, dated 19/9/36, thanking him for his gift of “cyclorama”. If anyone is unfamiliar with the word “cyclorama” (I was), the OED entry says it is:  “Theatr. A large backcloth or wall, freq. curved, at the back of a stage, used esp. to represent the sky”.

Laurence Olivier and Vivien Leigh performed together as Macbeth and Lady Macbeth, at the Shakespeare Memorial Theatre, Stratford, in 1955. 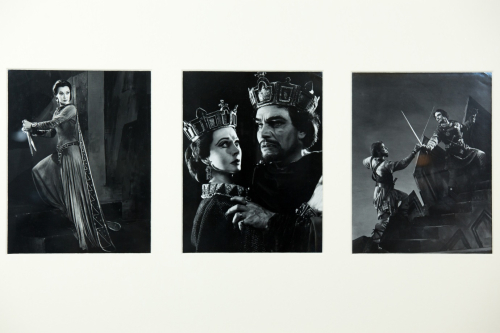 BL Add MS 80731. Photos of Laurence Olivier and Vivien Leigh, in the 1955 Stratford production of Macbeth.

Vivien Leigh’s costume from this production is displayed in the Shakespeare in Ten Acts exhibition at the British Library, which runs until 6th September 2016. Here is the link for details of the exhibition: http://www.bl.uk/events/shakespeare-in-ten-acts

Critics such as Kenneth Tynan raved about Olivier’s Macbeth but were less impressed with Vivien Leigh’s Lady Macbeth. Tynan didn’t think much of any of her performances at this time, but apparently changed his mind in later life. The following files relate to this particular production: Add MS 80299 Correspondence and papers relating to Titus Andronicus, Macbeth, and Twelfth Night. Shakespeare Memorial Theatre, Stratford-upon-Avon; 1954-1958; Add MS 80682 Cuttings relating to Plays at Stratford, and elsewhere; 1954-1957: Macbeth; Twelfth Night; Titus Andronicus; The Deep Blue Sea; The Entertainer; Add MS 80731 Photograph Album of Olivier and Vivien Leigh in the Stratford productions of Titus Andronicus and Macbeth. Some of these photos are currently on loan to the Library of Birmingham for their Shakespeare exhibition, which runs until 3rd September 2016. Here are details of the exhibition: http://www.libraryofbirmingham.com/event/Events/ourshakespeare.

Imagine how fabulous a film, with Laurence Olivier as Macbeth and Vivien Leigh as Lady Macbeth, would have been! Olivier put a huge effort into planning a film version of Macbeth but, unfortunately, lack of funding prevented it. The archive holds nine folders (Add MS 80508-80516) of papers relating to Olivier’s unsuccessful attempt to make the film, including set designs, photographs of potential locations and production budgets. There are also 13 drafts of screenplays (Add MS 80534-80546). 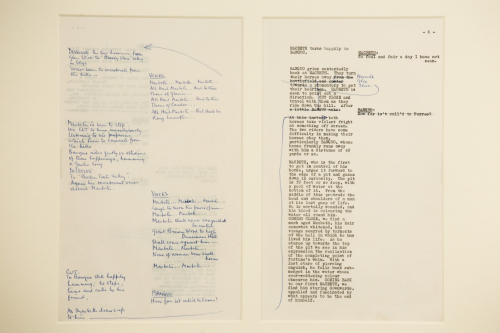 BL Add MS 80537. Unbound sheets from one of the 13 draft screenplays of Macbeth, with extensive annotations in ballpoint pen by Olivier. These pages show the scene where Macbeth and Banquo encounter the witches.

The BL holds the archives of many other 20th century theatre greats, who were contemporaries, friends and colleagues of Laurence Olivier. These include: John Gielgud (Add MS 81306-81590) Alec Guinness (Add MS 89015) Kenneth Tynan (Add MS 87715-88472) All of the above were involved in various Shakespeare productions, including Macbeth, whether it be as actor, director or writer. I’ll save their archives for next time!

If you’re planning to visit the BL Shakespeare exhibition, you might like to enhance your experience with a talk from a reference expert about Shakespeare-related items in the BL’s vast collections (not all of which could be included in the exhibition). See this link for details: http://www.bl.uk/events/shakespeare-revealed-into-the-collections

Posted by Joanna Norledge at 9:44 AM