by Greg Buzwell, Curator of Shakespeare in Ten Acts

William Shakespeare’s A Midsummer Night’s Dream lends itself to spectacular visual excess. After all, if you can’t go over the top with a comedy set in a magical moonlit-woodland and populated by mischievous fairies then when can you? Many Victorian productions of the play concentrated almost exclusively on spectacle, cutting Shakespeare’s text and adding hosts of Amazons and allegorical processions celebrating the triumphs of Theseus, including his victory over the Minotaur. Herbert Beerbohm Tree’s production of the play in 1900 even went so far in its efforts to heighten the air of woodland magic as to include live rabbits hopping across the stage. 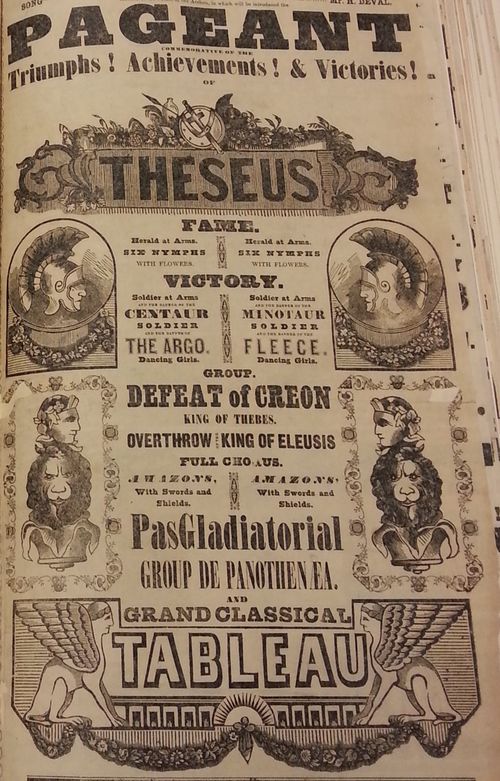 An extract from an 1847 playbill for A Midsummer Night’s Dream Playbills Vol 262, item 261

Later, in the 20th century, film adaptations of the play appeared. A 1935 Hollywood film of Dream directed by Max Reinhardt and starring James Cagney as Bottom included dozens of extra fairies and a Satanic-looking Oberon on horseback accompanied by a troop of bat-winged henchmen. The set included sixty-seven truckloads of trees and shrubs (including a transplanted redwood tree) and covered over sixty-six thousand square feet. Blending in with this jungle-like excess Mickey Rooney, according to one observer at least, played Puck as though he were ‘the son of Tarzan’. The spectacular dance scenes featuring Titania’s attendants were choreographed by Bronislava Nijinska, formerly of Diaghilev’s Ballets Russes. For Hollywood, if A Midsummer Night’s Dream was worth doing, it was worth overdoing. 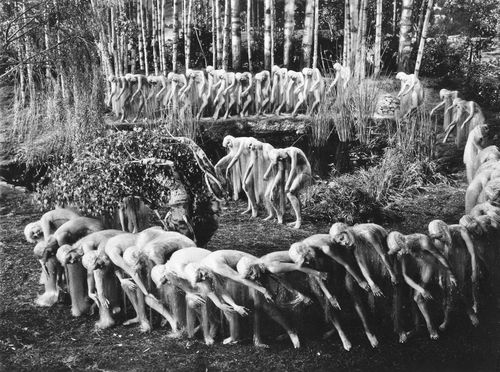 A play not noted for its restraint: a scene from the spectacular 1935 Hollywood adaptation of A Midsummer Night’s Dream. Warner Bros / The Kobal Collection

In 1914, attempting something different, the theatre director Harley Granville Barker staged the play at the Savoy Theatre in a fashion that eschewed extravagance in favour of suggestion and symbolism. When the production came to Manhattan in 1915 Barker explained his challenge to realism and visual excess by observing: ‘What is really needed is a great white box. That’s what our theatre really is’. The world may not have been ready for such an interpretation in 1915, but in 1970 ‘a great white box’ is exactly what it got. 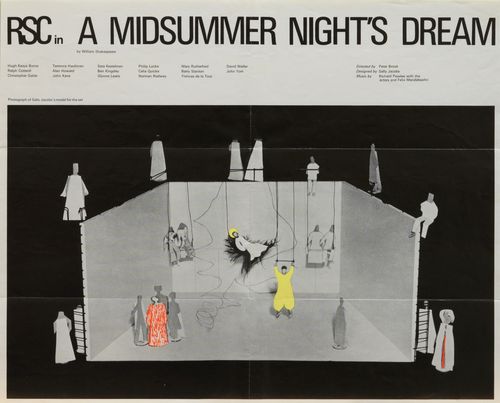 The director Peter Brook probably knew nothing of Barker’s comment, but Brook effectively restated Barker’s challenge to illusionistic theatre a half century later. Brook, along with his designer Sally Jacobs, devised a white box setting for their 1970 production of the play in Stratford-upon-Avon. Large metal coils represented the woodland; a spinning plate on an acrylic rod became the flower containing the magic potion Puck fetches for Oberon; Puck entered the stage on stilts while Oberon descended to the stage on a trapeze. Circus tricks replaced the fairy magic. The intention was to move the play away from realism altogether and into the heightened realm of metaphor. Originally black drapes had hung behind the white box stage design but during the Paris leg of the world tour Brook removed them. Suddenly everything could be seen, including the tower-like structures from which the cables supporting the trapezes were fixed. The actors playing the fairies could be observed on the catwalk that ran around the top of the set, watching the action during the scenes in which they were not required. The creation of artifice and illusion was no longer of paramount importance.

The small cast was also at odds with traditional productions. Brook liked the dream-like associations of doubling given by many of the actors playing dual roles, recognizing that a small ensemble of performers would not only enhance the quality of actor involvement but also heighten the sense of dream-like theatrical metaphor. The costumes were far removed from the usual elaborate designs, rich fabrics and gossamer threads. Puck, played by John Kane, wore a yellow jump suit and a blue skull cap inspired by the costumes Brook and Jacobs had seen Chinese acrobats wearing in Paris. The young lovers meanwhile, the men in their tie-dyed shirts and the women in long white dresses, brought a touch of the ‘here and now’ to the production. The first staging of the play in Stratford took place in August 1970, not long after the 1967 summer of love and the student riots in Paris the following year. A Midsummer Night’s Dream can be seen as many things, but on one level it is a drama about youthful rebellion - perfect for the late-1960s zeitgeist of sexual freedom and the desire to escape stale orthodoxy. 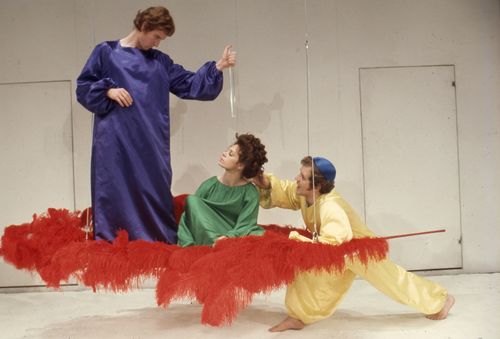 Reviews of Brook’s Dream, as it became known, were largely positive. The reviewer in the Sunday Times wrote: ‘more than refreshing, magnificent, the sort of thing one sees only once in a lifetime, and then only from a man of genius’. Inevitably there were a few dissenting voices – the New Statesman commented that Brook had ‘remoulded’ the play ‘with the help of Billy Smart, Walt Disney, J. G. Ballard and … his own sleeping, hallucinating self’ (although that in itself sounds utterly amazing). Perhaps above all else the production showed that it was possible to put a completely new spin on Shakespeare, transforming a play with a tradition of performance stretching back over 350 years into something new, strange, challenging, inventive and wonderful.

Peter Brook’s 1970 staging of A Midsummer Night’s Dream is one of the productions explored in detail in Shakespeare in Ten Acts. Peter Brook will be giving a talk entitled ‘The Esoteric and the Profane in Shakespeare’ at the British Library on the afternoon of Wednesday 15th June and there will be a panel discussion about the 1970 production of Dream, featuring Peter Brook, Sir Ben Kingsley (who played Demetrius) and Frances de la Tour (who played Helena) later that evening.

Posted by Joanna Norledge at 11:36 AM