P is for Printess: New Acquisition 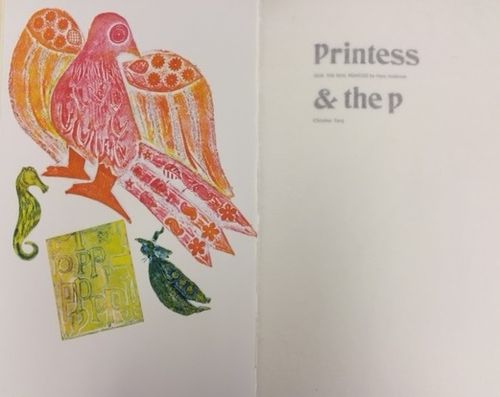 Christine Tacq’s latest artist’s book Printess & the p is a reimagining of the timeless Hans Christian Andersen fairy tale about a young woman who proves her nobility to her suitor prince, by detecting a pea through twenty feather mattresses. Only a princess would be so sensitive to be awakened by a pea. In this version, it is a woman printer, or ‘printess’, who is the person of discernment. 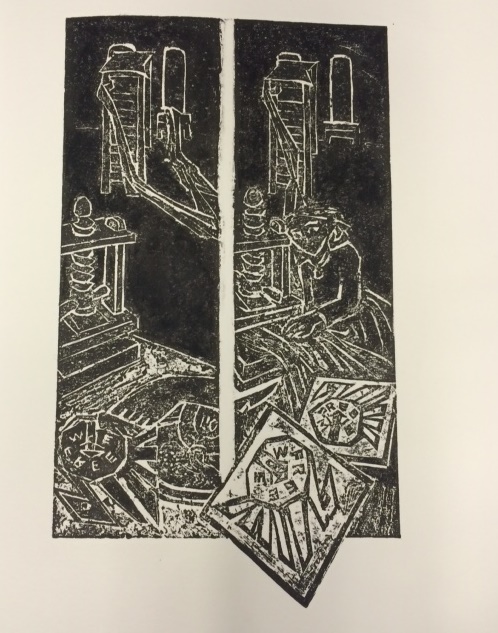 The first thing that is striking about Tacq’s latest work is the interspersed monotone plates sit in sharp contrast to the vibrant rich imagery of the colour spreads illustrating the narrative. This contrast is beautifully underpinned by using different paper. The colour reliefs are printed on Zerkall paper, while, intaglio collagraphs are on Fabriano paper. By cleverly changing the medium it reinforces the initial contrast at the physical as well as on a visual level. 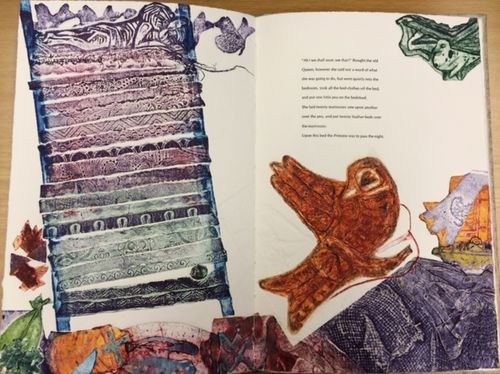 The theme of contrast extends to the depictions. The seven richly coloured double-page spreads juxtaposed with the far more vulnerable black and white which offers an intimate glimpse into an inner darker world. Some of these prints spill out from the confines of the frame with hard edged intaglio  printing as if attempting to burst out from the page and ape the freedom a vibrancy depicted in the colour plates. Tacq’s skill as a book artist are illustrated in the way this volume unravels and draws in a complex range of themes and concepts, techniques; - and then presents them in such an appealing way. Her use of Optima for the text balances with the rich relief collagraphs

The Printess &the p was published in July 2014, it is a first edition of twenty five copies. The volume was printed by p’s &q’s Press, Thame in Oxfordshire and bound at the Fine Book Bindery.

The covers are bound in hand-printed linen designed with relief-blocks and comes in a linen slipcase. 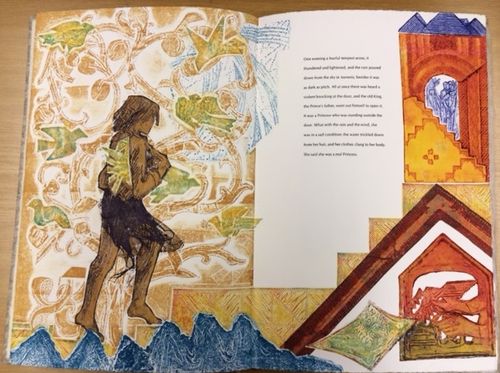 The images are created using the collagraphy technique in which the plate is constructed of adhered elements and inked with a roller or brush to produce in both relief and intaglio, and an embossed impression can be obtained by printing the plate dry without inking. 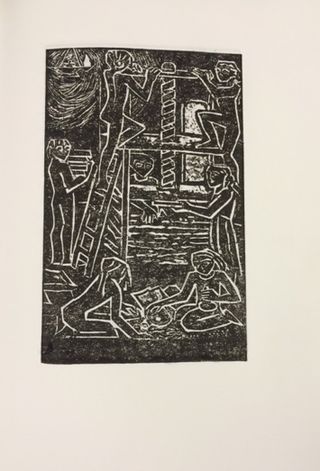 The way the imagery and the narrative intertwine to create this volume weighted with powerful subtexts which engage with concepts of feminism and identity. In some respects it offers a self-portrait of a printer.

On returning the volume to its slipcase one evening after working with it I noticed a small piece of paper squashed in to the back of the slip case. On retrieving and unfolding it, it read:

Because of the way the creases appear it was possibly placed on the spine as part of the quality assurance process. Nevertheless, to come across such a note adds to an authenticity of the artistic process and speaks to the huge range of skills and processes it takes to create a tome of such outstanding quality.

The Library’s copy of the Printess &the p will be accessible at British Library shelfmark RF.2016.b.35. in the near future.

Images reproduced with the kind permission of Christine Tacq.

Posted by Joanna Norledge at 10:32 AM