by Melissa Addey, 2016 Writer in Residence at the British Library, funded by the Leverhulme Trust

As a writer of historical fiction, my favourite item at the British Library so far has been a letter in the Treasures of the British Library permanent exhibition. It’s a dark and shadowy space, with delicate lighting placed here and there so that you can make out the precious items on display.

The letter is from both Anne Boleyn and Henry the 8th, to Cardinal Wolsey. On a single page, Anne begins the letter, asking about the progress of the desired annulment of Henry’s first marriage to Katherine of Aragon. The second half of the page is from Henry. “The wrytter of thys letter wolde nott cease tyll she (had caused me likewise) to sett to my hand; desiring yow, thowght it be short, to (take it in good part)”. In other words, Anne has nagged him to complete the letter and add his own nudge to the Cardinal.

It’s special for a number of reasons. To actually see the item is to know that these two people, so famous in our history, both held this page in their hands. It has their handwriting on it, such an intimate thing about a person, so peculiarly theirs.

Handwriting is something we are losing: I used to know exactly what my friends’ and family members’ handwriting looked like. I now have friends whose handwriting I don’t believe I’ve ever seen. The letter has their tone of voice. Henry’s reference to Anne nagging is really quite funny. It tells you something about their relationship at the time and makes you wonder how many of these letters were sent, gradually increasing from jocular confidence to frustrated rage. The letter is dated August 1528, quite early on in Henry’s attempt to marry Anne, something that didn’t happen for another five years. Seeing something like this is to reach back and touch history, to see people as human rather than legend.

When researching for a historical novel, it’s these items you’re desperately searching for. Not the big dates and official accounts, the official court robes and formal proclamations, although you have to have those as your backdrop. It’s the tone of voice and the scribbled asides, the letters and diaries, children’s toys and defamatory handbills, hearing the crack in someone’s voice. These are what let us touch history.  Because of my residency I’ve been spending a lot of time at the British Library and these up-close brushes with history are endlessly fascinating.

Currently the British Library’s Literary and Creative Archives and Manuscripts team are working on trying to acquire complete archives, such as diaries, manuscripts and collections of people like Alec Guinness (one of his letters to Evelyn Waugh includes the great line: “Graham’s last play seemed BONKERS to me…”), Hanif Kureishi (see some of the Kureishi Archive on our online learning resource Discovering Literature: 20th Century) and Kenneth Williams. 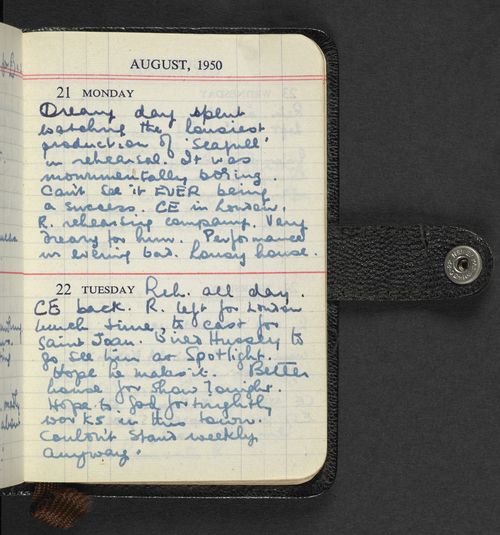 A page from the diaries of Kenneth Williams

Seeing these items, reading through them, looking at the notations or signatures, the rants or the ponderings, is like sitting next to that person and watching them be themselves. Not a front put on for others but their own selves, the people they are underneath. 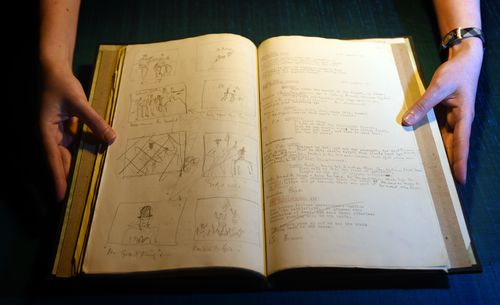 In the current Shakespeare in Ten Acts exhibition at the British Library I stood with earphones on and quickly pushed buttons, hearing actors from Laurence Olivier to Kenneth Branagh and David Tennant say “To be or not to be’. I didn’t listen to the whole speech, just that one line and even in that line, with over ten actors, there was such a variety of choice and meaning to just six words. It made you think about the role and the person portraying Hamlet, the decisions they must have made in rehearsals, their own understanding of the text. It was a strange and intimate auditory experience and more personal than you would expect. As is a Christmas greeting message from the Beatles to their fan club: extraordinarily unpolished by today’s standards but unmistakably them.

Touching history should not be a smooth and polished affair. It should be rough and dirty. It should leave you with your fingers bleeding, your eyes open wide and a gasp or a giggle in your mouth. I’m off to trawl through the archives again.

Posted by Joanna Norledge at 4:17 PM