Over the next three weeks the curators of Shakespeare in Ten Acts will be picking their favourite items from the exhibition. First up is Zoë Wilcox.

Having curated Shakespeare in Ten Acts, I must admit somewhat sheepishly that my favourite item in the exhibition is actually not one that’s directly related to the man himself. It’s a document that hung backstage in an Elizabethan playhouse, the one last trace of a lost Elizabethan play called The Dead Man’s Fortune in which Shakespeare’s friend Richard Burbage appeared. 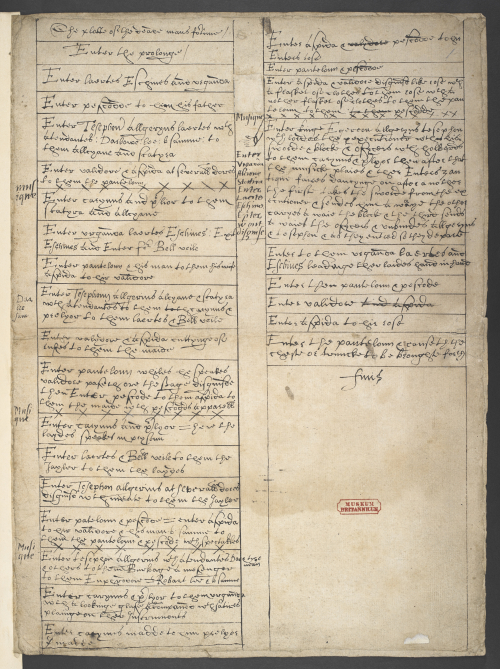 This type of document is called a ‘stage plot’ and it would have helped the cast to know when to make their entrances since they were only given their own parts and cue lines rather than the entire script of a play. There are only six of these stage plots still in existence: five here at the British Library and another (for the second part of The Seven Deadly Sins) at Dulwich College. The example on display in Shakespeare in Ten Acts dates from the 1590s and is especially significant because it records that the theatrical star Richard Burbage was part of the cast, though what part he played remains the subject of argument.

Everything we know about The Dead Man’s Fortune comes from this one document and although we can’t be certain who wrote the play or where it was performed, it’s surprising just how much can be gleaned from one piece of paper. Back in the 1930s the scholar W. W. Greg tried to piece together the story of the play, the main points of which I will summarise here:

There are two girls who are in love with two boys, but the girls have wicked fathers who would prefer them to marry suitors of their own choosing. The fathers throw the girls in prison for refusing to marry the beaux they have selected and then plot to drug their daughters (with poisoned meat) to make them do their bidding. Enter a magician called Urganda who helps to release the girls. The fathers and the evil suitors are condemned to death. Cue magic show, dancing fairies and a happy ending in which all are reconciled and the wicked men are pardoned. Oh, and a ‘chest or truncke’ is brought on stage, presumably containing the dead man’s fortune - but no one has quite been able to explain how that fits with the rest of the plot.

While the precise details of the story remain a matter of conjecture, it’s clear that this is a play with many elements that are familiar to us from Shakespeare’s comedies. For a start there are disguises (‘validore passeth ore the stage disguisde’), which we tend to associate with Shakespeare though they were really the trademark of the dramatist John Lyly. There’s a comic sub-plot with familiar commedia dell’arte characters. And there is also a foreshadowing of The Tempest (written c. 1610-11) in the magic tricks that Urganda uses to punish the evil-doers before all is forgiven at the end of the play.

The plot is written on two sheets of paper pasted onto each side of a pulp board measuring 16 x 12 inches. If you look closely you can see the trace of a rectangular hole in the centre gutter which would have enabled the paper to be hung up backstage, but this was filled in by the British Museum at some point prior to 1930. Though written in secretary hand, you can easily pick out the word ‘Enter’ which denotes the beginning of each new scene, apart from at the end of the play where the system appears to have gone slightly haywire. Props are mentioned - such as a looking glass, a hangman’s block and a ‘flasket’ of clothes - to remind the actors not to forget these. Interestingly, the mention of the ‘tyre man’ in the right hand margin has been interpreted as a sign that the wardrobe master was required to stand in as the company was short of an actor. The other noteworthy annotations are the music cues which appear in the margins and indicated by lines of crosses. These interludes divide the play into a five act structure, but they are later additions in a different hand, suggesting that the play was originally performed straight through without intervals as was customary in the outdoor playhouses.

While most of the cast are referred to by their character names, some actors’ names are also used and that’s how we know that ‘Burbage’ appeared in The Dead Man’s Fortune (Richard was the only member of his family who is known to have acted). His name is visible just after the third music cue followed by the words ‘a messenger’. Could the great Burbage who later played Hamlet, Macbeth, Lear and Othello really have been a mere messenger in this play? It’s not clear. W. W. Greg thought it unlikely and suggested that Burbage, who would have been in his twenties at the time, may have played Urganda the magician but others disagree. 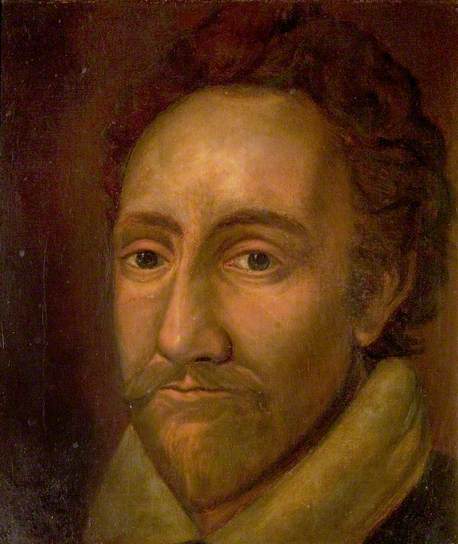 Ultimately this is my favourite item in the show because it immediately transports me into the world of the playhouse and not just that, but behind the frons scaenae into the private world of the actors. If documents could talk, what stories would this one have to tell? What backstage arguments, gossip or pranks might have taken place beneath this plot as it hung on its humble peg? We’ll never know but we can imagine. Come and see for yourself in Shakespeare in Ten Acts which runs until 6 September.