The Mystery in the Mystery Novel: Does William Henry Fox Talbot appear in Wilkie Collin’s The Woman in White?

Wilkie Collins (1824-1889) was a popular Victorian novelist who is credited with publishing both the first ‘sensation’ novel The Woman in White (1859) and the first modern English detective novel The Moonstone (1868). One of the many reasons his novels were so popular was his clever characterisation and his sharp satirical observations concerning the social conventions of Victorian England.

There is one passage in the The Woman in White that deals with Frederick Fairlie Esquire, the misthanthropic, hypochondriac aesthete, who having married off his ward, the beautiful Miss Laura Fairlie, and freed from his responsibility towards her, sets about recording his real love his ‘treasures and curiosities’.

‘His last caprice has let him to keep two photographers incessantly employed in producing sun-pictures of all the treasures and curiosities in his possession. One complete copy of the collection of the photographs is to be presented to the Mechanics’ Institution of Carlisle, mounted on the finest cardboard, with ostentatious red-letter inscriptions underneath. ‘Madonna and Child by Raphael. In the possession of Frederick Fairlie, Esquire. Copper coin of the period of Tiglath Pilesar. In the possession of Frederick Fairlie, Esquire.’ ‘Unique Rembrandt etching. Known all over Europe as THE SMUDGE, from a printer’s blot in the corner which exists in no other copy. Valued at three hundred guineas. In the possession of Frederick Fairlie, Esquire.’ Dozens of photographs of this sort, and all inscribed in this manner, were completed before I left Cumberland, and hundred more remain to be done.’

What Wilkie is satirizing here is the mania for collecting and categorizing all manner of objects which, presaged by the establishment of the British Museum in 1753, reached a manic apotheosis in the Victorian era. Wilkie’s description of two photographers producing ‘sun-pictures’, or photographs, of various objects to order is an unusual one and the inspiration for this passage, I believe, is William Henry Fox Talbot today recognised as the originator of negative-positive photography. 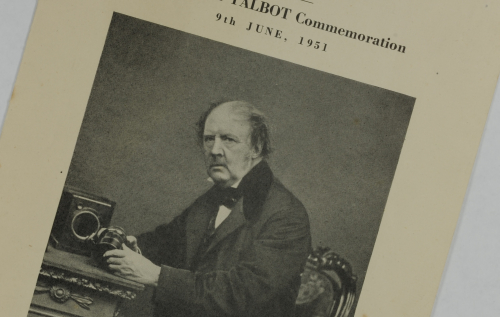 Detail of a cover for a programme produced by the Reading Camera Club for the ‘W. H. F. Talbot Commemoration, 9th June, 1951'. Despite events like this, much like Wilkie Collins, Talbot languished in relative obscurity until being rediscovered in the late 1970s. NTA: 30727. (Add MS 88942/3/2/1).

At the time of the publication of The Woman in White Talbot was well-known as the former patent holder of the Calotype photographic process in which a negative image was produced by exposing chemically treated paper to light. Multiple positive images could then be produced from this negative. This idea was the basis for all photography until the advent of digital photography.

Talbot had been working on producing photographs, although at the time they were known as ‘sun pictures’, since 1839. He had patented the Calotype process – also known as the Talbotype - in 1841 and had become somewhat unpopular among both amateur and professional photographers for his numerous legal prosecutions in defence of his patent. He responded to criticism by pointing out that he had spent nearly £5,000 of his own money developing the Calotype process. 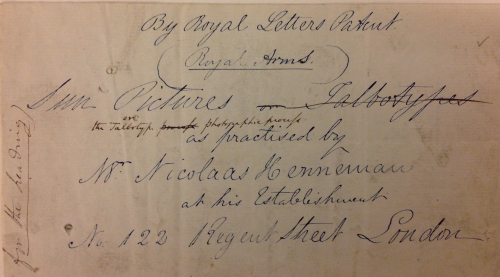 ‘By Royal Letters Patent. Sun Pictures or the Talbotype photographic process’ (undated). NTA: 24281 (Add MS 88942/1/350). The Regent Street establishment was started after the Reading one but neither was successful.

In 1843 Talbot provided the capital for the setting up of a photographic ‘establishment’ at Reading, run by two associates Nicolaas Henneman and Thomas Malone, in order to mass produce photographs. Wilkie’s image of ‘two photographers incessantly employed’ would seem to suggest some sort of industrial process and indeed the publicity image for the Reading establishment below shows photographers with a variety of objects and people both taking and developing photographs.

A year after setting up the Reading Establishment Talbot published The Pencil of Nature a volume of original photographic prints, the first of its kind, of various scenes and objects complete with descriptive text. 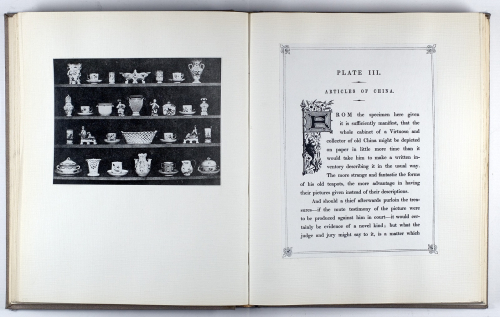 Image and text for ‘Articles of China’ from The Pencil of Nature (1844). Talbot saw the potential of photography not only as an art, but also as a way of objectively recording objects. http://www.medienkunstnetz.de/works/pencil-of-nature/

Below is part of the text that accompanied plate III ‘Articles of China’,

‘From the specimen here given it is sufficiently manifest, that the whole cabinet of a Virtuoso and collector of old China might be depicted on paper in little more time than it would take him to make a written inventory describing it in the usual way. The more strange and fantastic the forms of his old teapots, the more advantage in having their pictures given instead of their descriptions.’

Reading this text it’s easy to imagine that this may have been the source of Wilkie’s satire. However, by 1859, there were many photographers producing any number of photographs on any number of subjects and doing so in studios set up precisely for that purpose most of them using the wet collodion process, developed by Scott Archer in 1851 in which a photographic negative was created by exposing a glass plate painted with a photo-sensitive solution. This technique had largely superseded Talbot’s own process primarily because Archer hadn’t patented it; he died penniless and destitute.

So besides Wilkie’s passage being about photography and its use as an instrument for cataloguing and recording objects by a team of photographers what specifically points to Talbot being the inspiration behind it? 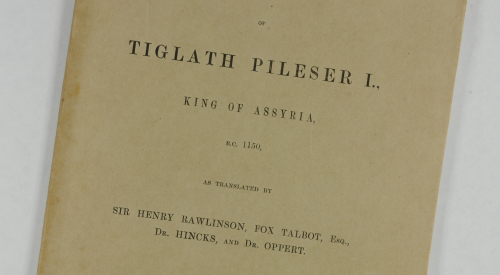 In the early 1850s Talbot had become interested in Assyriology, the scholarly study of the history, archaeology and culture of Mesopotamia (present-day Iraq).

The lexicon for Assyrian cuneiform had been developed primarily by Sir Henry Creswicke Rawlinson (1810-1895) and Edward Hincks (1792-1866) and there was much scholarly scepticism regarding the accuracy of translations. To counter this Talbot organised the simultaneous translation, by himself Rawlinson, Hincks and Julius Oppert (1825-1905) of a recently discovered text relating to the Assyrian king Tiglath-Pileser I (c. 1115-1077 BC). When the translations were examined by a panel of independent experts they were found to be so similar that it was concluded that Rawlinson and Hincks’s lexicon was indeed valid. These collected translations were published as a single volume Inscription of Tiglath Pileser I by the Royal Asiatic Society in 1857 only two years before the publication of The Woman in White.

Therefore it is Wilkie’s specific reference to ‘Tiglath Pilesar’ that, in my opinion, confirms William Henry Fox Talbot, as the most likely inspiration for this passage in The Women in White.

Posted by Joanna Norledge at 4:24 PM