Zine but not heard: printed ephemera and research

The British Library’s Punk 1976-1978 exhibition, marking punk’s 40th anniversary, hits some familiar and satisfying beats. Malcom McLaren as Situationist svengali; the Sex Pistols as trend-setting provocateurs; the cut-and-paste, DIY aesthetic of the posters and record sleeves that mushroomed up between 1976 and 1978. More than 100 audio selections feature everybody from the Adverts to X-Ray Spex. A less familiar element emerges from a glass box of fanzines – Alternative Ulster, Bored Stiff, Suburban Press, Secret Public, – that testify to punk’s status as a national scene that reverberated far beyond the King’s Road and the Roxy. 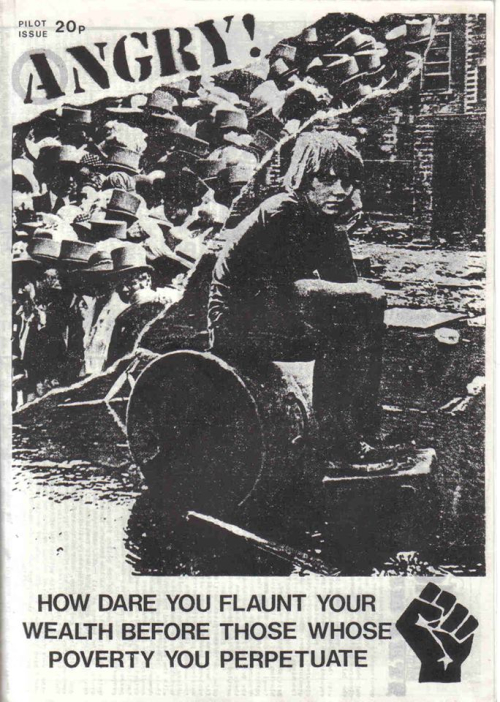 Fanzine created by and reproduced with kind permission of Chris Low

In Roger Sabin’s excellent 1999 collection of essays on the cultural legacy of punk, Paul Cobley makes an obvious point that bears repeating. Describing the hassle-laden experience of being a teenage punk in 1970s Wigan, he says: “Among the many myths of punk rock, probably the most insidious is that it was an entirely London-based phenomenon.” This myth has been pretty thoroughly deflated, of course, but a look at the zines in the library’s collection adds another puncture – Cobley adds that although provincial punk rock may be less spectacular than its London counterpart, “this is no reason to write it out of history”.

We have punk zines from Cardiff (Oh Cardiff, Up Yours!), as displayed in another recent blog post), from Nottingham (Repeated Patterns), from Belfast (Alternative Ulster), from Cornwall (Barricade) and from Aberdeen (Granite City). They display a lively and self-conscious engagement with the myth of punk on the part of participants in the scene, many of whom identify not only against a putative mainstream culture but also against the metropolitan, or trendy, London punk scene. For a researcher trying to understand punk as inchoate and localised and specific, or trying to map its regional manifestations beyond the usual periodization of 1976 to 1978, these are an invaluable resource. 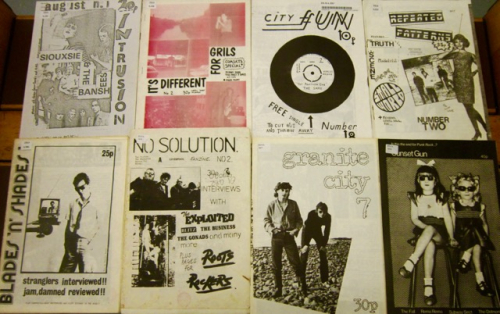 Looking at zines as a way of historicising and contextualising the punk scene allows us to re-map its connections to other youth cultures of the 1970s and 80s, creating a fuller and more colourful picture. As Matt Worley has shown, zines also help to chart the line between punk and politics on both a local and a national level. At their best they offer up very personal, very direct evocations of cultural affiliation that both complicate and enrich our understanding of what is meant by ‘punk’.

And on International Zine Day, it is worth stressing the importance of these kinds of publications within the library’s broader remit. Punk is only one aspect of a multi-faceted and eclectic group of self-published pamphlets and booklets. The library holds zines on radical politics, activism, veganism, football, race, mental health, gender and a range of other topics. This esoteric subject base is worth listing at length because it suggests the rich possibilities such a collection offers for researchers interested in engaging with social life outside of the mainstream. It also allows us to think about this kind of social life in its own terms, rather than on terms that have been refracted through the national press or a retrospective historical lens. 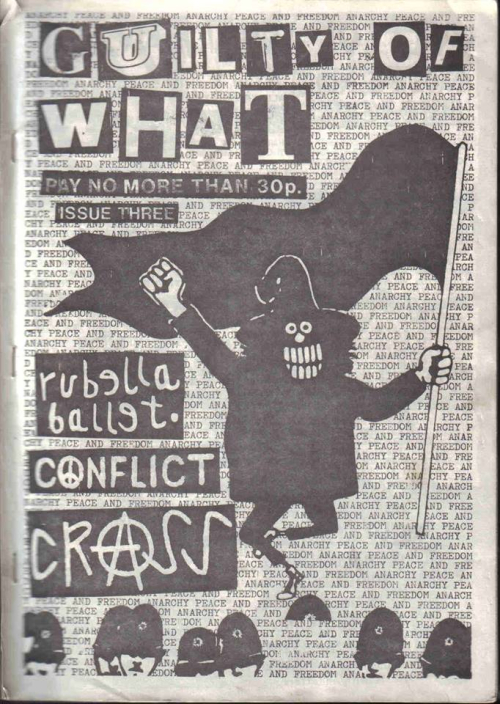 Fanzine created by and reproduced with kind permission of Chris Low

The sample of punk zines above could be read as skewing very white and very male (More On, the genesis of which is described here, is an interesting exception to the general rule). Given that one of the most exciting elements of the contemporary revitalisation of zine publishing is the platform it has provided for non-white and non-male voices, particularly in the form of perzines (or personal zines), it’s exciting that as the library’s collection develops it can seek out other voices from outside of the mainstream in the form of this new wave of zines.

But this raises a new set of problems to finish on. What’s the relationship between archiving these documents and incorporating them into a culture they are trying to critique? Classification is difficult, especially for zines that range across a number of different topics. How does a curator or a librarian balance the demands of accessibility with the need to respect and engage with the creators of zines and their wishes? Some zines, especially those that deal frankly with personal topics, may have been intended only for a select and sympathetic audience. A sensitive, radical approach is proposed in the Zine Librarians Code of Ethics, but the conversation about how libraries engage with this kind of material is one that will continue as long as zines continue to proliferate. For researchers as well as zinesters and librarians, this conversation should be a productive and interesting one.

Punk Rock So What? The Cultural Legacy of Punk, Roger Sabin (ed), Routledge, 1999

Posted by Joanna Norledge at 4:51 PM