As we reach the end of International Zine Month it seems a good moment to look back and take stock of the situation of zines and fanzines in the Library now. I’m impressed by the current vibrancy of the ‘zine scene’ and the level of interest in zines, both as a resource for social research and as a means of expression for people who are marginalised by mainstream publishing or who favour a DIY aesthetic as a means of retaining control over their work. I was asked recently whether, as a curator, I judged the scene to be growing. It’s hard to tell whether there are more people involved in producing zines or whether interest in, and awareness of, the scene is simply greater, but if the popularity of zine fairs is anything to go on, there does seem to be a real buzz within DIY publishing.  In London, this year’s ‘DIY Cultures’ was agreeably crowded and filled several floors of the Rich Mix building. Across London, at Goldsmiths University, London Radical Bookfair offered a wide range of zines alongside other publications. 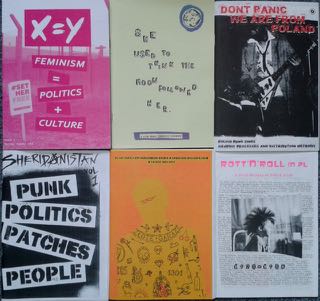 If there is indeed an increase in zine production, there are various reasons. One aspect may be a feeling of disconnect associated with online zines or personal websites.  Putting something together in print brings people together: you can take your zine out and talk to people, find somewhere to distribute it, and table it at zine fairs as part of a community. The print format offers a means to connect with other like-minded people in the real word, rather than virtually. At the same time it does seem that the web has helped the print zine scene by allowing people to raise the profile of zines, publicise fairs, and create online distros to bring zines to a wider audience. The web has given zinesters a means to connect with each other more effectively to exchange ideas and experiences, rather than taking away the need for zines to be produced in print.

Allied with this there seems to be a growing desire to produce something that will last.  Websites may have a wide reach, but they are also ephemeral, and may not endure.  Many of the zines we acquire now show more care in their production than some of the early zines - the paper is of higher quality and covers are stronger, bindings have replaced staples, and there is more use of colour. There is a sense that, having taken time to put them together, their creators want them to last. The care taken in the production of these zines is also a means for their creators to give recognition to the people who have contributed their stories or artwork or whose experiences are represented. 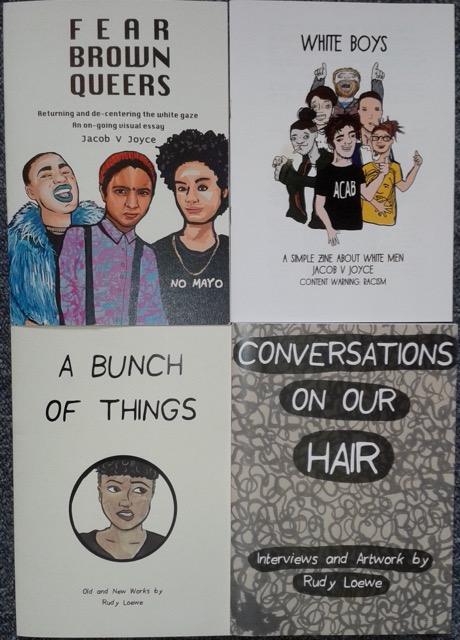 Another factor is the interest in zines within art schools, as well as media courses, given that zines offer students a way of taking their work to an audience.  In some senses this could be seen as a move away from the ‘not for gain’ ethos of many zinesters in the sense of zines being used as a means to further a career – but it also allows students and others to take charge of the way their work is presented and express themselves without being mediated to their audience by a third party. In many ways the early zines also served as a launch pad for their creators’ careers in journalism or the arts; this is apparent just as much amongst the more overtly rebellious punk zines as it is within the carefully crafted artistic works we are seeing now. For art students in particular, zines are a really good way to create an object that can showcase a style or approach in a self-contained way, and the community aspect of zine fairs allows for informal feedback that is both immediate and potentially supportive. 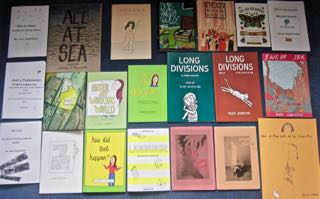 A selection of zines purchased at this year’s DIY Cultures, London.

There is continuity too, in that the opening up of wider expression and discussion around gender, sexuality and non-binary sexual identities has been a boost for zine production. Zines allow for expression around a very wide range of issues, and whilst at many levels the last decade has seen greater acceptance of diversity, including around LGBT+ identities, body image, and mental health, there are still strong barriers blocking the access of ideas and experiences to mainstream publishing outlets. 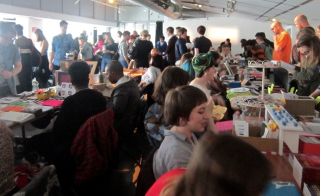 One of several rooms at DIY Cultures 2016 bringing together zinesters and those interested in their work.

Alongside the zines bought at zine fairs or from online distributors, the Library continues to gratefully receive zines sent in directly by their creators, whether they are single issues ‘hot off the press’ or longer runs carefully preserved from years gone by. Recenty, we were pleased to receive a full run of early 1990s Somerset rave zine, TAT (This and That) Mag from its author Terry Hanslip who describes the original aim of the zine as being ‘to inform, educate, protest and make people happy if I could’. 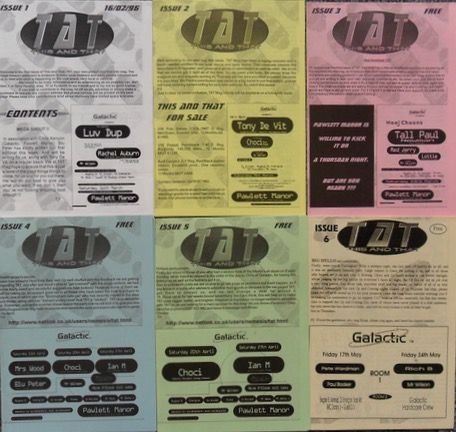 Not all aspects of print fanzine production are experiencing a boost as media moves online. The Library used to acquire a wide range of football fanzines, but very many of these have become online only, and a much-reduced number are produced in print.  Football fanzines in particular seem to have been affected by many of the same forces that work against print newspapers or magazines, partly because they are often professionally printed and need to be sold at a price that would cover rising production costs. This is hard to achieve when the same content can be made available for free online. Even so, many football fanzines are still going in print, especially those associated with the smaller clubs. A fuller exploration of the Library’s football fanzines is on my ‘to do’ list, so watch this space, but for now I’d like to mention the farewell print issue of Gary Firmager`s long running West Ham fanzine, Over Land and Sea that marked the club’s final match at the Boleyn Ground in May this year.   The Library holds a good run of OLAS from its first issue in August 1989, so it seemed important to add the last issue to the collection, to bring the series to a close. Steve Marsh’s ‘They Fly so High’ website sets OLAS in the context of the many West Ham fanzines over the years. Its 27-year run is truly exceptional, even amongst football zines. For more about zines in the Library, see Steve Cleary's post on More On and Fearghus Roulston's piece about punk zines as a resource for research.