"All that glitters is not gold" - Curator's Choice

The final co-curator of Shakespeare in Ten Acts, Greg Buzwell, Curator of Contemporary Literary Archives, tells us about his favourite item in the exhibition.

One of the comments frequently uttered during curatorial meetings for the Shakespeare in Ten Acts exhibition was ‘You can’t go wrong with Vivien Leigh’. Hundreds of potential exhibits were discussed, considered and discarded during the planning stage but whenever something relating to Vivien Leigh cropped up – a costume, a photograph or even an idea for a display panel – it would somehow always make the final cut. After all, Vivien Leigh was cinematic and theatrical royalty – winning awards for her performances in iconic screen roles such as Scarlett O’Hara in Gone with the Wind (1939) and Blanche duBois in A Streetcar Named Desire (1951) and achieving critical acclaim on the stage, not least for her appearances in Shakespeare – Ophelia, Cleopatra, Juliet and Lady Macbeth among them. Leigh achieved that rare combination of both critical and commercial success. Whatever the indefinable nature and mix of qualities that, taken together, combine to make someone a star she possessed in abundance. When it came to finalising the poster for the exhibition there were several choices but, unsurprisingly, the design featuring Vivien Leigh was the one that ultimately came to represent the show. After all, you can’t go wrong with Vivien Leigh. One of the sections in the Shakespeare in Ten Acts exhibition looks at performances of A Midsummer Night’s Dream in detail, focusing primarily on Peter Brook’s revolutionary production of the play at Stratford-upon-Avon in 1970 but containing a prelude in which the rich romantic history of Dream is explored. It is this section that contains my favourite item in the show, namely the headdress designed by Oliver Messel and worn by Vivien Leigh in the 1937 staging of the play at the Old Vic, the very headdress she is wearing in the photograph reproduced on the poster.

The director of this staging, Tyrone Guthrie, along with his designer, Oliver Messel, deliberately set out to recreate the romance and visual spectacle of the great Victorian productions of the play, productions that had been swathed in opulence and excess. Guthrie and Messel strived to ‘make a union between the words of Shakespeare, the music of Mendelssohn, and the architecture of the Old Vic’. Indeed Guthrie felt that the well-known music written for the play by Felix Mendelssohn was ‘redolent of crimson and gold opera houses, of operatic fairies in white muslin flying through groves of emerald canvas’. Messel’s designs, of which the headdress is a fine example, perfectly echoed Guthrie’s vision. 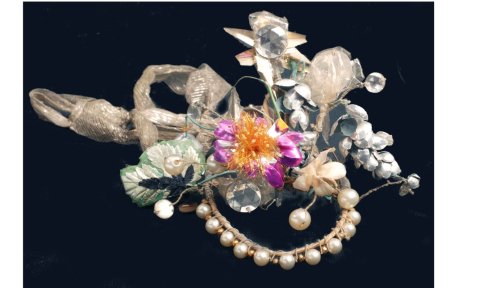 Above: Fit for a Fairy Queen, The dazzling headdress, currently on loan to the British Library from the V&A, made by Oliver Messel and worn by Vivien Leigh in her performance as Titania. 1937. © Victoria & Albert Museum

Messel understood that theatre is an art form which thrives on heightened realism. It doesn’t especially matter, in terms of design, what a fairy crown is made of so long as, under the lights and in performance, it looks sufficiently dazzling for the audience to believe it is what it claims to be. The headdress Messel designed for Leigh has a wire base concealed by brown paper tape painted silver. Pink flowers, again made from paper, are tied by thread to the wire base along with black, gold, green and silver leaves, made from a mixture of metallic paper, painted paper and gauze. Gold-coloured beads, rhinestones and imitation pearls are also used, along with strips of silver ribbon. Parts of the headdress are even covered in clear sellotape. The materials could hardly be more prosaic, and yet the headdress is a sublime example of the set-designer’s art. Under lights, on the stage, during the magical spell cast by a theatre performance (and, yes, worn by someone like Vivien Leigh) this fragile collection of everyday materials appeared entirely appropriate, and suitably magical to adorn a fairy queen.

The 1937 production at the Old Vic, which also starred Robert Helpmann as Oberon, Ralph Richardson as Bottom and Anthony Quayle as Demetrius brilliantly realised its intentions. As the critic Herbert Farjeon observed upon witnessing the final scene of the play ‘You can almost see our young Queen [Victoria] leaning forward in one of the boxes’, such was its success at recreating 19th-century theatrical spectacle although, in fact, it was actually the young Princess Elizabeth who was in the audience on one occasion, brought along by the Queen Mother to witness her first Shakespearean production. Genuine royalty in the audience undoubtedly, but the real romance and magic was taking place on the stage.

Shakespeare in Ten Acts runs until the 6th September 2016.

Posted by Joanna Norledge at 10:54 AM