From Shakespeare to rock music: the history of the word ‘punk’

In light of the Library’s summer exhibition programme we thought we’d take a look at the links between punk and Shakespeare by exploring the evolution of the word since Elizabethan times. If this whets your appetite for Shakespearean verse then you can catch our Shakespeare in Ten Acts exhibition until 6 September. Punk 1976-78 is a free exhibition in our Entrance Hall running until 2 October.

Shakespeare was an early user of the word 'punk', which originally meant ‘female prostitute’. According to the Oxford English Dictionary the first recorded usage of the word is in a ballad called ‘Simon The Old Kinge’ composed some time before 1575. It warns men that drinking is a sin akin to keeping prostitutes: ‘Soe fellowes, if you be drunke, of ffrailtye itt is a sinne, as itt is to keepe a puncke’.

Not too long after that, Shakespeare used the word in Measure for Measure (written around 1603-04) where Lucio tries to explain Mariana’s cryptic denial that she is ‘neither maid, widow, nor wife’ by declaring ‘She may be a Puncke’ (5.1.178). It’s not surprising that the word crops up in this play given its preoccupation with sexual morality and its setting in a debauched Vienna where whoring is big business.

Over time the word has taken on different meanings. In the late 17th century the word began to be used to describe a boy or young man being kept by an older man for sex. A 1698 manuscript in the Bodleian Library contains the lyrics to a bawdy song, 'Women’s Complaint to Venus', containing the alarming line ‘The Beaus ... at night make a punk of him that's first drunk’.

Punk has subsequently been used as a derogatory insult of various kinds, from US prison slang for men being used for sex to a term for the young male companions of tramps, and then as general description of contemptible or worthless people, petty criminals, cowards, weaklings, amateurs, apprentices and inexperienced youths in general.

The popular use of the word to describe a type of rock music dates from 1971, when US rock journalist Dave Marsh used it to describe - retrospectively - 1960s garage band ? and the Mysterians. Stylistically similar groups would include the Seeds and the Standells.

Less well-known is the use of the term 'Punk Music' to advertise early shows by the New York minimalist electronics-and-vocals duo Suicide. This was slightly earlier, in late 1970. 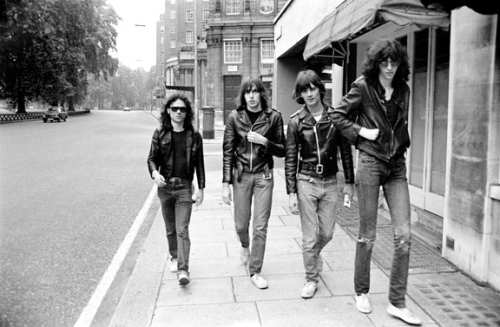 Punk style: The Ramones in London, 1976. Photo © Danny Fields. My Ramones by Danny Fields is published by First Third Books.

Later in the decade punk became the catch-all term for the type of music pioneered by the Ramones in New York and the Sex Pistols in London. The Ramones debut album contained a song '53rd & 3rd' told from the point-of-view of a male prostitute, and another titled 'Judy is a Punk', but it was probably Punk magazine, first published in January 1976 in New York, that had most to do with reviving the word.

John Holmstrom, Ged Dunn and Legs McNeil created the magazine to cover the local music scene that centred around the club CBGB. Please Kill Me: The Uncensored Oral History of Punk by Legs McNeil and Gillian McCain tells the whole story, and the British Library holds a complete run of the original journals.

In the UK, the term was not favoured by the leading lights of the new movement, and it took a while to stick. For example, in October 1976 a major article by Jonh Ingham in the music weekly Sounds was titled 'Welcome to the (?) Rock Special', suggesting that at that point nobody quite knew what to call it.

A month later however, the Sex Pistols swore on live TV. The next day, the word 'punk' was all over the newspapers, and - for better or worse - was here to stay.

Posted by Joanna Norledge at 1:52 PM