For the last month of the Shakespeare in Ten Acts exhibition run, the other curators and I will be telling you a bit about some of our favourite exhibits.

One of my absolute favourites is a little book called Kemp’s Nine Days Wonder, published in 1600 and surviving in only a single copy (owned by the Bodleian Library at the University of Oxford, and kindly on loan to us from there).

The book was written by Will Kemp, an actor who had been the clown (or comedian) in Shakespeare’s company the Lord Chamberlain’s Men. He was famous for roles such as Falstaff in Henry IV Part 1, Dogberry in Much Ado about Nothing, and Peter in Romeo and Juliet. In 1599 there was some kind of disagreement within the Lord Chamberlain’s Men and Will Kemp resigned his shares in the company and left. In an unusual next move, he went on to perform a Morris dance from London to Norwich over the course of nine days, as a sort of publicity stunt and a way of raising money by betting on himself. Although it may seem to us a little odd, the Nine Days Wonder was fitting – Kemp was very famous for performing jigs, physical comedy afterpieces incorporating dance, which were performed after plays. Several dramatists of the period had complained that these ruined the mood at the end of a tragic play, and it’s been conjectured that this might have been an artistic difference between Kemp and the rest of Shakespeare’s company, which could have caused him to split from them. 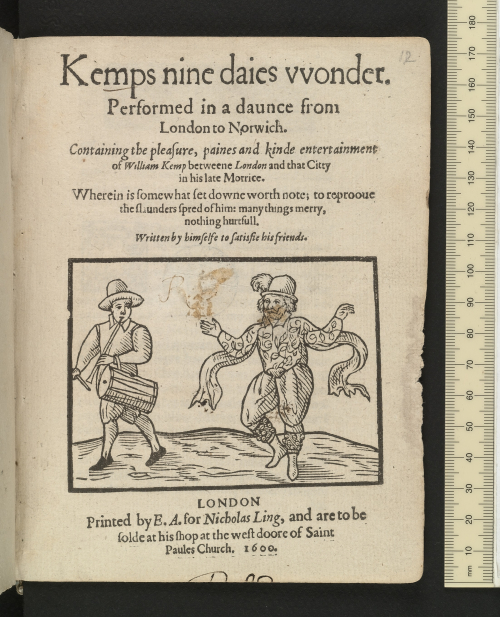 In this pamphlet, Kemp describes the 110-mile journey, including the towns he visited, the people he met, and the various daring deeds he executed – such as jumping over a churchyard wall in Norwich, a leap so outstandingly high that to commemorate it, the shoes he’d been wearing were nailed to the wall of the Guildhall. With him were his tabor-player Thomas Slye, his servant William Bee and a man called George Sprat, who was there purely as an overseer of the task, to be sure Kemp didn’t cheat.

My favourite part of the account is Kemp’s description of what happens in the town of Sudbury. A strong, tall butcher offers to keep him company by dancing alongside him as far as Bury. Kemp accepts, but before they’ve travelled half a mile, the butcher gives up, protesting that he couldn’t keep pace with Kemp even for £100. As the butcher leaves, a ‘lusty country lass’ shouts that he’s a ‘faint hearted lout’ and says she could keep going for a mile even if it costs her her life. The crowd laugh at her, but she replies that if Kemp will lend her some bells, she’ll dance for a mile. Kemp writes,

I looked upon her, saw mirth in her eyes, heard boldness in her words, and beheld her ready to tuck up her russet petticoat, I fitted her with bells, which [s]he merrily taking, garnished her thick short legs, and with a smooth brow bid the taborer begin.

She does indeed keep pace with Kemp for a mile. Afterwards he gives her a crown piece to buy a drink, and calls her ‘my merry Maid Marian’. As a morris dancer myself (I’m a member of Cuckoo’s Nest Morris) I feel a great kinship with this unnamed woman – I hope she enjoyed her post-dance beer.

You can see Kemp’s Nine Days Wonder in Shakespeare in Ten Acts until 6 September.

Posted by Joanna Norledge at 10:02 AM