I first encountered Nahum Tate’s adaptation of King Lear when studying the play for A level. The revelation that Tate had altered the text to provide a happy ending provoked laughter from the class; Tate was set aside with Bowdler as ridiculous and inconsequential. I never looked at Tate again until his version of King Lear appeared in Shakespeare in Ten Acts; and its inclusion in the schools’ workshops gives an opportunity to revisit the play itself, and to consider it from Tate’s viewpoint. 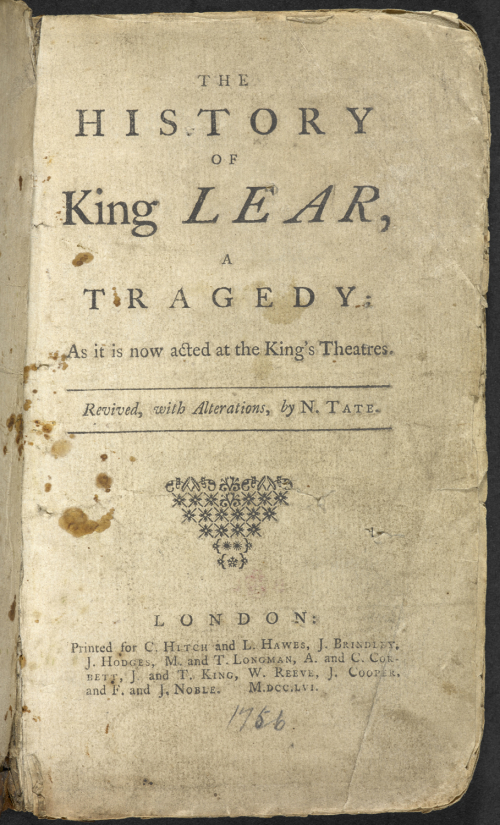 Title page from David Garrick’s prompt book for his 1756 production of Lear.

Tate’s version removes the Fool completely, has Cordelia and Edgar fall in love, and has Lear retire, alive and recovered in his mind, at the end of Act V. Some of the resulting text is not brilliant:

My dear Cordelia, Lucky was the Minute

W' are past the Fire, and now must shine to Ages.

But there is pathos in the story. Lear gracefully cedes power to Cordelia after a moment’s thought that he might retain his throne:

Old Lear shall be

And there is a touching line where he recognizes that Regan and Goneril were indeed his daughters:

Ingratefull as they were, my Heart feels yet

A Pang of Nature for their wretched Fall;

with Tate nicely picking up the nature/unnatural trope. Partly Tate’s version was a restoration of an earlier form of the story, itself relating to Holinshed’s version, in which Cordelia and her husband, the Prince of Gallia, successfully restore Leir to the throne, which he retains for two years, being succeeded by Cordelia.

By the time we come to present this in workshops, we have looked at a case of translations of Shakespeare’s plays into several languages, adaptations of Shakespeare into musicals, puppet plays and ballet, as well as the range of changes both allowed and demanded by the nature of drama in four centuries of changing sensibilities, including negotiated changes of gender, disability and skin-colour. While changing the ‘story’ seems to be the most challenging alteration, we tend to forget that Shakespeare was a changer of stories (the first time his name appears in print on a playscript it is as someone who has ‘corrected and augmented’ the text); Tate’s alteration brings Shakespeare back into a context of continual adaptation.

We should therefore present Tate’s version as something more than an oddity; it was the standard performing version for decades, with Shakespeare’s text being only gradually reintroduced from 1756 - the role of the Fool was brought back only in 1838. Lucy Munro in her essay on the restoration of King Lear in Shakespeare in Ten Acts states that Restoration audiences ‘had begun to demand greater plausibility, sentiment and decorum in tragedy, and Shakespeare’s plays were regularly adapted to suit their tastes’. By 1660 the theatres had been closed for 18 years, effectively removing a generation of playgoing. The tragedies of the new playwrights, Dryden and Boyle particularly, with rhyming couplets and strong sentiments of nobility and heroism, were at odds with Shakespeare’s coincidences of plot and down-to-earth references; noble sentiments demanded noble acts. Pepys, after seeing Romeo and Juliet in 1662, described it as ‘a play of itself the worst that ever I heard in my life’; he also had mixed feelings about the Dryden/Davenant adaptation of The Tempest, which he saw in 1667. If Shakespeare was to survive it needed to be brought into the modern era; the First Quarto of Macbeth was published in 1673, followed a year later by the Second Quarto, with ‘Alterations, Amendments, Additions and New Songs, as it’s now acted at the Dukes Theatre’. 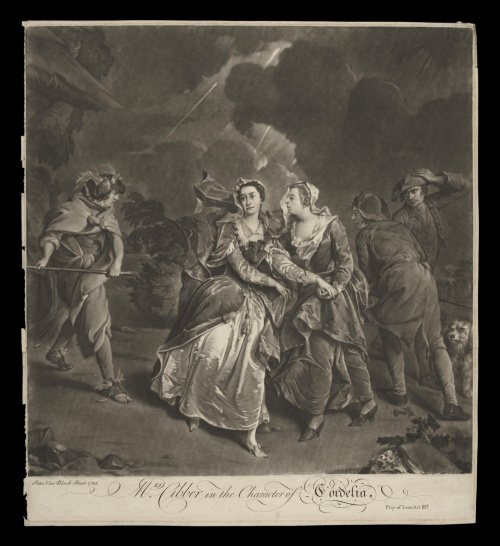 John Dryden (1631-1700) argued that Shakespeare’s work was remarkable, but lacked polish, that his work was great despite ignoring the rules of art. For the Restoration court, returning in 1660 after being exposed in exile to French and Italian operas and dramas and Spanish comedies, nature was not enough; though Dryden in his Essay of Dramatic Poesy said of Shakespeare that he ‘needed not the Spectacle of Books to read Nature; he look'd inwards and found her there’[1], the new sophisticated audiences demanded control, art and artifice. Dryden made versions of Shakespeare’s, Antony and Cleopatra (All For Love, 1677), and Troilus and Cressida, or Truth Found Too Late (1679), in the preface to which Dryden ‘undertook to remove that heap of Rubbish, under which many excellent thoughts lay wholly bury’d’. In these he was adapting Shakespeare’s plays to the new ideas of drama proposed by French critics.

Tate himself was a prolific writer, author of two noted tragedies, and a number of comedies. He was made Poet Laureate in 1692, and he should be generously remembered as the librettist of Purcell’s Dido and Aeneas, with the famous line ‘Remember me, but Ah forget my fate’. Despite the ridicule usually directed at the adaptation of Lear, David Hopkins, writing in the Dictionary of National Biography, offers another view: ‘his version of King Lear is arguably an intelligent response to features of Shakespeare's original which distinguished critics such as Dr Johnson have found equally perplexing and problematic’.

Offering a truthful summary of the themes of King Lear to school students is challenging; a moment’s consideration reveals that we are dealing with madness, the dismembering of the state, old age as total failure, bullying, fatal sibling rivalry (twice), exile, despair, disinheritance, gratuitous torture, civil war, a failed attempt at suicide, and a model of survival that depends on acting mad. Shakespeare offers us a story without redemption, a devastating story, about the breaking of society, the state, individuals. As in all spectacle, we the audience are complicit, by our presence we allow it to happen. King Lear, like all great tragedy, asks us – can you bear this? But the totality of its devastation, like Oedipus, takes us to the point where a negative answer is comprehensible, and where Tate offered a sympathetic alternative to the audiences of his time.

Julian Walker leads workshops for the schools programme for the Learning Department at the British Library. His latest book The Roar of the Crowd, an anthology of sporting literature, is published by the British Library. He has recently curated Shakespeare in Redbridge, at Valentines Mansion, Ilford.

Posted by Joanna Norledge at 4:09 PM