Poetry which attains popularity or critical acclaim often does so because it is perceived as beautiful or as something that makes some kind of meaningful impact on the senses, whether it be read privately or aloud. But what about poetry that actually looks beautiful or striking?

Historically, pattern poems or shape poems have generally struggled to be taken seriously as a literary form. To modern minds and senses this can perhaps be hard to understand – concrete poetry in art books for the coffee table, for example, are very collectible. There is also often an additional reverence for texts and illustrations contained in antiquarian works, especially when looking at Renaissance or early modern efforts in books from the hand-pressed print period.

The English poet, Thomas Watson (1555/6-1592), is the pioneer of English play with pattern poems. His Sonnet LXXXI, ‘A Pasquine Piller erected in the despite of Love’, published in Hekatompathia, or Passionate Century of Love, 1582, is probably the earliest printed pattern poem in English: 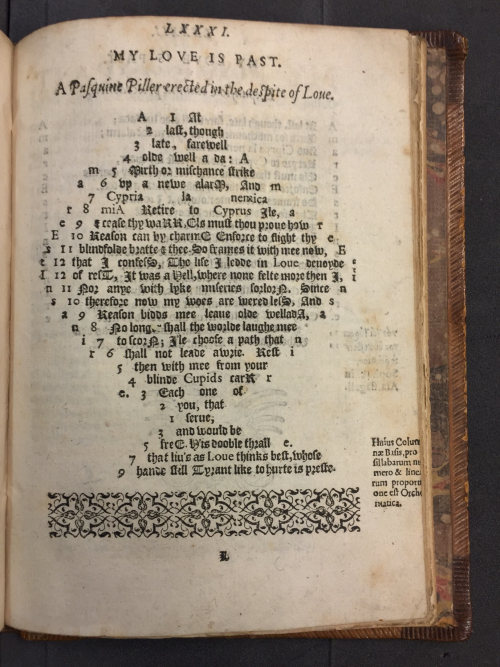 Thomas Watson’s ‘A Pasquine Piller erected in the despite of Love’, 1582, British Library C.14.a.1

We can wonder at the faces pulled by readers paging through a copy of Watson’s work upon seeing this.

The form of the pattern is that of a lozenge on a stem, it is a shape well founded in the pattern poems from the classical traditions of Greek and Latin literature. Typical Hellenic patterns which filtered down into English representations are axes, altars, eggs, wings syrinxes and these lozenges; all of which are now thought of as being quite ‘conservative’ or unadventurous. Whilst these and more extravagant shaped pattern poems were keenly revived on the continent, the enthusiasm was not matched in British literature. But Watson was well placed to exercise the continental fashion for pattern poems, he had spent time travelling in France and Italy, composing all his work in Latin; this collection of one hundred (“a century” of) songs was his first work in English. Watson was anxious about offering verse in English and his opening piece in Hekatompathia, “to the Friendly Reader” asks them to go easy on his poems. If Watson was worried about his use of the English idiom, he didn’t seem so concerned about using the form of pattern poetry which he had been exposed to as a vogue from his time on the continent.

Whilst A pasquine piller …, is without doubt beautiful and striking to look at in the first instance, it is also something much more than a pretty looking poem. It is also a puzzle, a ‘trick’ that draws on playful arithmetic. It cleverly produces an acrostic motto or ‘posy’, “amare est insanire”. Watson must have been mindful about the possible reception of the foreign and cosmopolitan influences of the verse in Hekatompathia, each poem is annotated with a short introduction. Written in the third person they introduce named poets, themes or styles to the English audience. They can be seen as attempts to popularise his erudite and novel material. The introduction to Sonnet LXXXI, says, “all such as are of indifferent capacitie, and have some skille in Arithmetike, by viewing this Sonnet following compiled by rule and number into the forme of a piller, may soon judge how much art and study the Author has bestowed in the same.” It explains the “antitheticall or Antisillabicall” structure and explains that the pillar is “Orchematicall”, meaning that it is founded by the skipping of number by rule and order.

If this sounds complicated, Watson was kind enough to provide an acrostic for the next Sonnet which goes some way to further illustrating his art and study: 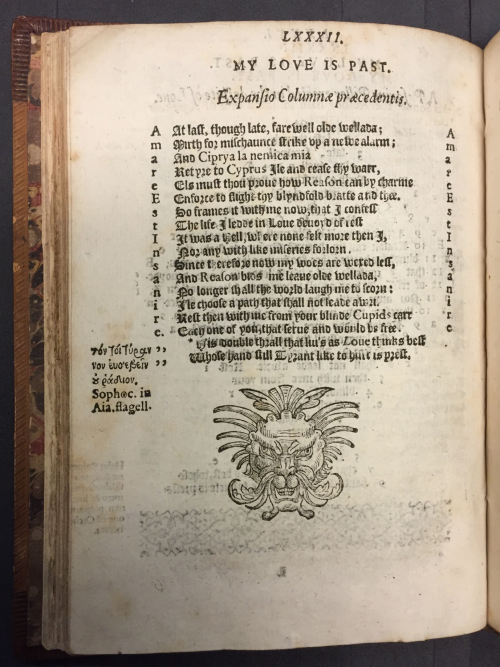 If this still looks complicated, you can follow the guide to make sense of the trick using a later printed facsimile on pp 116-118 of Poems. Viz.:-The Ἐκατομπαθια or Passionate Centurie of Love. 1582, edited by Edward Arber (1870), which is freely available online in digital facsimile, courtesy of the partnership between the British Library and Google Books https://goo.gl/rmj6xF

So what of its success? Astonishingly, Hekatompathia appeared in one edition only prior to Arber’s series of English Reprints in mid Victorian times. It may require some understanding why critical opinion, the Popes, the Addisons and the Butlers denigrated pattern poems as idle fancies. But, this opinion amongst British Literature seems to have persisted as the critic and poet Francis Turner Palgrave, writing about Watson and his Pasquine Pillar in 1872, says that the ingenuities, the tricks and conceits (in the literary sense), “happily, recur nowhere else in the Hecatompathia.”.

Still, killjoys aside, some contemporaries were evidently impressed, just several decades following Watson’s sole edition containing this wonderful visual text, someone cared to transcribe some of his work by hand: 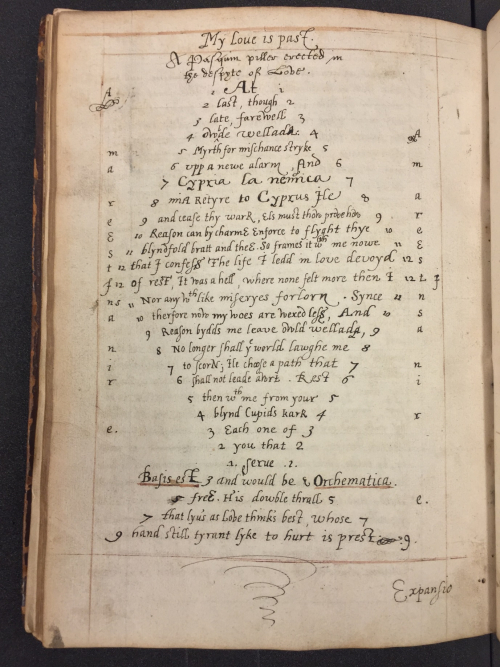 It is rewarding for us to compare the print and the script – one a typographical feat, the other no less impressively executed by hand. Visual texts have an immense aesthetic, but there is often more art and work going on than simply imposing a model on some verse. The poet is still capable of reflecting and conveying ‘profound’ or meaningful thoughts. Though so often dismissed, it should be worth looking at more representations of visual verse or texts in early printed works …

Posted by Joanna Norledge at 10:04:00 in Manuscripts , Poetry

Posted by Joanna Norledge at 10:04 AM