William Shakespeare and The Learned Pig

There have been many learned pigs in history but only one, to the best of my knowledge, that has claimed credit for writing the plays of William Shakespeare. Indeed by 1786, when The Story of the Learned Pig, by an officer of the Royal Navy was published, complete with its claim regarding the authorship of A Midsummer Night’s Dream and certain other plays knowledgeable animals of one kind or another were in danger of becoming somewhat passé. ‘Marocco the thinking horse’, for example, had made his appearance in the late 16th century and was able to follow the commands of his owner William Bankes with uncanny ability. Marocco could play dead, walk on his hind legs, urinate on command and even, apparently, separate and indicate the innocent maids in the audience from the disreputable harlots. Clever, certainly, but not as clever as writing The Tempest.

The first performing pig didn’t arrive on the scene for almost another 100 years later. Trained by a Scotsman, Samuel Bisset, the original learned pig used cards printed with individual letters and numbers to answer questions - indicating particular cards with its snout to respond to enquiries about the number of people in the audience, the time of day and even on occasions enquiries about what certain ladies in the audience were thinking at any given time. The show was a great success, and after Bisset’s death the pig went into new management with a Mr Nicholson who exhibited the pig in Nottingham in 1784 and then in London in 1785. Tours of provincial towns and a trip to Europe swiftly followed. The interest aroused by this trail-blazing learned pig caused considerable debate regarding how the pig had been trained and the extent of its cognitive abilities. Was the pig really answering questions, or was it simply responding to certain sounds or movements made by its owner in order to give pre-determined answers? Whatever the truth of the performance the idea of pigs as intelligent creatures took hold in the popular imagination. One only has to think of the pigs Snowball and Napoleon being the driving intellectual forces in George Orwell’s Animal Farm (1945) for a modern literary example. 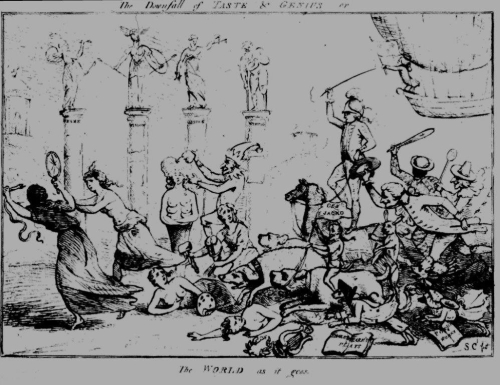 (Above: The Downfall of Taste and Genius, or, The World as it Goes by Samuel Collings – a satirical print from 1784 lampooning the public’s taste for performing animals. Here a learned pig leads the charge against the arts with a copy of Shakespeare’s plays lying abandoned in the assault)

Further learned pigs soon followed, including William Frederick Pinchbeck’s ‘Pig of Knowledge’, which was displayed in America in 1798 and even met President John Adams. Curiously Pinchbeck’s pig inspired considerable discussion, some of which took a fairly dark tone with many believing Pinchbeck had used witchcraft to control the animal while others claimed the pig’s ability to answer questions was evidence of reincarnation – the pig being inhabited by a soul that must once have animated a human being. Later, in the early 19th century, ‘Toby the Sapient Pig’ was exhibited in London by the illusionist Nicholas Hoare. Indeed such was the interest in Toby that in around 1817 he even published his autobiography – The life and adventures of Toby, the sapient pig: with his opinions on men and manners. Written by himself – although interestingly this was not the first time a learned pig had seen his memoirs appear in print, something which takes us back to 1786, The Story of the Learned Pig, by an officer of the Royal Navy and, perhaps even more strangely (if that’s possible) to William Shakespeare. 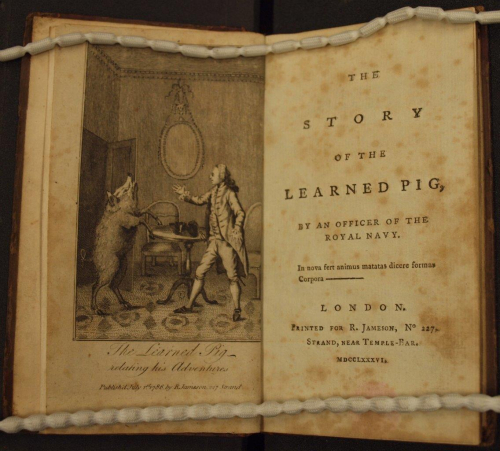 (Above: The Story of the Learned Pig by an Officer of the Royal Navy. London, 1786.)

In the Shakespeare in Ten Acts exhibition The Story of the Learned Pig is displayed in a section exploring 'bardolatry' – the word used to describe the often uncritical fascination that accompanies all things Shakespearean, and how sometimes that fascination takes a turn towards the bizarre. In The Story of the Learned Pig a soul describes how he has successively migrated through various humans and animals before finally ending up in the body of a pig. Earlier incarnations had included Romulus, one of the mythical founders of Rome and Brutus, the murderer of Julius Caesar.  At one point the soul was reincarnated as a man called ‘Pimping Billy’, who worked as a horse-holder at a playhouse (where Shakespeare was regularly in attendance) and was the real author of the plays – the Immortal Bard having simply stolen Pimping Billy’s ideas and words. Finally the soul moves into the body of a pig, who then presents his personal reminiscences to the author. As the pig remarks Shakespeare ‘has been fathered with many spurious dramatic pieces: Hamlet, Othello, As You Like It, The Tempest and A Midsummer Night’s Dream’ of ‘which I confess myself to be the author’.