Banned from the classroom: Censorship and The Catcher in the Rye

J.D. Salinger’s The Catcher in the Rye is an American classic. It is also one of the most censored books in American literature. One of the earliest works of fiction exploring male teenage consciousness, The Catcher in the Rye is narrated in the first person by Holden Caulfield, who struggles with feelings of alienation and anxiety. The novel has been the subject of controversy almost since its publication by Little, Brown and Co in 1951, and the debate around the book is still very much alive today. Salinger’s novel was listed in the top ten most frequently banned books in schools and school libraries in 2001, 2005 and 2009, according to the yearly list provided by the American Library Association. 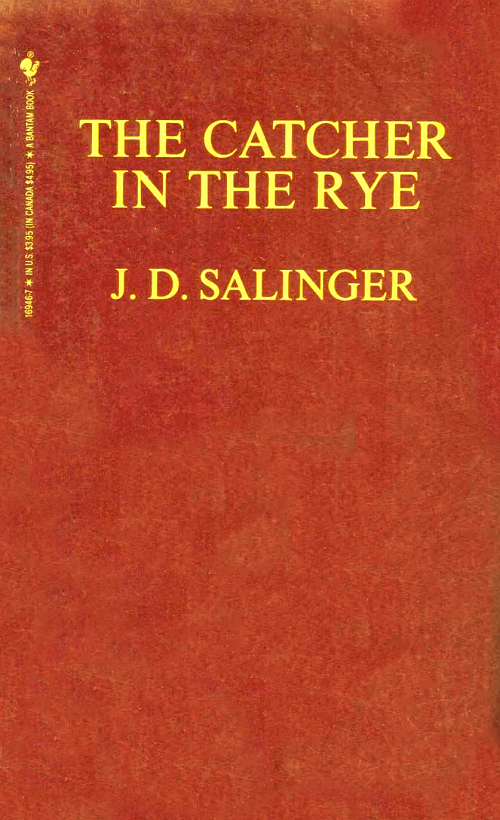 The Catcher in the Rye cover from the 1985 Bantam edition

But what makes the The Catcher in Rye such an offensive book?

The use of Salinger’s novel as a set text in schools has been challenged by people who object to its use of swearwords and its sexual content. The work contains several disturbing scenes, including instances of abuse, and is written using 1950s teenage slang. The first curse word appears in the opening of the novel when Holden warns the reader not to expect an account of his unhappy childhood, or as he puts it, ‘that David Copperfield kind of crap’. But there are many more –according to associations who have protested against the novel the word ‘goddam’ appears more than 200 times. As these groups often point out, the novel was originally written with an adult audience in mind. The debate sparked by the novel, the question whether teenagers should be protected from ‘foul’ language and sexual content, curiously mirrors Holden’s own obsession with preserving childhood innocence, becoming the ‘catcher in the rye’, ‘catching’ children from falling off a cliff (and into the adult world).

While a number of American schools and parents’ associations may consider the language in the novel objectionable, many teachers see The Catcher in the Rye as a work which resonates with their students in a way that few classic novels can. The book is therefore in the unlikely position of being required reading in some schools, and a banned book in others.

Does the censoring of the novel contribute to its enduring allure for young readers? Most of us remember the first time we read a book meant for adults; the first time we saw forbidden words in print. Since The Catcher in the Rye remains a bestselling book in America 65 years after it was first published it is in any case unlikely that censors will get in the way of people’s enjoyment of the novel.

This blog is part of series for Banned Books Week 2016. See also Melvin Burgess’s blog on Censorship and the author, curator Christian Algar on the  ‘corrected’ Il Decamerone, curator Tanya Kirk on The Monk, the Bible and Obscenity and The Book Banner who inspired Banned Books by curator Alison Hudson.