Angela Carter and the Visual Imagination

I was too young to see The Company of Wolves when it first came out in 1984. Consequently, until the film appeared on video, I had to make do with reading the reviews in newspapers and admiring the stills reproduced in film magazines. The stills were remarkable, full of fairy-tale imagery run riot. One shot showed a banqueting scene in which ornately dressed guests had developed lupine faces; another showed a cluster of eggs lying in a nest, one of which had cracked from top to bottom to reveal a baby. Perhaps most memorably of all one still depicted a wolf’s snout, all sleek and furred, emerging from a man’s mouth - the beast within made manifest. Inspired by the lush Gothic imagery of the film (I’ve always believed that if Gothic is worth doing it’s worth over doing, it’s a genre that thrives on excess – I’m all for velvet drapes, icy-mists and all round spectacular flamboyance when it comes to Gothic) I sought out The Bloody Chamber, the volume containing the short story that provided the inspiration for the film. And so I discovered the world of Angela Carter – 'Feminist', 'Magic Realist', 'Gothic author', 're-worker of fairy tales' and generally someone to whom a seemingly endless stream of labels have been applied over the years, all of which tell part of the story but none of which do the breadth of her work and her imagination justice. 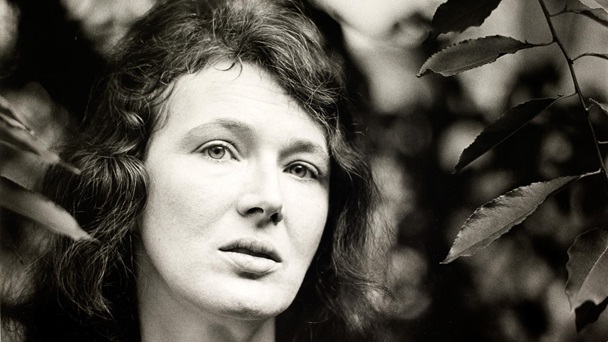 Perhaps as a result of this early exposure to Neil Jordan’s film adaptation Angela Carter’s work has always, to my mind, possessed something of a cinematic quality. Jean Luc Goddard and Frederico Felline were clearly influences but I often like to imagine that there is possibly a dash of Hammer Horror lurking in the shadows behind some of her stories. In her final novel, Wise Children, Carter had explored the way in which high art and low, Shakespeare and music hall for example, often become entwined. Given such an outlook surely it’s possible to speculate that films like The Curse of the Werewolf, The Brides of Dracula and The Kiss of the Vampire might have played a part in the genesis of stories such as ‘The Bloody Chamber’ and ‘The Lady of the House of Love’. I like to think so, no matter how fanciful such a notion may be on my part. Still, true or not, I’ve always been pleased that I came to Carter’s work via film. 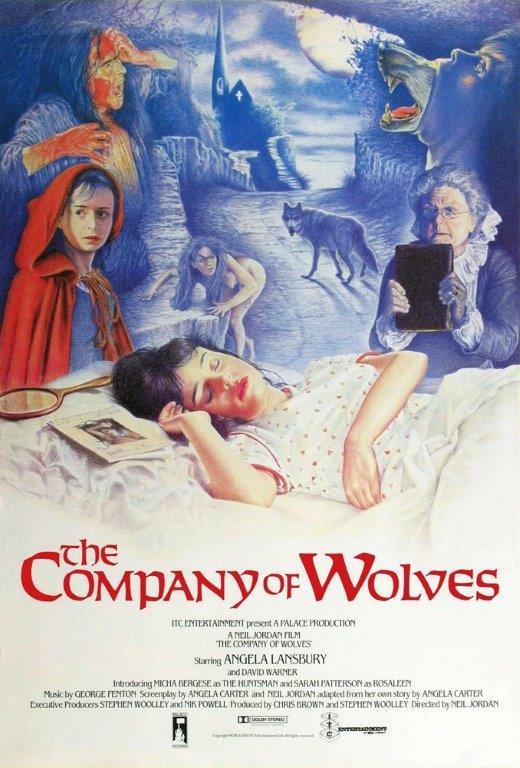 ‘Dying’, as Gore Vidal once gloomily remarked, is often ‘a good career move’ and in the year following Carter's death in 1992 the British Academy received over forty proposals for doctoral research into her work. Sadly, in art as in life a person’s influence and worth often only really become apparent once they have gone. Angela Carter’s tragically early death propelled her work into the limelight. Almost twenty five years later, and with Edmund Gordon’s eagerly awaited The Invention of Angela Carter: A Biography now in the bookshops, the fascination and admiration surrounding her work continues to grow from strength to strength. In a sense Carter’s work achieves that rare but perfect balance – simultaneously adored by academia for its insight, depth and invention but maintaining popular appeal due to its fabulous characters, storylines and sheer exuberance.

The British Library holds Angela Carter’s archive, a resource that consists of a wealth of manuscript material including diaries, notebooks, letters, drafts of novels, outlines for short stories and research notes. Each part of the archive offers a fascinating glimpse into Carter’s life and work but, for those with a love of her fiction, perhaps the most revealing items are the notebooks in which she recorded her research and worked on ideas that later became fully developed episodes in her books. 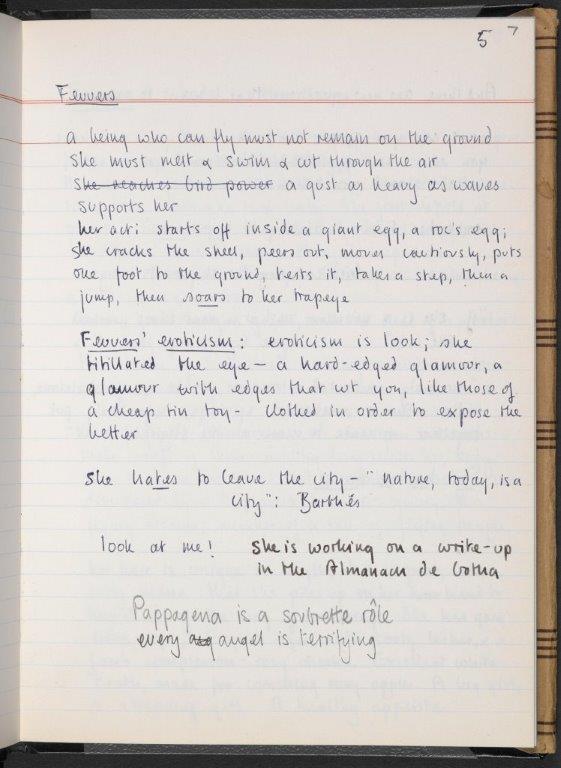 Shown above, by way of example, is a page from one of her notebooks in which she outlines her initial thoughts about the character of Sophie Fevvers from the novel Nights at the Circus (1984). It is fascinating to see the character in embryo, and to be able to explore how layer upon layer of idea, imagination and imagery is built up until Fevvers, a six-foot-two trapeze artist with wings, emerges complete in the published book. The genesis from notebook to novel took many drafts and, as can be seen below in this page of an early draft of the opening chapter the re-workings of the text continually grow and evolve rather than emerge fully formed. (Add. MS 88899/1/12. Early draft of the opening scenes from Nights at the Circus. © Displayed with the permission of the Estate of Angela Carter).

Carter’s notebooks are a continual delight, and looking through their pages offers a unique insight into the creative process. In a way it is the literary equivalent of siting in a studio with an artist as they work on a painting, seeing the successive sketches and layers of paint as they are applied until the finished portrait appears. You don’t often get the chance in life to see creative genius in action, but Carter’s archive does give us one such opportunity to see exactly that.

Much more about Angela Carter’s archive and work can be found on the Discovering Literature: 20th Century website, with examples from her notebooks relating to Nights at the Circus being available, together with examples of the early drafts of the novel . The British Library, in partnership with the Royal Society of Literature, will also be hosting an event - Angela Carter: A Celebration - on November 24th 2016. Nearly 25 years after her death Angela Carter is more relevant than ever.