by Helen Peden, Curator, Printed Heritage Collections 1601-1900 and British Library curator of exhibition Victorian Entertainments: There Will Be Fun.

When Dan Leno performed as the Pantomime Dame in the 1880s he transformed a previously minor role into the main part and shaped pantomime into the Christmas show we know today. 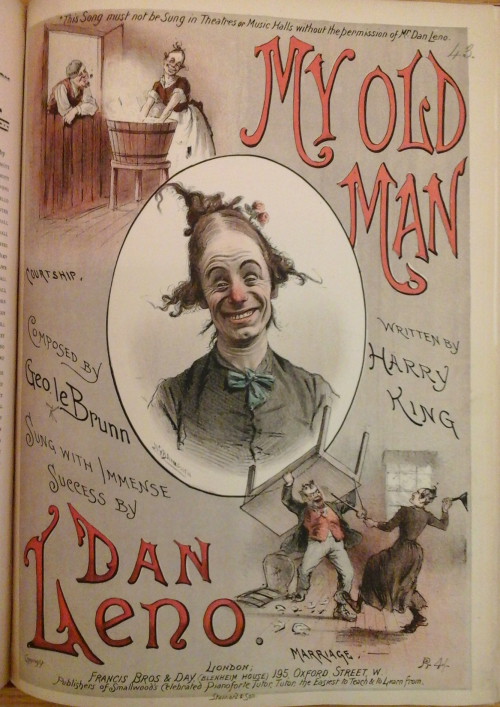 The great clown Joseph Grimaldi (1778-1837) had been the star of Regency pantomime and brought the subtle arts of mime and gesture to this popular entertainment. In Grimaldi’s performances the clown was always the main character but after his death these clever skills were lost and soon replaced by the much less finely drawn charms of Principal Boys and Pantomime Dames. Clowns no longer played a pivotal role in the production and returned to the circus leaving pantomime without a main character and in need of a new direction. This was provided through the comic genius of Dan Leno.

On Monday, October 5th, 1885, Leno made his first appearance in London at the Foresters’ Music Hall. Playbills in the Evanion Collection document Leno’s early London success (Evan.611, Evan.1063) and list him as a champion dancer – he had won a world clog dancing competition in Leeds in 1880. His champion clog dance was the main part of his turn at the Foresters’ but his comic song – I’m Going to buy Milk for the Twins – proved more popular with London audiences. Although the words have not survived, we know that Leno rushed on stage in the guise of an ordinary, harassed, yet spirited and resilient woman, and immediately grabbed the attention of the audience with his rapid comic patter in which he revealed the many small injustices of everyday life. Although Leno performed alone on stage the characters he embodied were so well drawn that his stage always seemed to be fully peopled.

George Conquest, manager of the Surrey Theatre in Lambeth, South London was so impressed by Leno’s performances that he was quickly engaged to play Dame Durden in the 1886-7 pantomime Jack and the Beanstalk. Leno’s Dame stole the show and he subsequently appeared in every spectacular pantomime at the Theatre Royal Drury Lane until the end of the 1904 season. 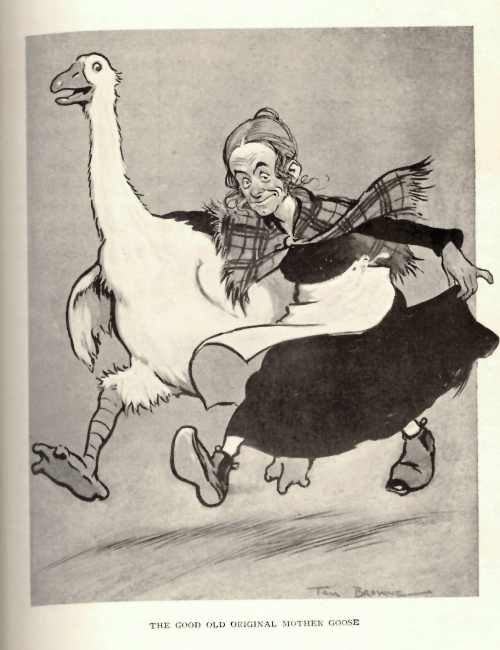 Leno became the pantomime star of the late Victorian era. The main part of Mother Goose was written for him by the writer J. Hickory Wood for the 1902-3 Christmas season at the Theatre Royal Drury Lane. The character went through a number of phases – from poor to wealthy, humble to haughty, plain to beautiful and young to a final incarnation as the good old original Mother Goose, complete with top-knot and bunion.

Mother Goose was Leno’s favourite pantomime role and was considered to be the greatest triumph of his pantomime career.

Visit There Will Be Fun – a free British Library exhibition on Victorian popular entertainments, open until March 2017, and see many other rare and wonderful treasures from the Evanion Collection.

Posted by Joanna Norledge at 4:35 PM