By Sophie Oliver, co-curator of the display ‘Wide Sargasso Sea: Jean Rhys, Jane Eyre and the Making of an Author’

Jean Rhys is amply represented in the British Library’s manuscript collection, including by several versions of her best-known (and widely loved) novel Wide Sargasso Sea (1966). Fifty years after that book appeared, and 200 since the birth of Charlotte Brontë, whose Jane Eyre (1847) inspired it, 2016 seemed like a good moment to celebrate Rhys and the British Library’s archival holdings of her work. 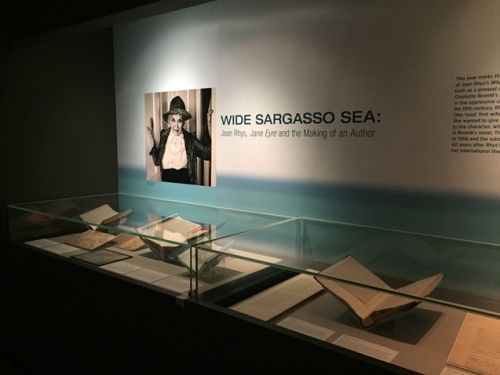 The display ‘Wide Sargasso Sea: Jean Rhys, Jane Eyre and the Making of an Author’, showing in the Treasures Gallery until 8 January, takes Brontë as a starting point. From her manuscript of Jane Eyre we’ve shown the part when Rochester takes Jane to see his ‘mad’ first wife, Bertha Mason, whom he rejects in the cruellest terms: ‘her nature wholly alien to mine […] her vices […] intemperate and unchaste’. Rhys referred to this nineteenth-century classic text as ‘frozen assets’, material to be reignited and given new life. She objected to what she felt was Brontë’s one-dimensional depiction of Bertha as a ‘poor Creole lunatic’, and resolved to write ‘her story’. Although Rhys’s letters show that she hugely admired Brontë, this oppositional stance was typical. For many literary critics, Rhys is above all a West Indian and a woman writer: her relationship to the Western canon is tangential and celebrated as such.

For her part, in work and life Rhys promoted an image of herself ‘outside the machine’, as one of her stories is titled. Yet she admitted that she longed for Wide Sargasso Sea ‘to be understood and read and so on’. The long process of drafting her final novel was spurred on by the attention that she gradually began to receive in the 1950s (having all but disappeared after Good Morning, Midnight was published in 1939) from critics, publishers and the BBC, which broadcast a radio dramatisation of Good Morning, Midnight in 1957.

The display was conceived to explore this aspect of Jean Rhys’s career – the public reception of her work and the making of her reputation in the years leading up to Wide Sargasso Sea and in the decade after, when she achieved international renown. The British Library’s Rhys archive is particularly strong on this period. For example, it holds Rhys’s corrected page proofs of the story ‘Till September Petronella’, published in London Magazine in 1960. This was Rhys’s first appearance in print since 1939, so in some ways represents the re-ignition of her literary career. She remembered it fondly for years, writing in one letter that ‘Petronella’ ‘just about saved my life’.

The Rhys archive also includes drafts of her earlier novels After Leaving Mr Mackenzie (1931) and Voyage in the Dark (1934) – pages of determined, fluent notes together with frenzied revisions and angry crossings-out. All of her earlier books were reissued in hardback and paperback in the late 1960s after the great success of Wide Sargasso Sea. The return of the 1930s fiction brought Rhys to a broad contemporary audience – not just through the books themselves, but in the form of profiles in the mainstream press and TV adaptations. The work that Rhys wrote in the interwar period seemed to fit in the 1960s, a decade of great social change. Thirty years previously she had written books and stories that listened to the marginal voices – those of women and racial minorities – that were being heard more in the 1960s. A profile in the fashion and lifestyle magazine Nova that is included in the display suggests that Rhys’s fictional obsession with flawed women spoke to that publication’s celebration of female identity in all its contradictory guises.

As well as manuscripts, then, the display draws on the full breadth of the British Library’s collections, including newspapers and magazines, formats that were central to the story of Rhys’s rise to fame. Her presence in the press on both sides of the Atlantic in the 1970s confirms that Rhys and her work had become fashionable. Two newspaper items that we weren’t able to include refer to a Rhys ‘cult’ in this period. Julie Kavanagh’s 1974 profile in Women’s Wear Daily, ‘Rhys-cycled’ (illustrated), connects the republication of Rhys’s earlier work with the fashion system’s continual updating of old trends. Originally a fashion trade journal, by this point WWD was a ‘fashion gossip’ magazine with a mass market, decreeing who and what were the latest social and cultural phenomena. In late 1974, it seems, Rhys was. The previous year, aged 82, she had even been given her own fashion shoot in The Sunday Times, styled by the notorious fashion editor Molly Parkin (illustrated). The photographs were taken by Norman Eales, whose images of Jean Shrimpton and Twiggy had appeared in Vogue, Queen and Cosmopolitan. 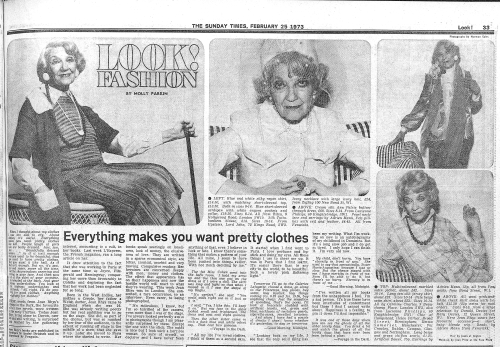 The fashion press often picked up on Rhys’s own love of clothes and their importance in her fiction, where they feature as signs of hope and despair – the promise of fulfilment and individuality or a way to blend in, but also the threat of deadening sameness. In the Sunday Times piece, contemporary quotes from Rhys are interwoven with fashion-conscious citations from her writing. Some have a more abstract link to fashion, such as this from Voyage in the Dark: ‘It was one of those days when you can see the ghosts of all the other lovely days. You drink a bit and watch the ghosts of all the lovely days that have ever been from behind a glass.’ But in the context it seems clear: the way that the past haunts the present is like the return of an old style. Much like Rhys herself, then: a ghost who, last seen in the 1930s, returned with new relevance in the 1960s.

Sophie Oliver is finishing a PhD at Royal Holloway, University of London. Her article ‘Fashion in Jean Rhys/Jean Rhys in Fashion’ will be published in the journal Modernist Cultures in November 2016.

Posted by Joanna Norledge at 9:19 AM