Until the passing of the Theatres Act in September 1968, which removed the legal necessity for all stage plays to be licensed by the Lord Chamberlain, these are the dread words which a producer might read when he opened the letter from the Lord Chamberlain’s Office informing him of the cuts and alterations required in his script before the Lord Chamberlain was prepared to issue a licence.

There had been a permanent official in charge of staged entertainments since 1545, in the shape of the Master of the Revels, but only after the return of Charles II in 1660 did the Lord Chamberlain begin to take a serious interest in censorship and the regulation of the theatre. The first Theatres Act of 1737 came about because Sir Robert Walpole was suffering under the satirical attacks of Henry Fielding and others on the shortcomings of his ministry. This act reduced at a stroke the number of “legitimate” theatres in London to two, Covent Garden and Drury Lane. While this provision was lifted by a second Theatres Act in 1843, the censorship of new plays continued until 1968. Some of the new regulations laid down by the 1843 Act continued unchanged for more than a century. The Lord Chamberlain’s Office levied a charge for reading a play – one guinea (£1.05) for a one act play, and two guineas (£2.10) for plays longer than one act. The Office kept extremely careful records of all plays and monies received, largely because the Examiner of Plays, the functionary whose job it was to read each play and advise the Lord Chamberlain whether they were fit for licence, was paid these sums of money rather than a salary. These careful lists survive in the British Library as the Lord Chamberlain’s Day Books.

Only in 1911 was the Examiner of Plays required to write a formal report recording the grounds on which he had decided (or declined) to recommend that a play be licensed. The files which grew around the reports submitted by the Examiners have survived as the Lord Chamberlain’s Plays Correspondence. In later years a file for a controversial play might contain everything from complaints from members of the public – “This is the New Babylon!” raged one anonymous correspondent about a risqué revue of 1937– to press cuttings, copies of police reports, and ticket stubs and witness statements for the occasions when a play’s producer was prosecuted for presenting unlicensed material.

The rules by which plays were judged fit or unfit came about as a result of the 1909 Joint Select Committee on the theatre. The Committee suggested that the Lord Chamberlain should license any play submitted to him unless he considered it

In practice this meant that a play must not have living persons as characters, or those recently dead, whatever the manner in which they were depicted.   This rule applied particularly to the Royal Family: no plays about Queen Victoria were permitted before the late 1930s. No Biblical personage, and certainly not God or Jesus Christ could appear as a stage character, however reverent the production.

No wonder that a satirical alphabet of the 1930s had under the letter C : “C is for CENSOR, who keeps the stage clean, by ruling out God and the Crown as obscene.”

A development of rule (a) led to the set of rules concocted to regulate the nude reviews which appeared in London and elsewhere from the late 1930s, the most famous of which were the long series of Revudeville shows at the Windmill Theatre in Soho. Occasional complaints about indecency of dress on stage were nothing new, and there had been a considerable brouhaha when a revue in Coronation Week 1937 had been accused of featuring topless dancers. But in April 1940 the Lord Chamberlain of the day, Lord Clarendon, held a conference on stage nudity and the supposed decline in moral standards. Rather like the 1909 Select Committee, it achieved little except to formulate the famous rules, summarised as “If it moves,it’s rude”. The nude tableaux had to resemble works of art, and exhibit genuine artistic merit. The lighting had to be subdued, and no movement whatsoever was permitted – the girls posing nude were not even allowed to smile. Furthermore, before any nude pose could be exhibited, a photograph had to be submitted for official approval. Many though not all of these photographs survive in the Lord Chamberlain’s Plays Correspondence files, sometimes neatly annotated with the words “YES” or “NO” by a member of the Lord Chamberlain’s staff. 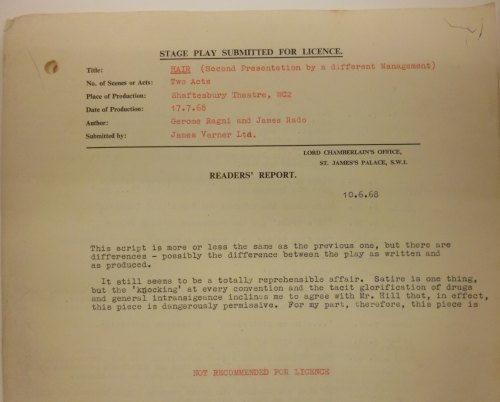 Moves to liberalise and then to abolish altogether the laws on censorship gathered pace in the middle and late 1960s. By the time the Joint Committee on the Censorship of the Theatre began its meetings in the summer of 1966, radical change was unstoppable. The first draft of the bill which became the 1968 Theatres Act saw the light in January of that year. By July it was ready for the Royal Assent, and on 26 September 1968, it became law. The very last play to be licensed by the Lord Chamberlain was As long as I live, a melodrama written for amateur performance, read and recommended for a licence by Examiner Charles Heriot less than a week before the act became law. But the most famous play of 1968 remains the “tribal love-rock musical” Hair, submitted three times in the spring and summer of 1968 by three different managements, each time refused a licence. It is perhaps not accidental that Hair – complete with expletives and full-frontal male nudity -eventually opened at the Shaftesbury Theatre on 27 September 1968, the very day after the new act became law.

This blog is part of series for Banned Books Week 2016. See also Melvin Burgess’s blog on Censorship and the Author, curator Christian Algar on the ‘corrected’ Il Decamerone, curator Tanya Kirk on The Monk, the Bible and Obscenity, The Book Banner who inspired Banned Books by curator Alison Hudson, Banned From the Classroom: Censorship and The Catcher and the Rye by curator Mercedes Aguirre and a blog on Press Freedom and its Limits in Revolutionary Vienna by curator Susan Reed.