Cathy Courtney talks about Ken Campbell at the British Library

Earlier this year, the British Library completed its collection of the published works of the British artist Ken Campbell, with his most recent work You All Know The Words (2016). The British Library is the only Library in UK to hold all the works. At the end of October, the Library held a celebration of the work of Ken Campbell. Reprinted here is the text from Cathy Courtney’s introduction to the evening. 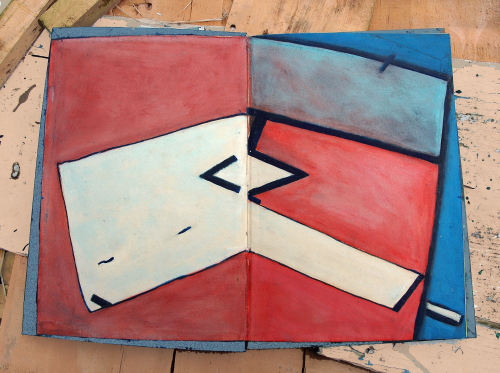 You All Know The Words (2016). Image used by kind permission of Ken Campbell

I speak as one of the first beneficiaries of the British Library’s decision to augment its collection of Ken’s books, and was lucky enough to spend some time with a selection of them last week in preparation for tonight, and to re-encounter works I hadn’t seen for at least a decade as well as to meet more recent books for the first time.   I’m not a member of the British Library staff so I feel I can also pay tribute to the curators here for their commitment to Ken’s collection and their sensitive and excited response to it.

Beginning in 1983 I wrote a column on Artists’ Books for Jack Wendler and Peter Townsend’s magazine, Art Monthly, and it was Peter who led to my meeting Ken. The world of artists’ books is a hotly disputed one, full of splits and factions about what does and does not count as an artists’ book. At one extreme are the de luxe livres d’artistes, limited editions usually printed on fine paper, often images supporting texts and the two separated on different pages with masses of white space on the deckle edged sheet. At the other extreme are the much cheaper multiples, making use of new technology, often deliberately cocking a snook at the livres d’artistes, rejecting high spec values, usually costing little and often given away. In Britain, at least, the supporters of one school were always anxious to knock down the supporters of the other.

There were ten issues of Art Monthly a year, not much space therefore to cover the field, and I was determined to use the column for a broad range of work. The years writing for Art Monthly were ones in which I was heavily pursued by the book artists, not least by belligerent phone calls before 8 o’clock in the morning from Ken and from another artist who used to ring me at 11 pm and talk for an hour minimum. It’s not unconnected to this that I bought my first telephone answering machine.

Ken Campbell’s books are an outstanding achievement and his is one of the strongest voices we have in the field. His works are a compelling amalgam of erudition and violence, raw pain and refinement, anger and joy. In many ways he has created a place in the spectrum between livres d’artistes and multiples that is his ground alone.

His books are remarkable for a number of reasons and I have only time to refer to a few.   One aspect is his professionalism. Ken trained as a printer and is rare in having come to make books with a deep intellectual and hands-on knowledge of the materials and how to control them. Skilled in how to manipulate the letterpress perfectly, nevertheless he chose instead to instigate a fierce and warlike dance with the process, courting accident and breakage, and this vitality is wonderfully captured in the results. You can feel the energy burning off the pages. The massive scale and solemnity of some of the works makes this even more of an accomplishment. Whilst there has been plenty of prior planning, many of his decisions were made in the heat of action on the printing bed and with relish at the semi-accidental richness thereby achieved.   He’s a risk taker backed by proficiency, too restless a soul to take the safer route. 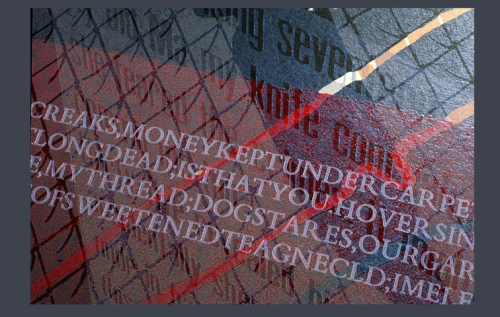 He’s also an ad-libber with a learned tongue. Although some of the works are collaborations, another characteristic not shared by many other book artists is Ken’s repeated taking responsibility for both text and image, these two elements being distilled into a single entity, the content inseparable from the form.   His texts are an extraordinary synthesis of the personal and the learnt, the historical and the now. When he quotes from religious or historical texts he does so as if these are deeply felt, avoiding the tripwire of bathos, which is no easy feat. He is a poet with a natural and muscular brimming over of language from which to edit. Anger at injustice is a theme which runs through several of the texts, whether political in the wider sense or closer to home, and his engagement, conflict with and love of his family – his parents, his wife and daughters – bleeds into the works without veering into sentimentality.

Wearing another hat, I am speaking as Project Director for an oral history project, Artists’ Lives which National Life Stories, an independent charity based here at the British Library, runs with Tate.   Ken was recorded for Artists’ Lives in 2005 and his recording will go online shortly.   As with most National Life Stories recordings, it’s an in-depth life story, made over several sessions, covering biographical material as well as professional experience.   It was a perfect platform for Ken, and draws together the elements of his personal life which consume him alongside much detail about his work and how it has been made, and will be very useful for anyone wanting to know more about how the books in the British Library’s and about his sculpture and painting.

National Life Stories has to raise funds for all its recordings. Ken’s was supported by Yale Center for British Art, and I would like to include a message from Elisabeth Fairman, Chief Curator of Rare Books and Manuscripts at the Center. She emailed me to say

“how pleased the Center is to also have a complete collection of Ken’s work, someone whom we consider one of the greatest book artists of his time”.

Following on from the event in October, many of the Artists’ Lives recordings have now been made available on the British Library’s website. These can be heard at http://sounds.bl.uk/Arts-literature-and-performance/Art

Posted by Joanna Norledge at 3:59 PM