Recently, as part of our cultural preview for 2017, we announced that the personal archive of P.G. Wodehouse has come to the British Library on loan and is to be made publicly available for the first time.

P.G. Wodehouse (1881-1975) was a prolific writer and is one of the most widely read humourists of the twentieth century. Publishing over ninety books in his lifetime, he is best known as the author of the well-loved series of novels featuring Jeeves and Wooster. He also forged a successful career as an acclaimed lyricist, satirist and social commentator.

Sir Edward Cazalet, who has made the archive available to the Library, said:

“I am so delighted that the British Library is to provide a home for my P.G. Wodehouse archive. Given that Wodehouse is now ranked as one of the leading, if not the leading, humourist authors of the 20th century writing in the English language, I believe that this broad-based collection will not only bring much pleasure and laughter to its readers but will also prove to be critical to any serious study of 20th century humour and literature.

PGW would have been so proud to know that he is now counted amongst his great literary heroes, headed by Shakespeare, Tennyson and so many others. This archive I have built up over a period of more than 40 years since Plum’s [Wodehouse] death in 1975. It contains many of his drafts and manuscripts, and has copious quantities of correspondence with composers, authors, relations and close friends, as well as a wide range of other interesting documents.”

The archive spans material dating from 1900-2005 and includes manuscript drafts and notebooks relating to Wodehouse’s fiction and essays, among them Aunts Aren’t Gentlemen, the last novel in the Jeeves and Wooster books, and his final published novel, Sunset at Blandings. “Keeping it from Harold”, story by PGW in the December 1913 issue of The Strand Magazine. Image reproduced by kind permission of the Trustees of the P.G. Wodehouse Estate.

The archive also contains material relating to his writing for theatre, film and cinema. While in America Wodehouse wrote the lyrics for a number of American musicals in collaboration with composer Jerome Kern and Guy Bolton, playwright and librettist. The collaborators were very successful and at one point had five shows running simultaneously on Broadway. Wodehouse also worked in Hollywood where he was one of the script writers of Those Three French Girls. The screenplay for this is also part of the archive.

Wodehouse’s correspondence reveals his conversations with family, friends, authors and fellow artists. These include letters from Evelyn Waugh - who described Wodehouse as his ‘revered master’ - and from the American lyricist Ira Gershwin. One of his letters to his wife, written while he was under arrest in France, has a rather interesting story.  The letter did not reach Mrs Wodehouse until it was rediscovered in a house in Frimley in the summer of 1977, and sent to her by Peter May, whose neighbour had discovered the letter when sorting through her late husband’s effects. 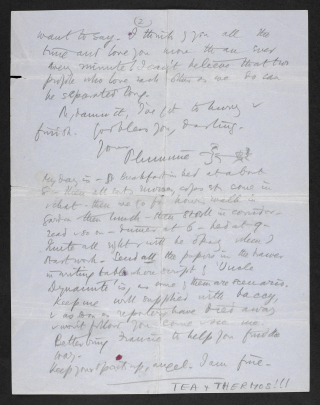 Letter from PGW to his wife Ethel, 25 November 1944. Images reproduced by kind permission of the Trustees of the P.G. Wodehouse Estate.

The archive also includes the handwritten manuscript of Wodehouse’s ‘Camp Diary’. Having been interned by the German Army in various temporary prison camps Wodehouse eventually arrived in a converted asylum at Tost, in Upper Silesia. During this time he kept a diary, which he turned into a series of talks with which he entertained his fellow detainees. With typical dry humour, these talks reflected the traditional code of honour of the detainees, their practice of making light of their discomforts and remaining stoic, and showed how they did their best to lift their spirits when faced with challenging and dangerous circumstances.

Posted by Joanna Norledge at 4:02 PM