Will Self’s archive acquired by the British Library

The British Library has today announced its acquisition of the archive of Will Self. Probably Britain’s leading satirical writer, Self’s dystopian visions and outrageous scenarios hold up a distorting mirror to contemporary British society. Prolific as a writer of fiction and as a journalist, he is also prominent as a public intellectual, broadcasting at times controversial views in the mainstream media. The publication of his short story collection, The Quantity Theory of Insanity, brought him to public acclaim in 1991. Since then, he has written ten novels – among them Cock and Bull (1992), Dorian (2002), a re-telling of Oscar Wilde’s classic story set in late 20th century Britain, The Book of Dave (2006) and Umbrella (2012) which was shortlisted for the Man Booker Prize – as well as novellas and collections of shorter fiction, and five collections of non-fiction including Perfidious Man (2000), an exploration of modern masculinity. After graduating from Oxford, Self initially worked as a cartoonist for the New Statesman and as a stand -up comedian. He currently holds the position of Professor of Contemporary Thought at Brunel University. Will Self typing on his favourite typewriter

Self’s work is predominantly set within London and the city’s location, colloquialisms and sub-cultures appear throughout his books. Drugs, addiction, aberrant psychology, dystopia, psychogeography and the politics of urbanism are also recurrent subjects in his writing. Along with William Burroughs and Hunter S. Thompson, Self cites J.G.Ballard as a mentor (the two men were good friends, particularly towards the end of Ballard’s life). Like Ballard, Self writes to shock and de-familiarize, deliberately to provoke and unsettle the reader. He has said: “I don’t write fiction for people to identify with and I don’t write a picture of the world they can recognize. What excites me is to disturb the reader’s fundamental assumptions. I want to make them feel that certain categories within which they are used to perceiving are unstable.”

The archive that has recently arrived in the Manuscripts Store at the British Library consists of 24 large boxes of papers along with artwork, audio-visual material and the author’s computer hard drive. There are extensive successive literary drafts relating to all of Self’s major works as well as to his collaborations with Ralph Steadman and his journalism. The collection includes approximately 100 diaries and working notebooks: many of them used as commonplace books, which contain diary entries, research notes, literary drafts and sketches. Self’s correspondence is also included in the archive: highlights here include a series of letters from J.G. Ballard, in which Ballard discusses - among other subjects - the David Cronenberg adaptation of his novel, Crash, and his reading of Self’s re-working of the ‘modernist idea’. Other notable series of letters include those from John Banville, Iain Sinclair, Martin Amis and Oliver Sacks, revealing Self’s associations and networks and the ways in which his ideas and works have resonated outwards into the cultural landscape.

Self’s archive joins the British Library’s extensive collections of the archives of contemporary writers, taking his place alongside the archives of his friends and contemporaries including J.G. Ballard, Hanif Kureishi, Graham Swift, Angela Carter, Beryl Bainbridge, B.S. Johnson and John Berger. It will offer a rich resource for future researchers, students and everyone with an interest in contemporary writing and culture. Work to catalogue the archive has already begun and we plan to make the collection available towards the end of 2017.

Will Self said: ‘As a London writer I’m both honoured and pleased that my literary archive will be held at the British Library as a resource for scholars. Whether or not the jottings of a late twentieth/early twenty-first century novelist will be of much significance as the digital whirlwind continues to radically alter our culture and society, I don’t know – but there it is, and there it will remain, long after I myself have been pulped.’ 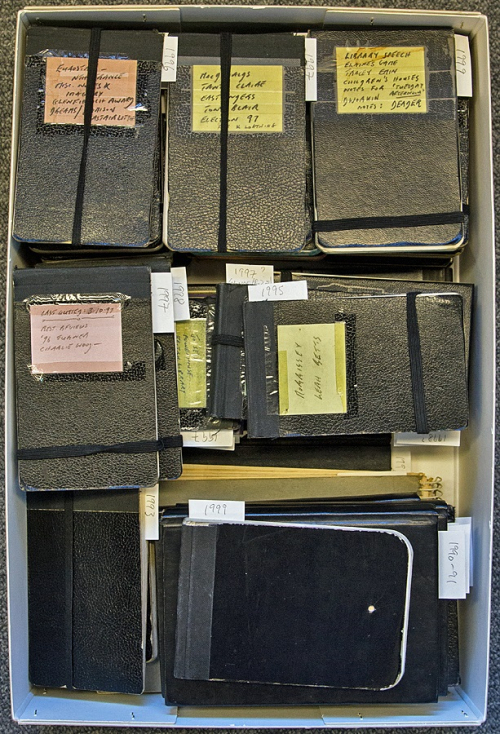 Self’s archive, like most of the contemporary archives we acquire, is a hybrid archive containing both paper and born digital material. The collection includes his computer hard drive which holds a wealth of electronic manuscript drafts and approximately 100,000 emails along with a huge number of other files yet to be mined and identified (including downloads of his i-Tunes, which offer an intriguing line of investigation for future users of the archive).

When Self came into the British Library recently to talk about his archive, he brought with him his favourite typewriter. His recent blogs and talks (which the Library has also preserved as part of the UK Web Archive) have frequently addressed the impact of digital culture on the future of writing. Self is a particularly interesting writer from the point of view of his working processes: earlier in his career, he wrote directly onto the computer; later on, he switched to writing long had and uses a vintage typewriter for earlier drafts. His shift to the typewriter is a creative strategy to address anxieties about the digital and its effect on the human mind and creative consciousness:  a deeply set need to feel the physical engendering of language and the weight of words upon the page. The opportunity for examination and analysis that Self’s born-digital traces offer are particularly interesting in the context of the cultural debate about the digital of which Self is at the forefront. The hard drive gives curators at the British Library an exciting opportunity to emulate the working environment of the writer as we continue to confront the challenges presented by these kinds of contemporary collections and work to make these valuable resources available for the future.

On Being Archived: Will Self, Hanif Kureishi and Guests, will take place at the British Library on 24th March 2017 at 7pm. Please see the Library’s Events pages for more details.

Posted by Joanna Norledge at 12:46 PM