First report from the Will Self archive: family matters

Will Self’s review (for the New Statesman) of Peter Ackroyd’s Albion: The Origins of the English Imagination (2002) begins with the suggestion that his grandfather would have enjoyed the book. Before telling us why (Cockney visionaries both, with a tendency to compendiousness), we are treated to a pen-portrait of grandfather Sir Henry:

‘Albert Henry Self was the son of the conductor on the Number 11 tram. A Fulham boy, he was waiting table in a cafe when a patron spotted his ability to add the bill up with a single saccade of his bulbous blue eyes. The cafe's patron became my grandfather's, putting him through school and sponsoring him while he took the civil service examinations. Henry Self ended up as a heavyweight mandarin, Beaverbrook's permanent undersecretary during the war and, latterly, chairman of the Electricity Board. A Knight of the Garter, and one time President of the Laity of the Church of England, in his old age, my grandfather's cockney origins only emerged when he'd had an extra Guinness or three over lunch. On these occasions, he'd beat time with his knife on the table and give us a rousing chorus of "Don't Have Any More, Mrs Moore", much to the consternation of my authentically genteel grandmother, who'd bleat: "Really Henry!"’

As an unexpected bonus, the archive of Will Self at the British Library includes a fascinating documentary foreground: an assortment of family papers – photographs, letters, diaries – that have passed into the author’s possession. Cataloguing of the substantial archive is currently well-advanced: the family papers have been addressed, and work has now commenced on the core of the collection, the multiple drafts of Self’s fiction. Among the family papers is Sir Henry’s compendious ‘The Divine Indwelling’, a grand philosophical summa in five volumes that attempts a ‘reconciliation of science, religion and philosophy’. 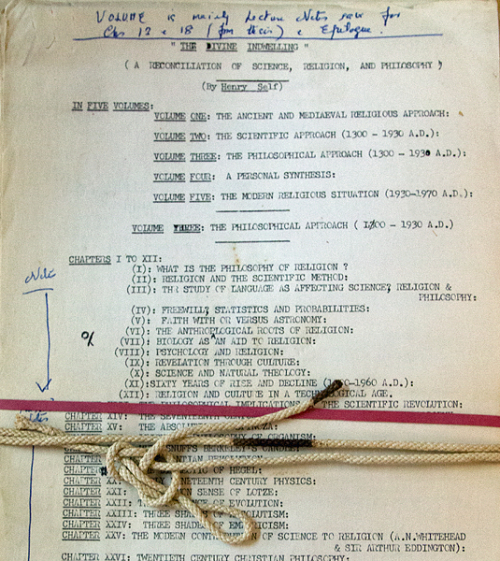 Sir Henry Self, ‘The Divine Indwelling’. Annotations in blue ink are in the hand of his son, Peter Self.

It was this unpublished work (not unpublished for want of trying, however, as Sir Henry’s correspondence in the archive records) that prompted Self to compare his grandfather’s synthesising habit of thought to that of Peter Ackroyd. But Self quickly makes brutally plain the all-important difference between them – the pre-loaded punchline of his comparison – that ‘Ackroyd can write’.

‘Before he too expired from a surfeit of prolixity,’ Self’s review continues, ‘my father repeatedly enjoined me to "do something" about The Divine Indwelling’. In Walking to Hollywood (2010, p. 253), we glimpse ‘the yellowing typescript’ resting – waiting wordily for attention – on the top shelf in Self’s study. Perhaps the patrilineal burden of what to do about Sir Henry’s magnum opus – his laboursome philosophical folly – has now been resolved, custody secured, by its incorporation in the archive of his grandson.

The earliest item in the archive is a Victorian family photograph album, from Lady Rosalind Self, Will Self’s grandmother. The gallery of stiff portraits that fill most of the album give way in the later pages to less formal ‘snaps’ of her two sons, Peter and Hugh Michael. Rosalind Self was the daughter of Sir John Otter. As Mayor of Brighton (1913-15), Sir John initiated the building of The Chattri war memorial, a monument to the Sikh and Hindu soldiers who died in the military hospitals of Brighton. Sir John had served in the Indian Medical Service. The Chattri, a Grade-II listed structure, sits on the South Downs in a remote spot above Patcham, overlooking Brighton. It was unveiled by the Prince of Wales in 1921, as photographs in the album record. The archive includes photographs of some of the original architectural designs (which show that initially a somewhat larger monument had been envisaged). Lady Self was the granddaughter of the Anglican educationalist the Rev. Nathaniel Woodard, who founded eleven schools for the rising and increasingly affluent Victorian middle class. The first school was Lancing College, near Lewes, founded in 1848. In 1843, Woodard had published A Plea for the Middle Classes. He summarised his purpose as the provision of ‘a good and complete education for the middle classes, at such a charge as will make it available to most of them’. In 1925, Sir John Otter published a memoir of Woodard.

Henry and Rosalind Self lived in Brighton, not far from Lancing, in a house in Vernon Terrace that Rosalind had inherited. Peter, Will Self’s father (who held chairs in Public Administration at the London School of Economics, and subsequently at The Australian National University at Canberra) and his brother Hugh Michael (Queen’s Counsel) were both boarders at Lancing College. It had been their mother’s wish that her sons should board there (Henry had been in favour of Brighton Grammar School). From time to time, the brothers must have passed the impressive tomb of their great-grandfather, Nathaniel Woodard, in the grand Gothic setting of Lancing College Chapel, a stolid reminder of the weight of ancestry, and of scholarly expectation. 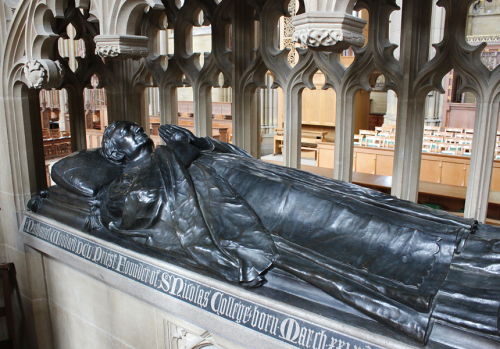 The archive includes Peter Self’s unfinished draft memoir ‘Through a Glass Brightly’ in which he recounts his childhood and his memories of Lancing: ‘my life at Lancing, which seemed at the time interminable, sucked me into a complete, insulated world of intense experience, which made the “real” world outside, for which we were supposedly being prepared, seem remote and unreal’ (f. 45).

Will Self’s American Jewish mother, Elaine (née Rosenbloom) first enters Self’s fictional world in the early story ‘The North London Book of the Dead’, written following her death in 1988. Elaine later takes centre-stage as the (Joycean) Lily Bloom, the sharp voice and the lively dead consciousness of How the Dead Live (2000). The archive includes her diaries and journals (most as copies), which register something of her misanthropic tone and take on life, echoed in the acerbic voicing of How the Dead Live: ‘So many people left to disparage – so little time’ (p. 55). The archive includes the letters she received throughout her life from American and English family and friends, and from her husband Peter.

The Self family letters in the archive span three generations and the three continents of Europe, America, and Australia. After Peter Self emigrated to Australia in 1980, to teach at Canberra, he usually wrote an airletter to his mother on a Monday; they form the sort of tidy pile an archivist loves to find. Will Self’s letters to his father are of particular interest: they make frequent and illuminating reference to his writing. Some were sent from the remote island of Rousay in the Orkneys, a quiet location where many of Self’s novels from the 1990s received their final drafts. 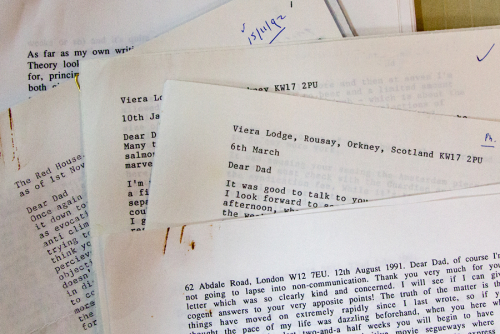 In a recent interview published in the Paris Review (2012), Self described his first book, The Quantity Theory of Insanity (1991) – a collection of short stories, most of which satirise the world of academic research in the social and psychiatric medical sciences – as an act of parricide: ‘It takes the piss out of my father and his friends and their irrelevance as I saw it and the perniciousness of their discourse and the way in which people believed it.’ The symbolic murder of the father, as Self recalls, was not an entirely conscious action but was ‘done with a sleight of mind’. In ‘My Old Man’ (The Guardian, 15 June 2008), he acknowledges a shift in his appreciation of his father: ‘Ours was an ambulatory, ludic and pedagogic relationship [….] As we come to resemble our fathers, so we re-encounter the individual who reared us’. Certainly, the physical resemblance of Henry, Peter, and Will, all standing at some six and a half feet tall, is striking. Temperamentally, they all enjoyed and enjoy, in Self’s felicitous phrase, the pleasures of ‘happy disputation’. In the light of family history, it is perhaps not surprising that Will Woodard Self has recently turned to teaching. In March 2012, Self was appointed Professor of Contemporary Thought at Brunel University.

Sir Henry Self, a working-class son, was, by all accounts, a man of extraordinary talents, not least in respect of his exceptional capacity for memory. He used his time commuting from Brighton to London to gain eleven degrees. Sir Henry’s prodigious memory is alluded to in My Idea of Fun (1993), in the eidetic – or photographic – memory of young Ian Wharton; his ‘eidetiking’ facilitates the ominous entry of The Fat Controller into his life. In the same novel (partly set on the Brighton coast familiar from Self’s childhood), the shadowy absence of Ian’s father – ‘little more than a ghost in the domestic machine’ – seems to reflect the absence of Peter Self from the family home (from the age of nine). Lily Bloom reflects that she married into a family of ‘true shabby gentility’, a family of ‘nursery names’. In the letters in the archive, we discover that Lady Self is always addressed as ‘Mumbles’ and always signs her letters by the same name, to everyone in the family. Sir Henry’s ‘nursery name’ was ‘Dids’.

Much of Self’s fiction is framed by an exploration of masculine identity, from Cock and Bull (1992) to Dorian (2002), and The Book of Dave (2006). Self’s memoir of his father in the introduction to Perfidious Man (2000), at once a warmly humorous and distancing account, is also enlightening on the subject. Drafts of the novel Umbrella (2012) have been filed by the author along with Sir Henry’s passport and several genealogical research papers. As the author commented when Umbrella was short-listed for the Man Booker Prize: ‘Having reached my 40s, like many another slightly nerdy man (and I think it is a mostly male preoccupation), I started looking into my immediate ancestry.’ The family papers included in Will Self’s archive at the British Library suggest that however extreme the alternative reality his fiction portrays, however skewed and re-scaled the world it depicts, its well-spring is quite likely to be, bubbling beneath, a family matter.

Posted by Joanna Norledge at 9:16 AM