‘Post-it’ notes in the Will Self archive

‘My books begin life in notebooks, then they move on to Post-it notes, the Post-its go up on the walls of the room […] short story ideas, tropes, metaphors, gags, characters, etc. When I'm working on a book, the Post-its come down off the wall and go into scrapbooks.’ (‘Writers' Rooms: Will Self’, The Guardian, 6 April 2007.)

The photographs capture the scale of the author’s devotion to the little yellow pad. The scrapbooks into which Self has gathered the ‘post-it’ notes now form part of his archive at the British Library. Grid-like on the wall, and grid-like in the scrapbooks, the notes intrigue and fascinate. They are little doorways into the text, little honeycomb cells of access. 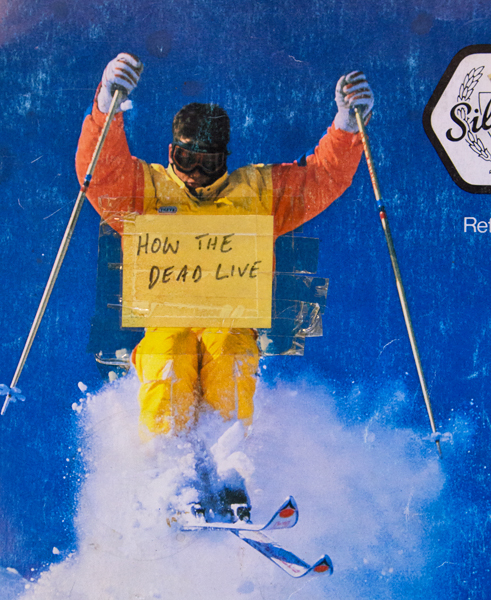 Having recently read How the Dead Live (2000), a group of ‘post-it’ notes in the novel’s scrapbook caught my eye. 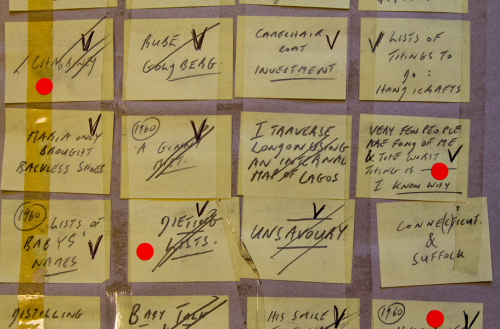 I smiled at the note about the minicab driver who crosses London by an internal map of Lagos (second row, third from left – see p. 310 of the novel). I remembered Lily Bloom’s heavy-smoking fantasy of an elaborate contraption to feed her a continuous supply of ready-lit cigarettes – think cogs, wheels and pulleys, think Heath Robinson – drawn by the American cartoonist Rube Goldberg (first row, novel p. 300). I noted Lily’s anxious ‘dieting lists’, and I caught her familiar combative tone in ‘very few people are fond of me’ (second row) although I can’t find the words in the book. I then wondered about the striking phrase ‘ginny mist’ (second row, second from the left). When I found ‘ginny mist’ in the published text (p. 101), I saw that the image had been deftly extended and deepened: ‘I remember this lack of sensation; it’s happened enough times to me in this bedroom, usually in a ginny mist, a forest of juniper’. 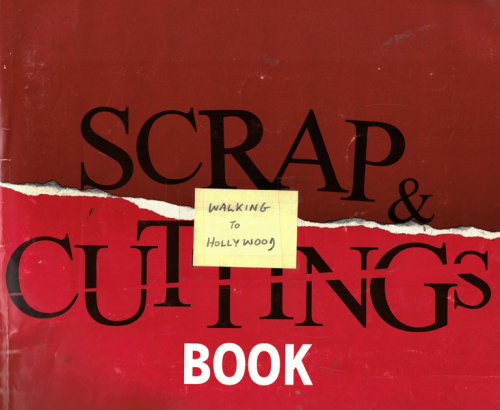 Looking through the scrapbook for Walking to Hollywood (my current reading), I discovered a group of ‘post-it’ notes on Scientology. The unreliable narrator of the novel, a writer called Will Self who has lost his capacity to suspend disbelief, goes on a walking odyssey to Hollywood to discover who killed the movies, and has CGI firmly in his sights. In this novel of seems and simulacra, everyone looks like a familiar actor, even Self, who is ‘played’ by Pete Postlethwaite and/or David Thewlis. ‘Actors feel like Thetans’ says one post-it note (see below, second row, second note from the left). L. Ron Hubbard’s cult is described in the novel as a mash-up of ‘Astounding Stories, the Bhagavad Gita and The Psychopathology of Everyday Life’ (p. 141). 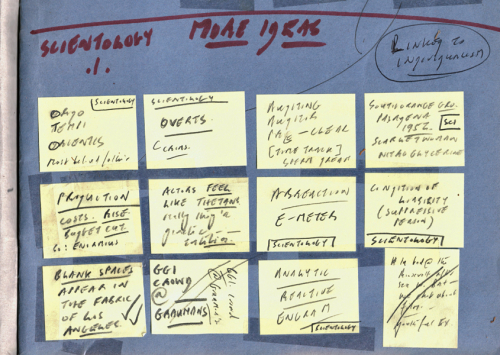 In the late 1980s, the narrator once ‘inveigled’ himself on to an introductory Scientology weekend course at the Saint Hill Manor headquarters, near East Grinstead, but was firmly rejected when they discovered his ‘homosexual inclinations’. Thereafter, he was repeatedly rebuffed: ‘over the coming years I went on pitching up at Tottenham Court Road, in disguises and under assumed names, armed with strategies for “fooling” the Capacity Analysis. It was all to no avail: the smiling Scientologists would let me take the test again, then send me on my way, with the advice that I see a doctor, a therapist, a priest – do anything, in short, but submit myself to their own mind control’ (p. 141). Among the background notes for Walking to Hollywood are the results of a Scientology personality test displayed as a graph (Hubbard’s OCA, the so-called ‘Oxford Capacity Analysis’). The test was undertaken by one (thinly disguised) Wihh [sic] Orr at the Scientology Life Improvement Center, Sunset Boulevard, 14 June 2008.

Returning home from Los Angeles, Self finds that the (cartoon) ‘superpowers’ he possessed in LA have vanished, only to be replaced by a growing sense that his ‘mental faculties’ are deteriorating. He walks the crumbling coastline of East Yorkshire and meditates morbidly on ‘the fuzziness and forgetfulness’ (p. 329) that has descended on him. Like the cliffs he walks along, his foot-weary narrative is eroded and ‘breaks off’, along with a sense of purpose and identity: ‘This would be a unique walk of erasure – a forty-mile extended metaphor for my own embattled persona, as its foundations were washed away’ (p. 345). 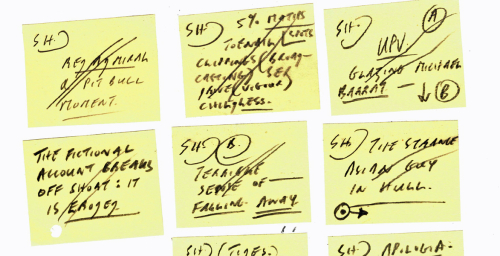 ‘The fictional account breaks off short: it is eroded’.

Before starting out on his littoral tramp of East Yorkshire – an ambulatory coda to the morphing masks of LA – Self muses: ‘It was true that in the decade since I had stopped drinking and taking drugs my short-term memory seemed to have improved; at any rate, I no longer needed the elaborate system of Post-it notes stuck to the walls of my writing room that had for years served me as a kind of random access. If I maintained this, it was more as an art installation, or magic ritual […] (p. 330).

And so perhaps we have then, in a sense, in the Walking to Hollywood scrapbook, Self’s final scrapbook post-it note: not the very last physically – the pages of notes continue beyond it – but the note that points, with the satisfying force of circularity, not only to ‘post-it’ notes as a subject within the text but also to the end of the writer’s practical need for them. The art installation has had its final show. RAM is no longer required on the walls. 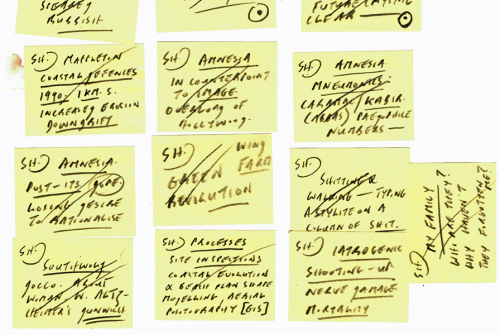 However, Self quickly decides that his reasoning for the end of the writing room installation is delusional. It is not that his short-term memory has greatly improved, it is just that he now works differently, is better at his trade: ‘I now wrote books with the workmanlike despatch of a carpenter turning out tables, this busy practice obscuring the loss of much I had once known’ (p. 331).

Next week, I start to catalogue the two novels that followed the ‘wayward and melancholic’ (Self’s description) Walking to Hollywood: they are Umbrella (2012) and Shark (2014). A cursory glance at what the boxes contain suggests that the narrator is indeed an unreliable fellow. Not only are there yellow notes hiding in the drafts of Umbrella, but there is also a scrapbook for Shark. Perhaps we really shouldn’t believe a word he says.

Chris Beckett’s blog on the family papers in the Self archive is here:  http://blogs.bl.uk/english-and-drama/2017/02/first-report-from-the-will-self-archive-family-matters.html

Images of material from the Will Self archive are used with kind permission of the author.

Posted by Joanna Norledge at 2:57 PM