Visual Verses: John Vicars’s God in the Mount, or Jehova-jireh, 1641.

George Herbert’s Easter Wings (1633) is the most renowned example of an early modern English pattern poem; it appears in all the anthologies and has been widely discussed and analysed. So, it is a real treat to find an example of an early printed pattern poem that is seemingly little-known, especially when it comes from a surprisingly incongruous source having been composed by a militant Presbyterian iconoclast.

John Vicars (1580-1652) schoolmaster and poet, is remembered most for his Parliamentary chronicles printed during the 1640s, a series of newsbook-style pamphlets written in the sermon rhetoric of popular puritanism. In his sixties by the time of the Great Rebellion he wrote in favour of iconoclastic reform and in praise of Parliament’s efforts to bring it about. He specifically contributed to the literature of iconoclasm with The sinfulness and unlawfulness of making or having the picture of Christ’s humanity (1641) in which the poet William Prynne also contributed a verse against images. Vicars gleefully chronicled incidents of the removal of images, crucifixes, popish books and ‘Babylonish trinkets’, his reports manifest an un-hinged enthusiasm. Fiercely anti-Rome, he staged a dramatic scene to personally pull down a crucifix discretely located in Christ’s Hospital.

Following his sycophantic poem England’s Remembrancer, or, a thankfull acknowledgement of Parliamentary mercies to our English-nation (1641), the first of his Parliamentary chronicles proper, God in the Mount, (also known as Jehova-jireh) (1642), presents the reader with a prominent visualisation of his glorifications. The book’s first three preliminary pages hammer home its purpose as panegyric: the title page is printed in the form of a pyramid, a mount; then there is the virtual monument to the Trinity; but more playfully we see on the next page a dedicatory verse in patterned form, to the Houses of Parliament. 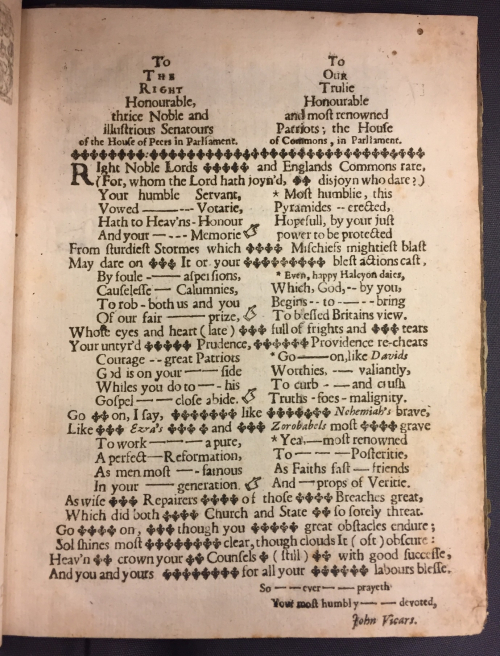 To The Right Honourable, thrice Noble and illustrious Senatours of the House of Peers in Parliament.

To Our Trulie Honourable and most renowned Patriots; the House of Commons, in Parliament.

(For whom the Lord hath joyn’d, disjoin who dare?)

The poem exalts the men of Parliament, offering prayer that their power is protected from “stormes and mischief” and wishes them courage, “to work a pure, A perfect Reformation”, to:

Go on though you great obstacles endure;

Sol shines most clear, though clouds It (oft) obscure;

And you and yours for all your labours blesse,

How can the poem be evaluated? There are some rhymes constructed in there - at the line breaks (rare and dare; blast and cast; tears and re-chears, endure and obscure etc) and arranged inside the two columns (votarie and memorie; erected and protected; valiantly and malignity; Reformation and generation etc), but its literary worth as poetry is usually best declared upon by expert critics (it’s unlikely to score well!). Another way of measuring its impact though is from some estimation about whether the visual effect ‘works’? It is quite imposing and unambiguous, but also a little crude and unsophisticated. It is always worth considering these efforts as a feat of printing and typography. In fairness, this technopaegnion (the more precise term for this type of shaped poem) does look a little sloppy: we can picture the compositor sat frowning at how to set the type with the author peering over his shoulder. The compositor has had to incorporate different sized type and make much use of em-dashes and fleurs-de-lis to fill spaces to create the pattern.

Texts presented in patterns do not just frustrate the compositor; what happens in the reader’s head when attempting to read the poem? Our minds are accustomed to conventions in the structure of letters and words when reading a text. Shaped text is spatial rather than linear, so normal reading is altered and challenged. The line-by-line arrangement is subverted and the visual impact takes primacy and dominates. Whilst our brains look for conventional patterns they are also powerful problem solvers, so these patterns make us try different ways of reading: is there one way to read it, or several different possibilities? Does the subversion and domination of the pattern detract from textual and other values of poetry? Is it pleasing to look at, or just, well, a bit annoying? It can take some time and effort to read and transcribe.

Is this innovation just a bit eccentric? Here lies its curiosity – this English shaped poem is unusual and uncommon. A previous blog-post on ‘visual verses’ mentions that continental enthusiasm for shape poems in the early modern period was not matched in British Literature. Why is this? This poem by John Vicars, the iconoclast, may help explain. Fear and hatred of idolatry lay at the root of Puritan iconoclasm. Hostility towards false, idolatrous art risked deepening into an iconophobic hatred of all art-forms which appealed to the senses. A widespread antipathy towards visual art was a part of the cultural impact of the English revolution. Religious reformers withdrew from printed ballads, stage plays and pictorial art. So, it seems incongruous that Vicars, the iconoclast, here makes use of innovation and visual images to worship and proselytise the cause of Parliament, God, the Trinity and religious Reformation. Maybe, there is intentional irony and these pyramides and monuments are being offered as an alternative to the usual Popish icons. All the same, this work of Vicars does seem to sit somewhat outside the conventions of his very own prescribed culture. 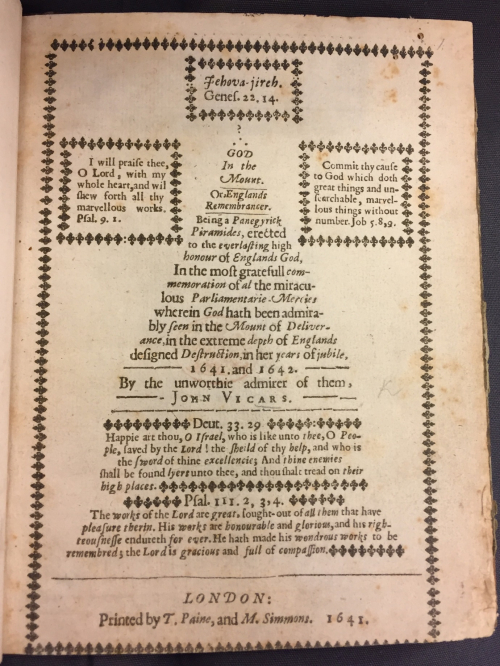 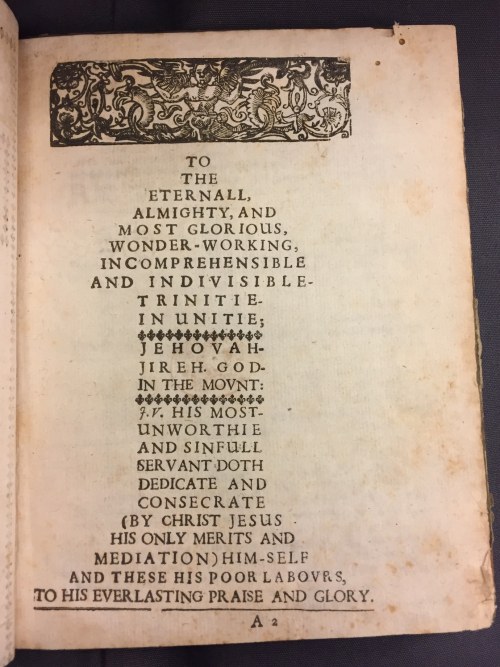 The iconoclast’s monumental tribute to The Trinitie (British Library 4103.d.34)

God in the mount. Or, Englands remembrancer. Being a panegyrick piramides, erected to the everlasting high honour of Englands God, in the most gratefull commemoration of al [sic] the miraculous Parliamentarie. .. by John Vicars  (British Library shelfmark 4103.d.34)

Posted by Joanna Norledge at 4:52 PM