Our website, Discovering Literature: Shakespeare and Renaissance Writers brings together a selection of British Library treasures and newly commissioned articles that shed light on the social, spiritual and supernatural settings of some the Renaissance period’s most engaging works. The site, which initially focussed on Shakespeare’s plays, first launched in 2016 and has now been expanded  with a wealth of new content on a wider range of writers and works, including Christopher Marlowe’s Doctor Faustus and Edward II, Shakespeare’s sonnets, the poetry of John Donne, and Ben Jonson’s Volpone and The Alchemist.

On the site, key literary works of the English Renaissance are explored through their cultural contexts: you can read about the real women who inspired John Webster’s The Duchess of Malfi (1623) and learn more about ground-breaking texts such as Emilia Lanier’s Salve Deus Rex Judaeorum (1611), the first feminist publication in English.

One of the central figures of the English Renaissance, Christopher Marlowe is often seen as the wild-boy of Elizabethan literature. His turbulent life and violent death have prompted many comparisons with the radical hero-villains of his plays, from the blasphemous Doctor Faustus who sells his soul to the Devil in exchange for magical powers, to the love-struck King Edward II, undone by passion for his male favourites. For the first time, we’ve put online an infamous note from the spy Richard Baines, making damning accusations that Marlowe was an ‘Atheist’ with too much love ‘for Tobacco & Boies’. We’ll probably never know if these claims are true, but we’ve digitised many other items to capture the spiritual, sexual and political worlds that shaped Marlowe’s drama. 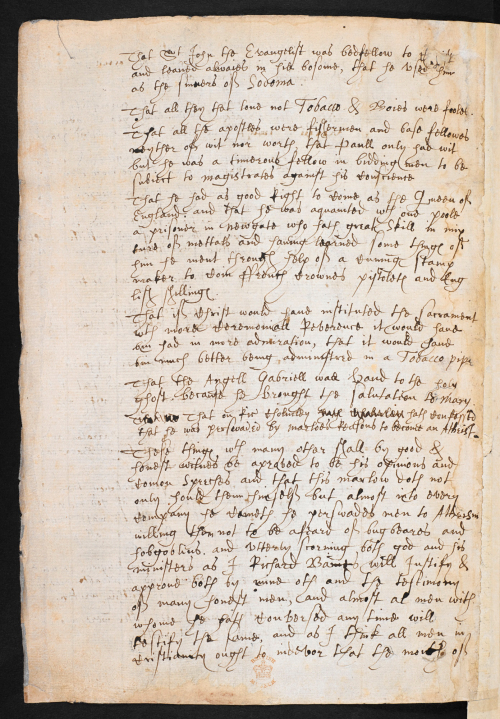 Richard Baines seems to take pleasure in characterising Marlowe as the most outrageous of atheists, Harley MS 6848, f. 85v.

Our section on Doctor Faustus shows the tension, in Marlowe’s day, between thrilling belief in magic and faith that God would punish anyone who claimed supernatural powers. An article by Eric Rasmussen and Ian DeJong asks whether the play condemns Faustus’s sin or relishes his superhuman ambition. There’s also a treasure trove of items relating to John Dee, the real Elizabethan magician who insisted that he had holy aims but was accused of sorcery. Dee’s handwritten guide to magic, De Heptarchia Mystica (1582) records his attempts to summon angels through his medium Edward Kelley. But there’s also a petition to James I (1604), in which Dee is forced to deny that he’s an ‘Invocator of Divels’. 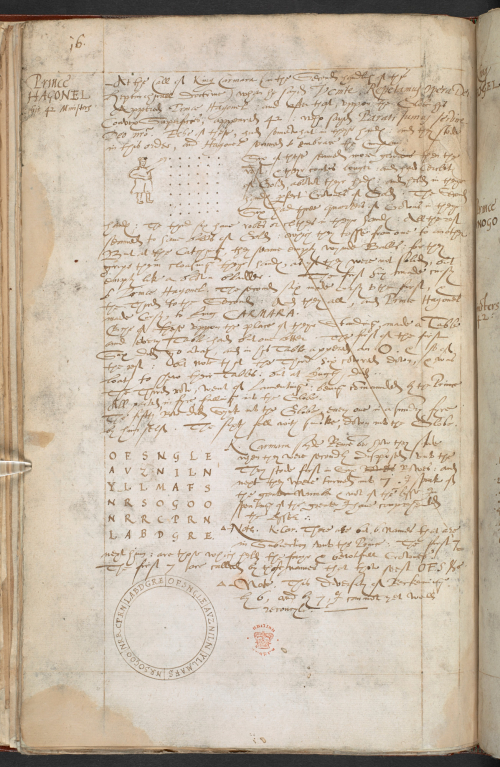 John Dee claims that Prince Hagonel appeared to him with 42 ministers, represented in the manuscript by seven rows of six dots, Sloane MS 3191, f. 40v.

The section on Edward II reveals the king as a focus for centuries of heated debate about same-sex love, homophobia, duty and self-fulfilment.  An illuminated manuscript, Jean de Wavrin’s Recueil des Croniques d’Engleterre (1471–1483), has a beautiful miniature painting of Edward’s marriage to Isabella of France in 1308, but the French text beneath it betrays the king’s love of his favourite, Piers Gaveston. Over five centuries later, Derek Jarman made his wonderfully eclectic sketchbooks for a 1991 film inspired by Marlowe’s Edward II. They show Jarman making connections between the tragic medieval king and his own experiences as a gay man in Margaret Thatcher’s Britain. 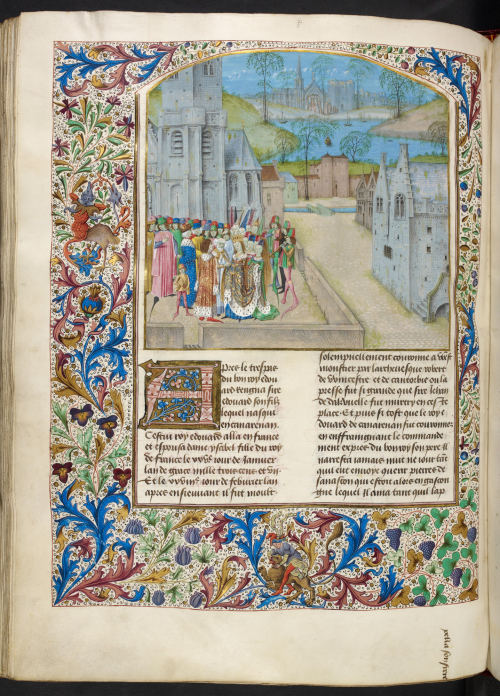 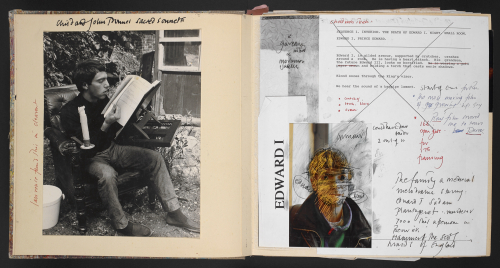 Like Marlowe, Ben Jonson didn’t play by the rules. Known to his contemporaries as a braggart, a drunk and a hothead, he had multiple run-ins with the law and served several stints in prison – once even escaping execution for murder because of a legal loophole. Jonson’s lived experiences, and his interest in the criminal underworld, are apparent in the shady characters that populate his city comedies Volpone and The Alchemist. The seamy underbelly of Jonson’s London is explored on the website through rogue pamphlets (the Renaissance equivalent to modern tabloid newspapers and gossip columns), which expose the various scams and deceptions of contemporary criminals and confidence tricksters. A Caveat for Common Cursetors (1567) is especially interesting because it includes a dictionary of criminal cant, or slang. 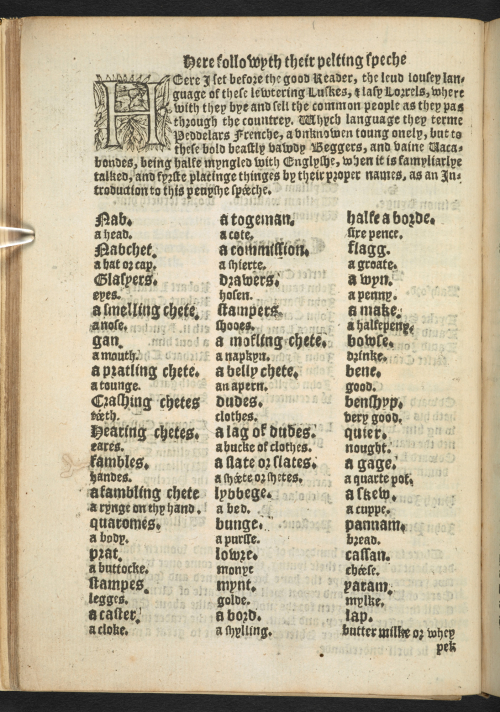 The confidence tricksters in The Alchemist dupe their (comically irksome and chronically unlikable) victims into ‘investing’ their money in an alchemy scam. In order to dig deeper into the scam, and understand alchemy as a serious scientific subject, we’ve published online for the first time images from a beautifully illustrated medieval manuscript, The Ordinal of Alchemy (1477). 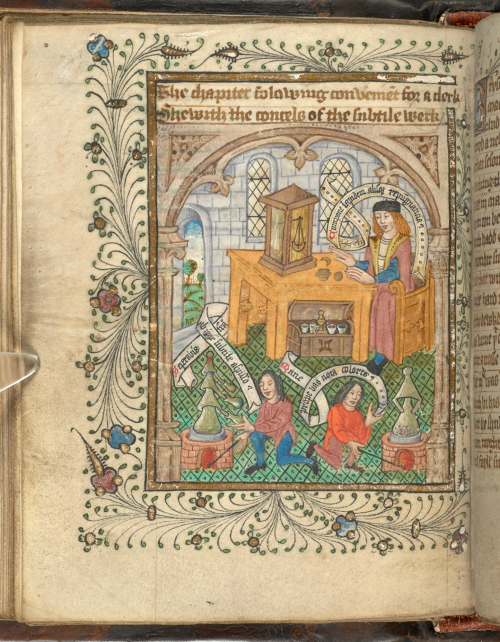 Also explored on the site are the ways in which Jonson, and other Renaissance poets such as Donne and Shakespeare, adapted literary conventions in order to create their own distinct styles. Volpone is a fusion of classical mythology, medieval morality and original Jonsonian comedic flair, which, when combined, created an innovative new theatrical form. Volpone borrows from works such as Aesop’s Fables, of which Caxton’s first English edition (1484) is digitised on site, as well as medieval plays rooted in religious beliefs, such as Everyman, in which vice and virtue go head to head for the audience’s moral benefit. 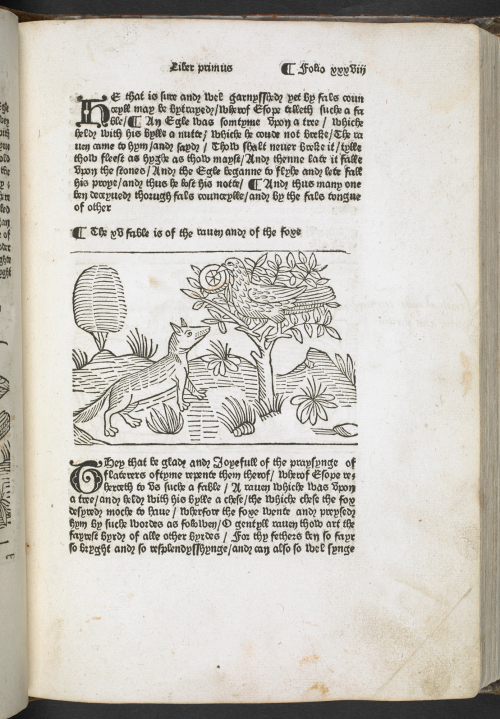 The fable of ‘the raven and the fox’, in Aesop’s Fables printed by William Caxton (1484), f. xxxviii

The rich collection of sources relating to John Donne reveals how his poems were changed by the different forms in which they were first read. His racy ‘Elegy: To his Mistress Going to Bed’ becomes all the more enticing when we know that it was banned from the first print edition of 1633, but included in private anthologies like the Newcastle Manuscript. At the same time, print seems to open up new playful possibilities for one of Donne’s most famous poems. In her analysis of ‘The Flea’, Aviva Dautch suggests how the third line, ‘Me it suck'd first’, is altered when the printed long ‘s’ looks exactly like an ‘f’.

The section surrounding John Webster’s blood-soaked tragedy The Duchess of Malfi, invites you to examine the role of women in Renaissance culture. Dympna Callaghan’s article ‘The Duchess of Malfi and Renaissance women’ places Webster's character in the context of contemporary drama, politics, and discourses about widows and female sexuality. Items connected to Mary Queen of Scots, Queen Elizabeth I and their close relation Lady Arbella Stuart present context, and contemporaneous inspiration, for the character of the Duchess - a powerful woman in her own right who nevertheless struggled to have it all: love, family and a career. 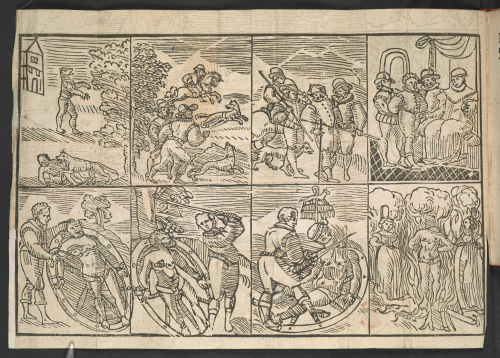 Werewolf pamphlet: The Damnable Life and Death of Stubbe Peeter, (1590).

The Renaissance Writers phase is the latest to be added to the broader Discovering Literature website, which will continue to expand in the near future to include literature from Beowulf to the present day.

Posted by Joanna Norledge at 10:37 AM