The writing of J. G. Ballard’s Crash: a look under the bonnet

Shock greeted the publication of J. G. Ballard’s Crash in 1973. Cult status quickly followed. Today, the novel is widely considered to be a modern classic, a novel that speaks both of its time – the darkening close of a decade of colourful liberation – and speaks dystopically to us today, connected yet disconnected as we are in a time of digital narcissism, detached 21st century voyeurs of pleasure and horror at the touch of a screen. Meanwhile, traffic increases – hurtling towards the limits of catastrophic systems failure – by road, and by what used to be called the information super highway. Is Ballard’s novel a Swiftian satire, a ‘cautionary tale’, as the author suggested, or is it, as he also characterised his novel – as if to evoke de Sade – a ‘psychopathic hymn’? Ballard maintained both positions at different times. The novel’s enduring qualities are connected to its moral ambivalence, an ambivalence that is deeply embedded in a richly layered text that resists closure.

There are two drafts of the novel in Ballard’s papers at the British Library, both revised and annotated, intensively so in the case of the earlier draft. This is how the earlier draft begins:

The first sentence of the typescript will remain unchanged (surely echoing the opening of Camus’s L’Etranger): ‘Vaughan died yesterday in his last car crash’. Ballard’s novel is a dark conjugation of its opening sentence. The sentence ominously suggests a series of (deliberate) crashes where we expect to read of a single accidental event. But the top left corner of the page, the note in black ink struck-through in red, is where the page as manuscript page begins, with the sketching of a generic setting for Ballard’s writing of the period, the Road Research Laboratory where V[aughan] works: ‘At the RRL at night with girl – they make love as he talks about V., among the wrecks’.

But neither the drafts nor the final form of words – where the text comes to rest, held in creative tension – exist purely, however distinctive, however novel the novel seems. So where did Crash spring from? What is the history of the text?  How is the novel connected to what came before? What else was Ballard writing during the same period?

I have just edited a new edition of Crash that tries to address these text-led questions by supplementing the familiar published text of the novel with generous selections of unpublished archive material. Crash: The Collector’s Edition (4th Estate, 2017) places the novel in its writing context. Five chapters in draft are set within the novel. In addition, there are selected stories – the predecessor ‘condensed novels’ – from The Atrocity Exhibition (1970), and Ballard’s two ‘surgical fictions’ (a mammoplasty for Mae West and a face lift for Princess Margaret). 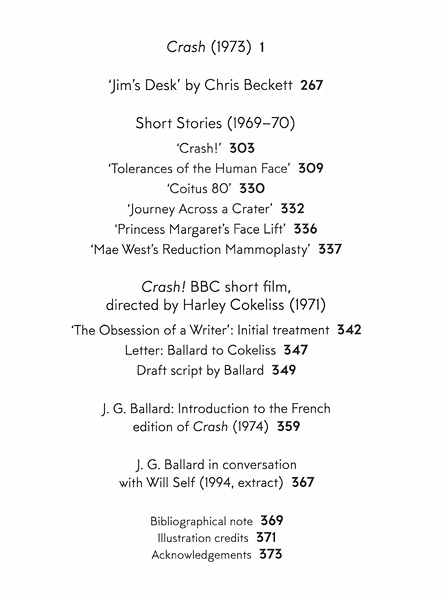 The new edition also publishes for the first time Ballard’s draft script for the BBC short film Crash! (broadcast BBC2, 12 February 1971), directed by Harley Cokeliss. Ballard appears in the film alongside a mysterious female figure (played by Gabrielle Drake) whose enigmatic presence punctuates the collagist visual essay. She appears and disappears, sometimes inside the car, sometimes in the middle distance. She gets out of a new car in a car showroom, then lingers among the car wrecks at the breaker’s yard. We see the contours of her body in the shower dissolving into the curved forms of a car body, and we see her slumped across a steering wheel, her face bloodied from a collision. The film was made (in the winter of 1970) between writing the first and second drafts of the novel. Its stylised visual language informs Ballard’s final text. The film is a bridgework that looks back to The Atrocity Exhibition (the following passage from the draft script is taken from ‘The Summer Cannibals’), and looks forward to the emerging novel:

The earlier draft of Crash is a remarkable document that conveys something of the intensity and the spontaneity of composition. The manuscript is layered over time by the strata of three-coloured revision: annotation-deposits in black and blue and red ink in the margins and over on the backs of pages. The inks codify the rhythms of writing and revision, rhythms that oscillate within the Crash manuscripts, from the drafts to the final text, and oscillate as well, as Ballard pursues his traumatised subject, in the cross-currents of his contemporaneous writing.

For further reading about Crash in draft, see Chris Beckett, ‘The Opening of Crash in Slow Motion’ on the British Library Discovering Literature site: https://www.bl.uk/20th-century-literature/articles/the-opening-of-crash-in-slow-motion

Posted by Joanna Norledge at 4:43 PM