To mark International Zines Day we have a guest post by Michael Nicholson about his 'bio auto graphic' series, recently added to the Library's collections.  The Library collects a very wide range of zines and other independent publications, and we are keen to raise the profile of zines in the Library.  Zines have real value for social and artistic research; they can be an inspiration to others looking to write or create their own publications; they can be a space for sharing issues and experiences where readers can find support; or they can work as part of a force for change, contributing to networks and activism. This post gives an insight into the context and motivation for producing the 'bio auto graphic' series. 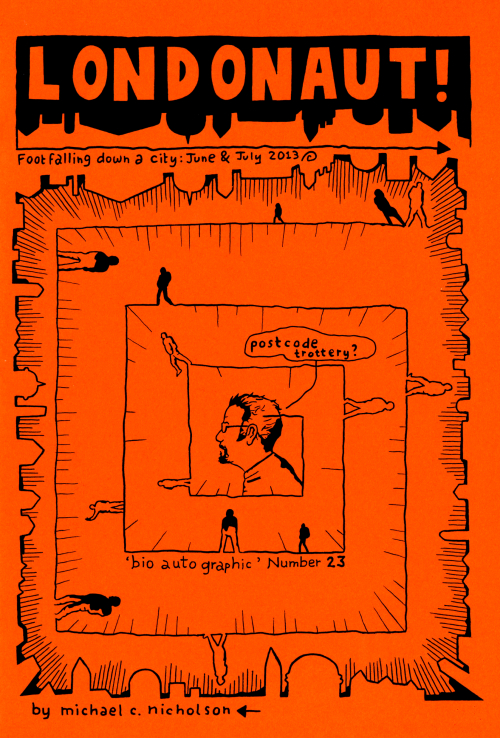 My name is Michael Nicholson and I draw pictures alongside words I write.

Since 2004 I have created an entirely subjective response to what I see and hear around me in the form of pictures and words, held in a series of self-published editions that many think of as zines.  The work – most recently collected by the British Library I am delighted to say – has been exhibited, collected and purchased around the world. People have said some kind things about it.

The tension between contradictory things gives the series energy; I grew up in the Lake District but chose to live in London; I trained as an illustrator but actually begin the creative process most commonly by writing; I relish company but also solitude.  The core fact of my life – that I am an only child – first allowed me to maintain a safety perimeter between my self and what I see around me. A blast-zone beyond which I am free to observe, assess and consider options before deciding on the right moment to step closer. I like time to think.

My imaginative life really began with books. The allure of storytelling hooked me very early, as I could read before I went to infant school.  Mere words in a certain order on a page carry an extraordinary potency, and the conventional book format – allegedly diluted by digital usurpers – remains elegant and profoundly interactive (to shamelessly appropriate a bloodless modern term).  Immersion in a new book, either in the company of a familiar author or while getting to know an unknown one, remains a delight.

I wanted to tell stories, having realized I could draw, and images – in the televisual age that was my 1960s childhood – then swirled around my head along with words. Simplistic notions of morality and relationships embedded themselves from a variety of sources: J.P. Martin’s exquisite, subversively English ‘Uncle’ series (illustrated by Quentin Blake) and the giddy Manhattan of Stan Lee’s ‘Marvel Comics’, to the spinning police box of Patrick Troughton’s ‘Doctor Who’ and the sinister hills and woods of Tove Jansson’s ‘Moominland’.  Well-crafted stories with characters to care about, whether they be in Milch & Bochco’s ’NYPD: Blue’, Phil Rickman’s excellent ‘Merrily Watkins’ series or David Mitchell’s ‘The Bone Clocks’, continue to involve me to this day.

What some regard as the dubious lowlands of popular culture always enticed me, and the irreverence of comedy in particular led me to the cheap seats. A sense of humour inspired me, whether it be ‘Monty Python’, Spike Milligan’s war memoirs, the bracing stand-up sermons of the late Bill Hicks or the current withering asides of Stewart Lee. Realising the absurdity of institutions, elites and ourselves - and pointing it out in ways that allow similarly helpless people to laugh at it - is an intelligent coping mechanism. Can laughter topple dictators? Comedy can be visionary, and those who do it wordsmiths and pioneers in my opinion, from Stan and Ollie to Jacques Tati and Tommy Cooper, Les Dawson and Victoria Wood.  Cruelty makes for easy comedy, but it’s the humanity in it that is most memorable.

All these factors shape me; how I see the world, how I step forward to meet it, how I step back to regroup after a blow.   How I phrase what I draw and write in ‘bio auto graphic’.  It was a challenge to tell the story closest to home, but humour helped.

Having worked professionally as an illustrator since graduating from St. Martins School of Art in 1985 – and also as a storyboard artist in TV and film from the early 1990s – by the 2000s I was ready to set out my own ideas instead of interpreting those of others.  It was time to act, in fact, and words as well as pictures would be my tools in doing so.

Having begun to exhibit early work at artists’ book fairs with my partner Mette Ambeck, I produced what I called ‘Issue Zero’ of a strand of editions based on my own life, an idea first suggested to me by a friend, comedy writer/performer Charlie Higson, in a serious moment.

I called the series ‘bio auto graphic’ (lower case, yes) and it was A5 size, produced from A4 artwork of inked pencil line and entirely hand-lettered, without colour. Two staples held an issue together. In this way it was positioned on a through-line from the simplest of medieval chapbooks to – though it was several years before I realised this – what are called ‘zines’ (these being the product of intense enthusiasm and low budgets, cheaply produced and direct in format).  Being the equivalent of a 17th century door-to-door chap book salesman appealed to me. I liked the sheer chance involved in some complete stranger coming up to the table and finding the work.

Stylistically, I adopted some of the conventions of my beloved childhood comic books (speech balloons and frames) but also drew vague influence from concrete poetry and the power of spoken language, overheard conversations, the beat and repetition of joke-telling, verbal double-meanings and the unsettling damp hand of our dreams.  The overall visual approach across the series to date is fluid, responsive to whatever the current theme is, loose enough to try new approaches in composition or format.  Pages lack the confinement of a dense field of ‘panels’, and narrative can be achieved via the creation of a cumulative mood rather than a strictly sequential ‘story’.

Whether in stand-alone issues, or in linked sequences, the editions explore all manner of threads; identity and how it changes; the things that bind and separate us as communities; being fictional or factual; the local and the global.  My mood obviously impacts upon what the reader sees, and the series can be variously angry, bemused, confused, sad, obscure and joyous.  It has certainly helped me chart the blind spots in what I think and who I think I am - and I gladly align it to the notion of the personal as the political.  I am in the process of identifying as myself. 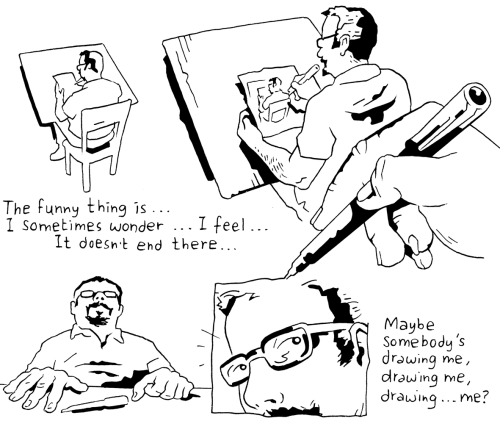 Hugely influential practitioners in this diaristic field exist, and my own influences certainly include Will Eisner, Robert Crumb, Art Spiegelman, Harvey Pekar, Eddie Campbell and Joe Sacco.  Of course, while this list doesn’t reflect it, the notion of strip artwork that draws from life – and zines reflecting it – has also been a strong thread through the recent decades of feminist thought.

The experience continues to satisfy, and there’s genuine anticipation and excitement when I begin to fill in a workbook page, not generally knowing where things will lead. Later the not knowing is replaced by the knowing as things are completed.

Am I merely navel-gazing? Quite possibly, but amidst the increasing velocity of our society I realize I am determined to fight a corner for a quiet reflective voice, away from the bear pit of anti-social media. I don’t have a faith in God, and science can sometimes reflect the hubris of humankind far too easily.

I do meanwhile have a faith in what best expresses our flawed state of being: small actions, gentle kindnesses, connections, hopes and occasional braveries, to which the series bears witness.

We are told what can make us happy every waking moment by the media-sphere – and usually at a price – but I suspect it is a lot simpler than that.

Look in the mirror and ask the person you see: ‘What makes you really happy?’

These editions that I make are zines, episodes in my life, a map, a window and a mirror.

If you said that ‘bio auto graphic’ is about finding what makes us happy, there might be some truth in that.