The tag line for the British Library’s Gay UK exhibition is ‘Love, Law and Liberty’. One could add another ‘L’ to the alliterative list and make the tag ‘Love, Law, Liberty and Literature’. Literature, and the way it has been used for and against the gay community is a revealing thread running throughout the show. The very first display case in the exhibition examines the downfall of Oscar Wilde and the way his novel The Picture of Dorian Gray – fit for ‘none but outlawed noblemen and perverted telegraph boys’ in the words of one reviewer – was used against him during his trial for gross indecency. Wilde himself realised he had gone too far in the original version of the story, published in Lippincott’s Magazine in the summer of 1890, and for the first novel publication in 1891 he rewrote the book. In the new version the passionate expressions of Dorian, Basil Hallwood and Sir Henry Wotton are recast in aesthetic terms, removing the original’s emphasis on male relationships. The damage was done though and in the eyes of the prosecution lawyers the Lippincott’s version revealed Wilde’s true, criminal, nature. He was, in their eyes, condemned by his own work. 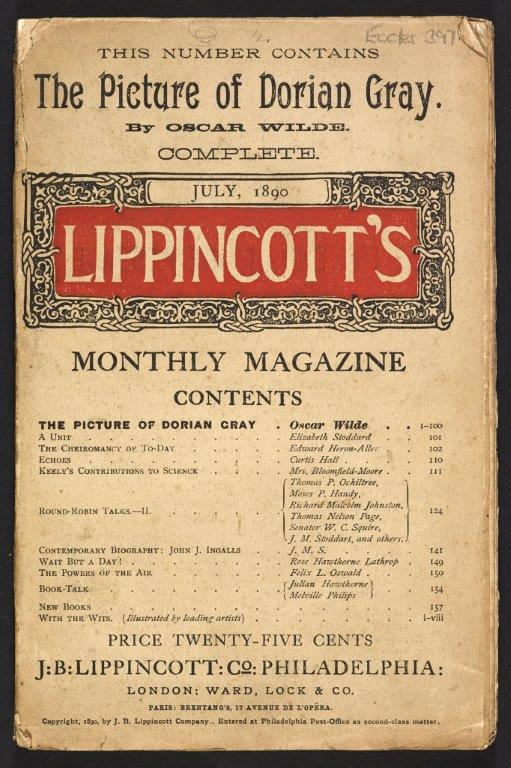 (Lippincott's Monthly Magazine, July 1890. The first appearance of Wilde's The Picture of Dorian Gray in print)

This need to either rewrite a novel, or to modify it in order to avoid moral outrage (or indeed to not publish it at all, as E. M Forster did with Maurice) is a common theme. Radclyffe Hall’s novel The Well of Loneliness (1928) was prosecuted for obscenity, and banned, almost as soon as it appeared. By today’s standards the novel is tame but the line ‘and that night, they were not divided’, which referred to two women, was enough to have James Douglas, editor of the Sunday Express, raging with disgust. He wrote: ‘I would rather give a healthy boy or a healthy girl a phial of prussic acid than this novel’. Further comments by Douglas made a direct link back to Oscar Wilde and the decadence that was a key part of the Victorian fin de siècle – ‘It is a seductive and insidious piece of special pleading designed to display perverted decadence as a martyrdom inflicted upon these outcasts by a cruel society. It flings a veil of sentiment over their depravity.’ The trial caused a sensation, with both sides being easy prey for satirists. 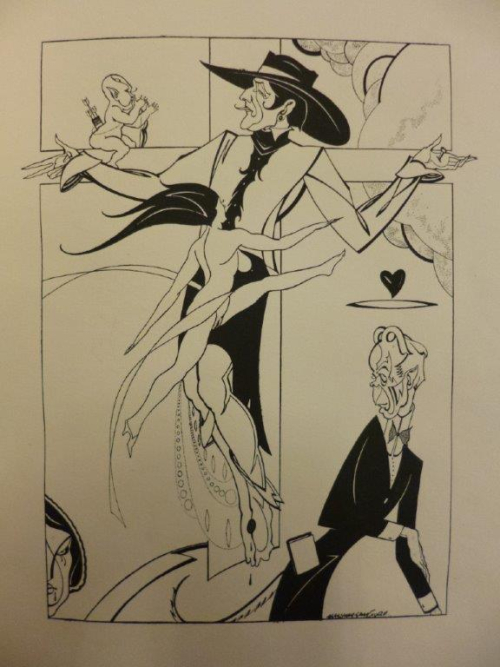 (An illustration by Beresford Egan for The Sink of Solitude (1928), a satire on Radclyffe Hall, her novel and the case brought against her book. Hall is being martyred on the cross; the Home Secretary Joynson-Hicks looks on; Cupid makes an insulting gesture and Sappho leaps joyously across the centre).

Perhaps Radclyffe Hall’s real offence was to root lesbianism in the English countryside, as much a fixture as the fox hunt and the Saturday-to-Monday house party. She drew attention to it and she defended it. Just as she pointed out and defended the fact that many women ambulance drivers on the Western Front during WWI had been lesbians. This was something a large part of the establishment did not wish to hear; it didn’t tie in with their old-style vision of muscular Christianity and their sense of order.

This open hostility towards literature that addressed gay life lasted well into the 20th century. Terence Rattigan conceived his play The Deep Blue Sea (1952) as a one-act piece revolving around a love affair between two men. Knowing this would never get past the censors however he had little option but to place a heterosexual relationship at the play’s heart if it was to be performed. A few years later however things were beginning to change. Following the publication of the Wolfenden Report in 1957, which recommended the decriminalization of homosexuality, and the subsequent rise in campaign movements and pressure groups such as the Homosexual Law Reform Society, attitudes were finally starting to relax. On 31st October 1958 the Lord Chamberlain issued a memorandum to his staff stating that plays about homosexuality, or including homosexual characters would no longer be subject to an automatic ban. The language of the document is grudging and of its time (“We will not allow embraces between males or practical demonstrations of love”) but all the same it was progress and plays like Shelagh Delaney’s A Taste of Honey (1958) soon brought sympathetic portrayals of gay men and women to the London stage. (Lord Chamberlain's memorandum from 31st October 1958 outlining what can, and what cannot, be permitted on the stage with regard to the portrayal of homosexuality)

Although the pace of change has been gradual the positive advance in attitudes over the twentieth century is encouraging. Seventy years after the banning of The Well of Loneliness Sarah Waters’ novel Tipping the Velvet (1998) achieved impressive sales and critical acclaim. A racy television adaptation was broadcast four years later. Waters’ novel is immeasurably more daring in its depiction of lesbianism than The Well of Loneliness. It is graphic, sexy, bold, joyous and brilliant. The fact it was also available to buy in high-street bookshops and to borrow from libraries up and down the country is indicative of how far attitudes towards same-sex relationships have progressed since the dark days of Oscar Wilde and Radclyffe Hall.

Gay UK: Love, Law and Liberty runs until 19th September 2017. The events programme to accompany the exhibition can be seen here.