On the 20th anniversary of Princess Diana’s death, the British Library is putting on display, for the first time, the original handwritten lyrics to Candle in the Wind. Following Diana’s death Sir Elton John, a close personal friend, asked his collaborator Bernie Taupin, to adapt the lyrics of Candle in the Wind, originally written as a tribute to Marilyn Monroe, to reflect the Princess’s life and death. The new version of the song, which opens with the line ‘Goodbye England’s rose’, was sung by John at Diana’s funeral, watched by an estimated 2 billion people. Here, Guardian journalist, Dawn Foster, provides a personal reflection on the memory and legacy of Diana’s death. 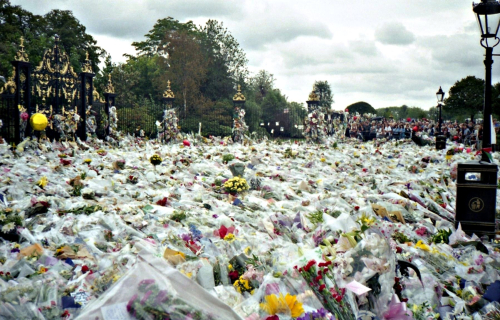 Flowers and tributes outside Kensington Palace after the death of Princess Diana, 31st August 1997

My mother woke us at 5am and said “She’s dead.” Hours later, when we came downstairs for breakfast, she was glued to the television. The next few days were an uneasy haze: news updates were delivered hourly as the public waited for details on how the crash had occurred and they scrutinised the reactions of the Royal Family. Crowds of mourners fed a sea of flowers, toys and trinkets that surrounded Kensington Palace.

Even at the age of nine it was clear immediately that the death of Princess Diana on the 31st August 1997 was an historic moment, not just in terms of the death of one of the most famous people on the planet, but culturally. Diana’s death raised questions about the media’s behaviour and approach to personal lives, the role of the Royal Family, and how British people saw themselves. Daily newspapers seemed dated when they failed to carry the most recent twists and turns of the mourning period: the public hunger for information birthed rolling news in a quick, makeshift fudge. Radio and television kept up with announcements and developments more swiftly than print could manage, and small snippets of news took precedence over the more contemplative and authoritative polished segments in news bulletins.

Coming shortly after New Labour swept to power in May of the same year, Diana’s death and the unprecedented public reaction to the tragedy signalled changing British sensibilities. Diana had become a public individual via her work on campaigns and charitable causes while the Royal Family remained distant authority figures. Deference to the Royals seemed outdated after the divorce of Charles and Diana. Many older friends told me women were emboldened by Diana’s decision to divorce and talk openly about the decision, showing that, even in the highest strata of society, it was becoming accepted that remaining in an unhappy marriage didn’t need to be the norm.

Her relationship with the gay community, too, signalled slow but growing acceptance of different sexualities in Britain. The British Library’s current exhibition, Gay UK: Love, Law and Liberty, charts the legal changes and cultural shifts that characterised Britain’s attitudes towards gay relationships - from open contempt and criminalisation to a begrudging acceptance - since the 1967 Sexual Offences Act partially decriminalised homosexuality following the recommendations of the Wolfenden Report ten years earlier. The exhibition includes a 2016 cover from the gay magazine Attitude featuring Prince William. Diana was both a pin up and a champion for the gay community, and it’s difficult to imagine the Attitude cover without her engagement with gay politics and people. Her work on HIV was part of a celebrity-led effort to increase understanding of the disease, in both prevention and destigmatisation: the fact she shook hands with HIV-positive patients was shocking to some at the time but was a deliberate decision to show prejudiced ideas about transmission were outdated, damaging and needed to be debunked.

As well as her charitable work, her famous friendships with gay figures were notable. When Sir Elton John asked his collaborator Bernie Taupin to rewrite the lyrics of Candle in the Wind to mark her death, he did so not just as a performer attempting to capture the spirit of a nation in mourning, but as a personal friend and confidante of Diana. Performing at her funeral, the mask of the performer slipped as he ended the song. John’s face, wracked with grief, became a conduit for the emotions of the nation. Anything could happen, and the moment felt unprecedented. It was clear a change was occurring in the wake of the tragedy and the cultural character and mores of the country were shifting.

The perceived reserve of the Royal Family in responding to Diana’s death and the gap between this and the news, celebrity responses such as John’s, and the public’s reaction were stark. John’s song - itself a cover, updated for the death of a close friend, emotional and heartfelt - chimed with the depth of public feeling for Diana and marked a change in British sensibilities which was here to stay. Posted by Joanna Norledge at 2:41 PM