Edward Lear (1812-1888) is best known for his nonsense verse for children, but letters recently acquired by the British Library (Add MS 89254) contain information about events in Lear’s real life, and demonstrate his letter writing capabilities. In 1873, Lear and his servant Giorgio Kokali ventured to India (partially for Lear’s health- he was suffering from bronchitis in a rainy London winter). They travelled the width of India and the length of the subcontinent, before settling in San Remo where Lear worked on his Indian commissions: ornithological and landscape paintings for Lord Northbrook. During this time, he wrote letters to his friend, Lady Mary Wyatt, wife of Sir Matthew Digby Wyatt, architect and art critic.

The period which these letters come from pre-date the financial insecurities which plagued Lear’s later years. These letters comprise correspondence pertaining to real events, for example Lear’s wishes that Lady Wyatt’s husband recovers from a minor illness, alongside a healthy dose of nonsense. One describes an ‘accurate history’ of the tale of 401 cows and 183 dogs. Upon hearing the cries ‘the 401 cows filled the ambient air with their laments… numbers of the cows not only shed tears, but that the little dogs actually dried their eyes with their tails’. The figures of the cows and dogs can be seen drawn on the letter in ink, in a similar style to the illustrations for Lear’s other nonsense works. 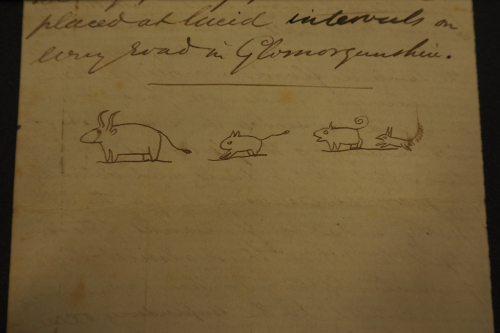 The letter from 24 January 1874 includes many puns, which Lear has underlined:

‘I shall send Digby no Delhineations of Delhi, not having been there- nor of Agra- for it would only Agravate him, & he would Be-neer-as happy as he was before… If you had but seen the Elephums & me ariding a top of one! (Which I would not do, as it was in the procession, & I thought it I might be sick just as I came up to the Viceroy)…’ 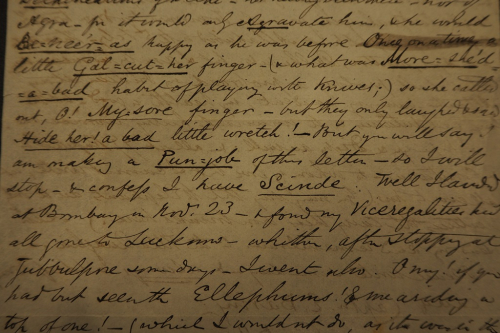 His nonsensical letters also reference Tennyson in relation to the chaotic community of 183 dogs and 74 calves, whilst punning on various words for cattle:

‘All at once the 183 little dogs by a Nimpulse, swam across the swollen flood, warbling in chorus the beautiful words of the poet, ‘Flow down cold revulet to the sea’ – &c &c, – till on reaching the 74 calves they seized their noses, ears, & tails, and… dragged the whole party to the shingly banks of the shore opposite where their almost despairing parients, cowed by their recent affliction and bullied by the impendious oxident which had occurred, were heiferlastingly stamping in the melancholy mud’. Whilst some may think these letters unreadable out of their original context, it is probably more enjoyable to embrace them as a case of the crossover between the Lear’s real life and his nonsense. They capture Lear’s delight in wordplay and nonsense, which span his works, both literary and epistolary. 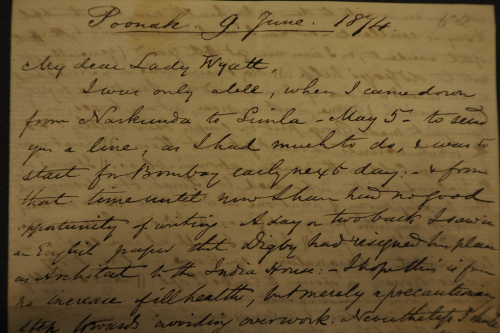 Posted by Joanna Norledge at 12:30 PM