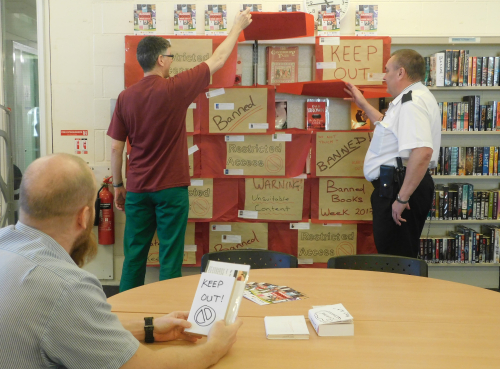 We are now putting the finishing touches to our displays and activities for Banned Books week. Our reading group will be holding a discussion around censorship and our poetry group will be delving into Roald Dahl’s Revolting Rhymes.

We have hidden books under cover and studded our shelves with 'banned' books in wrappers. This is our normal stock but people who have asked why we are wrapping them have been surprised when told the books have been banned - no one believes that Harry Potter could be banned but it has happened in some US states!

Word searches to find the titles of banned books will be available, together with bookmarks. Borrowers are going to be asked for comments with the intention of making a display as a follow up to the event.

We have also made links with our Safer Custody and Equalities team as many of the reasons that books are banned i.e. homophobia and racism, are issues that are being dealt with within the prison system.

As well as encouraging reading, it is hoped that discussing the censorship of books will open a dialogue about why people see banning as an option, about the the reasons why books have been banned and whether they are still relevant today. Challenges are faced by institutions like prisons; mental health, violence, gender identity issues and religious intolerance. By highlighting how these issues are used as excuses for challenging books we can hopefully break down some of the prejudices that are held.