‚ÄòI visited this play last night and endured two hours of angry boredom‚Äô; ‚ÄòA piece quite without drama and with very little meaning‚Äô. This was one audience member‚Äôs summary of the first London production of Waiting for Godot  ‚Äì now regarded as Samuel Beckett‚Äôs masterpiece of 20th century drama. This wasn‚Äôt, however, the opinion of just any regular audience member ‚Äì but an examiner for the Lord Chamberlain‚Äôs Office, which until 1968 examined and licensed all plays for public performance. Heriot was called on to review the play in production following a letter of complaint from Lady Howitt, who was appalled by the play‚Äôs ‚Äòlavatory references‚Äô (f. 8r) and wanted it banned. According to Heriot, audience members ‚Äòfled, never to return‚Äô ‚Äì except for ‚Äòa sprinkling of young persons in slacks and Marlon Brando pullovers with (according to sex) horsetails or fringes‚Äô. 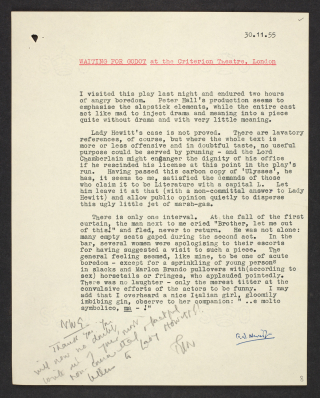 This is just one of the stories that you can find on the new 20th-century theatre phase of our free educational resource, Discovering Literature, which launched earlier this month. From production photographs of Shelagh Delaney‚Äôs A Taste of Honey to manuscript drafts of Harold Pinter's The Homecoming, the website draws on the British Library‚Äôs rich literary and theatrical archives to examine the work of 14 key dramatists. Aimed at A Level students, teachers and undergraduates, as well as the general public, this phase of Discovering Literature aims to show the developments and innovations on the British stage over the course of the century ‚Äì which saw playwrights and practitioners breaking new ground with the subjects and characters they portrayed, and the forms and styles they experimented with.

We‚Äôve digitised over 100 collection items, from manuscript drafts ‚Äì offering fascinating glimpses into the creative processes behind the plays ‚Äì to contemporary production photographs, reports from the Lord Chamberlain‚Äôs Office, reviews, posters and programmes, which help to shed light on the plays‚Äô cultural, historical and political contexts.

Highlights online for the first time include: 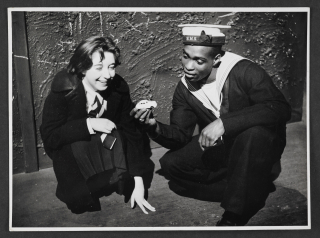 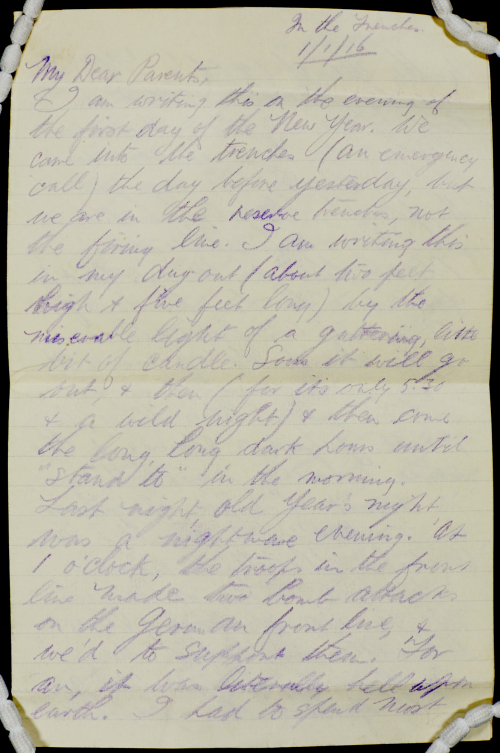 Alongside this digitised collection material, you‚Äôll find 40 newly-commissioned articles by leading scholars, critics, directors and curators. Michael Billington explores Oh What a Lovely War and The Birthday Party, Yvonne Brewster reflects on forming Talawa Theatre Company and producing The Black Jacobins, Jeanette Winterson writes on the impact of Shelagh Delaney and A Taste of Honey, and Dan Rebellato considers Look Back in Anger. We‚Äôve also covered influential theatre practitioners and genres, ranging from Brecht to, more recently, the work of Punchdrunk .

There are new interviews, too. We spoke with Max Stafford-Clark about directing Top Girls and Our Country‚Äôs Good at the Royal Court in the 1980s, and created film interviews with actor Murray Melvin, who reflects on his experiences starring in the original and ground-breaking Theatre Workshop productions of A Taste of Honey and Oh What a Lovely War. 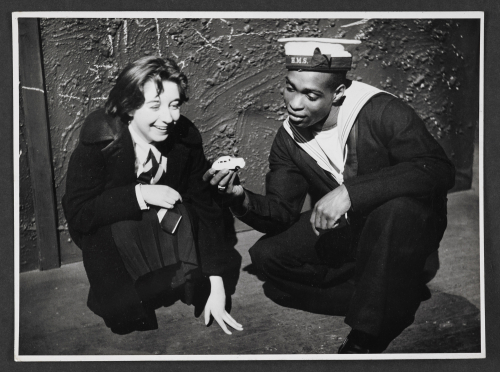 Lastly, teachers should also find our teaching resources area helpful. These downloadable resources offer a range of ideas for how to use the digitised collection items and articles in the classroom.

This new phase of material joins our existing site on 20th century poets and novelists, which went live in May 2016. Discovering Literature first launched in 2014, focussing on Romantic and Victorian literature, and the resource continues to grow, with the ultimate aim being to cover the backbone of English Literature from Beowulf to the present day ‚Äì and to use our collection to enrich the study and enjoyment of literature.

Posted by Joanna Norledge at 2:22 PM

A guest blog by Henry Woolf

A performance of Spider Love, based on a play by Mick Goldstein, adapted and arranged by Jeremy Goldstein, verse by Henry Woolf will take place at the British Library, Monday 16th October 18.00-20.00. 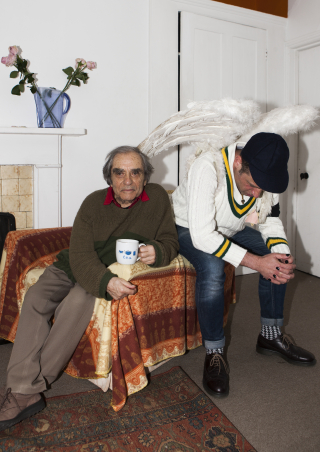 Writers are an awkward lot. When they‚Äôre dead they just won‚Äôt lie down. One visit to The British Library Archives in London will convince you of that. The words of these archived writers, assumed to be safely dead, fly off the page as fresh as a daisy, as warm as toast or as cold as ice but all as indubitably aliveas when they were first put down on paper. Death doesn‚Äôt necessarily have the last word. Thank heaven for the British Library archives which make these wonderful words available to anyone and everyone at absolutely no cost at all.

I feel all this very keenlywhen I visit the Harold Pinter Archive and re-read some of the hundreds of letters he wrote to myself and his other friends. He is still alive, forever, captured in the very pages that dropped through my letter box, his pages crackling with affection and energy.

Six of us including Harold and myself made up Harold‚Äôs ‚ÄòGang‚Äô We were friends for sixty years. I am the only one officially alive now. I wrote about us in The Guardian in 2008:‚ÄòA bunch of determined solipsists is how I would describe the six of us as we bowled about Hackney in the late forties and fifties our lives central to the workings of the Universe. We had mostly met at school encouraged by the shining example of our English teacher, Joe Brearley, to put our lives first and the world second‚Äô.

What does that mean?

Well in 1947 the world was too much with us; the Holocaust still loomed; atomic bombs had incinerated Hiroshima and Nagasaki; the Cold War was being manufactured to keep the American economy going. What lay in store for us looked pretty bleak. We could prove to be the last generation. No future. No children. Did we agonise over this? Discuss our unhappy fate in the small hours? Not a bit of it. By silent agreement we put the day-to-day world to one side. Once we breathed its infected breath we were goners.

If you want a glimpse of what we were like then, how particular, how different from each other and yet sharing a common language, a common stance, read Harold Pinter‚Äôs novel, The Dwarfs, written when he was twenty-two. He brilliantly captures young men in all their pride and peacock before society closes in and squeezes the life out of them.

All at once life has caught up with me. The past has stepped off the pages of my friends‚Äô letters and into the living breathing worldof a stage play by Mick Goldstein, one of our closest friends. The play was discovered after his death by his son Jeremy Goldstein who has since adapted it and turned it into Spider Love. It‚Äôs about Mick‚Äôs complicated life and his friendship with Harold and the rest of us. The British Library has generously encouraged Jeremy and a company of professional actors to present a rehearsed reading of the play on October 16th. Before the reading, Michael Billington the distinguished drama critic of The Guardian and Pinter‚Äôs biographer, will engage in a discussion about the play with myself, and in a moment of shameless self-promotion, at some point in the evening I shall be signing copies of my recently published memoir, Barcelona is in Trouble.

Jeremy's adaptation of Mick‚Äôs play includes myself as I am today at 87 (c. 2017) in the action of the play which takes place in 1975. A time traveller leading us to a Promised Land is not a bad description. I seem to represent the link between the past, present and future, and The Promised Land evokes the unknown fulfilment of the hopes, we as young men carried within us sixty years ago.

At first Spider Love seems a pretty straightforwardaccount of a man‚Äôs unhappy marriage and his own voyage of self-discovery. The play is lively enough, but one feels one has visited its territory before that is, until it dawns on us that everyone in the play not just Mick, is leading a double life. They too are looking for their own Promised Land of their imagination that was the unspoken promise of their youth.

Of course young people today have their own passionate views on life just as we had and feel the same energy and joy, but they express it differently and their approach to the world of politics that we all inhabit is much more straightforward than ours ever was. These days, young people are much more ready to speak up about their concerns than we were, and will confront what they consider to be the dishonest aspects of society, taunting their enemies with marvellous chants like truth to power which resonate with a wonderful confident optimism against the sleazy spin doctors we know so well today. We were much more wary of our shoddy, power corrupted world that was about to blow itself up.

Jeremy has kindly let me write some verse for the play as well as including some poetry that seems to marvellously capture its central theme. One of my favourite lines, and Harold Pinter‚Äôs too, is by the poet John Donne who wrote‚ÄòAt the four corners of the imagined world blow your trumpets angels!‚ÄôSurely we ourselves are the angels Donne is addressing as well as any supernatural beings that might be in the vicinity. The message is simple, there is more to life than the daily trudge at least for people like ourselves, the affluent few, who need only an economic surplus to release their imagination. On a much more jingle jangle level I wrote a verse myself on a similar theme:

‚ÄòWhat‚Äôs that drumbeat, what‚Äôs that thunder?
It‚Äôs the boys who‚Äôve gone down under,
Beating on the door of wonder
That never closed inside your creaking heart.‚Äô

It is places like The British Library with its archives and other collections that help keep the door of wonder open in all our creaking hearts. 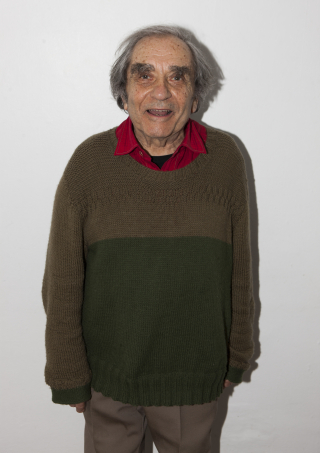 ‚ÄòSpider Love‚Äô is a new play forming part of an international art project inspired by the political and philosophical beliefs of Harold Pinter and his Hackney Gang. The play will be read at The Knowledge Centre British Library on 16 October, and from 8 November its companion project ‚ÄòThe Truth to Power Caf√©‚Äô tours the UK and internationally with Index on Censorship at Theatre in the Mill in Bradford. Devised by London Artists Projects

Posted by Joanna Norledge at 8:50 AM