Many know Aickman the conservationist, who dedicated much of his life to saving the British canal system and co-founded the Inland Waterways Association in 1946. But many also know Aickman the writer, author of 54 short stories, 3 novels, 2 autobiographies, numerous articles, and other works that remain unpublished.

His archive reflects all stages of Aickman’s literary career, from the very early days to his death in 1981. For most of his literary output, it is possible to see the different stages of Aickman’s creation process: a holograph manuscript, a corrected typescript and/or a final clean typescript. This makes the collection an invaluable resource for those interested in his writing technique and style.

Examples of his early writing include essays, plays and poems composed during his time at Highgate School (early 1930s), and many articles from the 1940s, when Aickman started writing theatre and drama reviews for the periodical The Nineteenth Century and After (he became their dramatic critic in 1945) and film reviews for The Jewish Monthly.

Aickman’s most popular creation are his short stories, or ‘strange stories’ as he preferred to call them - the term ‘ghost stories’ he thought ‘unsatisfactory’. Fifty-three of them are included in the archive (the one missing is Ringing the Change), as well a few unpublished and unfinished stories.

In addition to his two published novels and autobiographies, the British Library holds manuscripts of Aickman’s only unpublished novel entitled ‘Go Back at Once’, written in 1975, and his philosophical work ‘Panacea’, which Aickman wrote in 1936 but never succeeded in getting published. 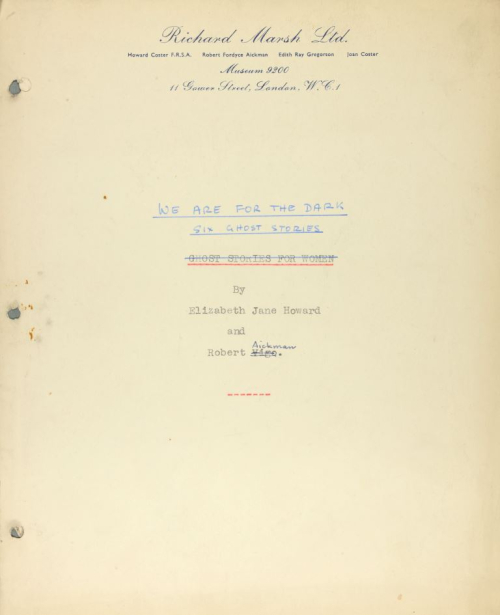 Title page of We Are for the Dark, Aickman’s first collection of stories, with Elizabeth Jane Howard, 1951. The working title 'Ghost Stories for Women' and Aickman's pen name Robert Vigo are crossed out - Add MS 89209/1/70 Reproduced with the kind permission of the Estate of Robert Aickman

Aickman’s work as editor is also reflected in the archive: typescripts of his first collection of stories We are for The Dark, produced in collaboration with Elizabeth Jane Howard and published in 1951, and 8 more collections, some of which were never published. Most notably, Aickman edited The Fontana Book of Great Ghost Stories from 1964 to 1972. 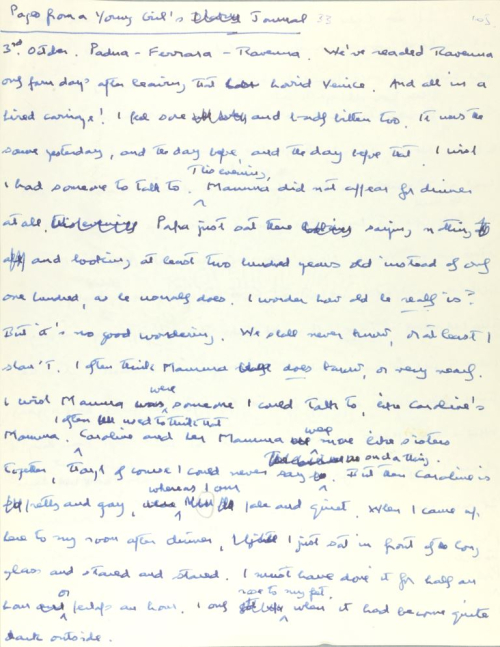 The collection also includes the author’s literary correspondence, which provides fascinating insights into his creative mind and his views on writing. Aickman kept carbon copies of most of the letters he wrote (on bright pink paper). Amongst others, he corresponded with many fellow authors from the U.K. and the U.S., including Lady Cynthia Asquith, L.P. Hartley, Ramsey Campbell, T.E.D. Klein, and Russel Kirk. 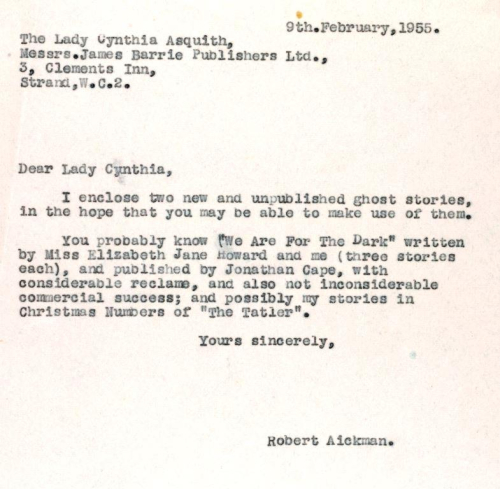 Letter from RA to Lady Cynthia Asquith (at James Barrie Publishers) sending her some of his stories, 9 Feb 1955 - Add MS 892092/4/36 Reproduced with the kind permission of the Estate of Robert Aickman

Large part of Aickman’s correspondence is with his American literary agent, Kirby McCauley, who became his good friend and great admirer. McCauley successfully got some of his stories published in the United States, by Charles Scribner’s Son.

In the U.K., Aickman was initially represented by Herbert (Bertie) Van Thal who wrote to him in 1963 after reading his story Ringing the Changes. According to Felix Pearson, Aickman’s literary executor, this was the turning point in his writing career: Aickman sent his novel The Late Breakfaster, previously refused by many publishers, to Van Thal who managed to get it published in 1964.

Aickman’s personal correspondence includes letters from Lord Douglas, who he met in 1941, Peter Scott, who was involved with the Inland Waterways Association, and actress Margaret Rawlings.

A smaller portion of the archive contains papers relating to the literary agency which Aickman named Richard Marsh Ltd., in honour of his grandfather, author of the supernatural novel The Beetle (1897). Aickman set up the agency in 1944 with his wife, Edith Ray Gregorson, who left her job at the World Press Feature agency and took some of the clients with her, including the caricaturist and cartoonist Victor Weisz, known as Vicky. Partners in the agency were also photographer Howard Coaster and his wife.

There are also family papers in the collection, which include some correspondence of Richard Marsh, typescripts of some of his short stories, and part of the holograph manuscript of his novel The Beetle. The posthumous papers included in the collection are helpful in understanding how Aickman was viewed by his friends and colleagues.

If Aickman the writer was perhaps not sufficiently appreciated during his lifetime, his archive opens up many opportunities to bring back to life some of his best stories and the man who was behind them.

Posted by Joanna Norledge at 3:03 PM