Marking the centenary year of the death of the poet Edward Thomas.

Edward Thomas believed poetry to be the highest form of literature, yet it wasn’t until late in his life that he became a poet. For the greater part of his creative life he was a reviewer, critic and the author of a number of books on nature.  He was born on the 3 March 1878 in Lambeth to Welsh parents who instilled in him a strong sense of his Welsh heritage.  He was educated at St Paul’s School and then Oxford University. In 1899, while still an undergraduate, Thomas married Helen Berenice Noble, the daughter of an early mentor, James Ashcroft Noble, who had encouraged Thomas to publish essays based on the copious notes he took on his long country walks.  After Oxford, Thomas made a precarious living working as a reviewer on the Daily Chronicle much to the dismay of his father, who had hoped his son would follow in his footsteps by joining the Civil Service.  Thomas’s determination to earn his living as a writer was to cause a major rift between father and son. 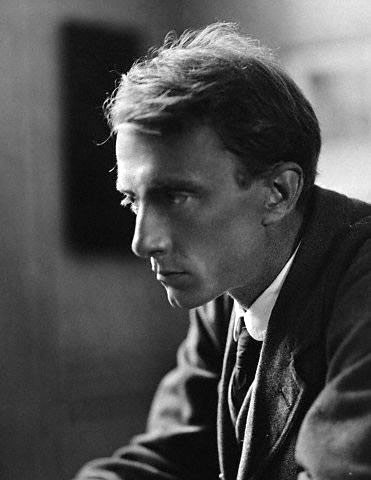 In order to support his growing family Thomas had to take on more and more reviewing – leading him to declare to a friend that “I am burning my candle at three ends”, despite his dislike of what he referred to as his “hack work” he became a prominent and influential literary critic. It was through his growing status as a reviewer that Thomas became acquainted with Harold Monro, whose Poetry Bookshop was the centre for an emerging group of poets who became known as the Georgian Poets. The key members of the group at the time were Lascelles Abercrombie, W W Gibson, Rupert Brooke and John Drinkwater.

In 1911 Abercrombie moved to ‘The Gallows’ a house at Ryton, just outside the village of Dymock in Gloucestershire; he was soon followed to the area by Gibson who, with Abercrombie, persuaded the American poet Robert Frost to move to a house in Ledington called ‘Little Iddens’. The three of them formed what became known as the Dymock triangle.  The Dymock colony is looked back on today as an idyll, a short-lived golden time, brought to an end by the First World War.

Thomas first met Frost in October 1913 and was subsequently a frequent visitor to ‘Little Iddens’, often staying with Frost until he too rented rooms for his family in a nearby farmhouse. Other visitors to Dymock included Rupert Brooke, John Drinkwater, Eleanor Farjeon, Ivor Gurney and W H Davies.  Thomas’s friendship with Frost was to prove a pivotal moment in Thomas’s life.  The two men would go for long walks in the surrounding countryside discussing poetry and life.  Frost has been credited as the catalyst in Thomas becoming a poet.  He suggested that Thomas take his prose and turn it into poetry. In the final two years of his life, Thomas was extremely prolific, writing over 140 poems.  One of his most famous is ‘Adelstrop’, written on the 24 June 1914, on a train journey to visit Frost.  The poem recounts an unscheduled stop that captures a moment of peace and tranquillity on a summer’s day, which later took on an extra poignancy for those about to be slaughtered in the coming war

There has been much speculation as to why Thomas enlisted in the army. Certainly we know he spent many hours deliberating over whether he should join up.  As a married man in his late thirties with three children to support he would not have been expected to enlist.  But enlist he did, on the 19 July 1915 as a private in the Artists’ Rifles.  A little over a year later he was promoted to corporal and worked as a map reading instructor, an occupation for which he was entirely suited and a position he could have retained for the duration of the war.  Ironically, it was the army that gave him the freedom to write, free from the financial worries of how to provide for his family.  In November 1916 he was commissioned into the Royal Garrison Artillery as a second lieutenant, the following month he volunteered for active service.

Thomas arrived in France a few months before the commencement of a major Allied offensive, aimed at breaking through the German defences at Arras. The day before the battle, a shell landed near Thomas but failed to detonate.  That evening he was toasted in the Officers’ Mess for being blessed with luck.  The battle began on Easter Monday 9 April 1917, within the first hour Thomas was dead.  Some biographical accounts suggest he was killed by the concussive blast of a shell which left his body unmarked.  However, a letter from his commanding officer, which lay undiscovered in the New York Public Library for many years, reveals that he was killed by a direct hit through the chest.  The poems that were to make his name were published a few months after his death.

Perhaps his work has been overshadowed by the dominance of modernism, but many poets point to Thomas as an inspiration and he is seen by some as the bridge between Thomas Hardy and Ted Hughes. Hughes described him as “the father of us all”.  On Armistice Day in 1985, Hughes unveiled a memorial to First World War poets in Westminster Abbey, which included Edward Thomas among those commemorated.