For those who believe in magic it’s reasonable to accept it can form in monochrome shades. Potentially the most infamous practitioner of the darker variety was Aleister Crowley (pictured below). Emerging from the Fin de siècle moment when, along with philosophers and psychoanalysists alike, he became interested in mysticism and the occult. Rebelling against his evangelical Christian upbringing causing his mother to dub him ‘The Beast’ a moniker amongst many he would adopt throughout his life as a magician. 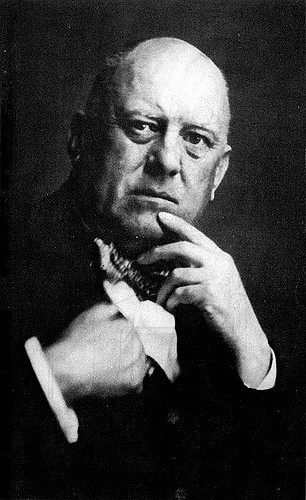 Crowley began his magical apprentice training with the Hermetic Order of the Golden Dawn, other probationers included W.B.Yeats. Crowley however, developed an interest in goetia- the evocation of demons and would later believe Yeats was casting spells on him because he was jealous of his poetry… The clandestine life style Crowley was beginning to indulge in encompassing drug taking and sexual experiments cast a cloud over his progress with that magical order prompting him to seek wider magical landscapes.

He travelled extensively and studied a myriad amount of ancient eastern traditions from yoga, meditation to kabbalah. He married and shortly after in telepathic communication with his new wife made contact with the Egyptian god Aiwass, which resulted in him producing The Book of the Law which would serve as the basis for the magic system he dedicated his life to. The premises of his belief system was ‘Do What thy Will, Love is the Law’. Analogous to Nietzsche before him he believed that individuals held the power to be free and live according to their own desires, despite the effect of those desires. Having achieved top level magus status Crowley became head of Ordo Templi Orientis (O.T.O.) he added a ‘k’ to the spelling of magic and set about establishing the religion of Thelema that would guide in the new Aeon.

One vital element to Crowley’s practice was the attainment of a magic diary. He had a strong interest in science and felt that magic should use the ‘method of science with the aim of religion’. In the age of enlightenment knowledge received by reason could be scientifically calculated. The practice of magic for Crowley had to be studied in the same manner; collect data and look for repeatable patterns and repetitions. The diary was key to this procedure.

He kept a diary from his initiation into the Golden Dawn and expected all his students to do likewise. The process of keeping a diary was to record and reflect on experiences and effective exercises. The recording allowed theories and methods to be tested but also a tool to aid his most profound motto; know thy self and ones limits.

He chronicled everything in his diary, from Astrological charts, concentration exercises, dreams, daily observations to what he ate and when. The resolution was to show life as a spell that is willed for a purpose. Evocations were his way of confronting obstacles to the self. By recording all his thoughts, feelings and activities and the reflecting upon these illuminated his perceptions. The practice of keeping the diary was a disciplined aspect of training for the aspirant. The diary would be maintained for a year then reflected upon by the teacher before a pupil could become adept. The principle was for the magician to record their past, where they came from and how they were brought to the gateway of magic. The diary would function as the writer’s conscience that could be used for further experiments. The recording of all activities meant that the mind could not forget or falsely remember.

Sometimes coded cipher might be used, and grammar was banished. There would be no full stops, or use of the word failure Crowley writes in The Book:

“This full stop may never be written anywhere else; for the writing of the Book goes on eternally; there is no way of closing the record until the goal of all has been attained.”

Magicians diaries rarely survive least of all become published, the full set are still waiting publications. John Dee who was the astrologer of Elizabeth 1 also kept a magical diary. Some of his original manuscript form part of the British Library collections.

Aleister Crowley had many faces, an iconoclast, a poet, a mountaineer, a mystic and popular culture icon. His cultural influence began as early as 1908 when Somerset Maugham wrote The Magician a novel caricaturing Crowley. During the revolutionary 1960’s Crowley would posthumously become an alternative inspiration for the new generation from magicians to pop stars. It seems that the subterranean world of the magician is an enduring mystery that looks set to remain in our popular consciousness for a long time to come. Just remember magic isn’t just one colour…

References books on magic can be located on the open shelves in Humanities one reading room.

Posted by Joanna Norledge at 10:53 AM