by Silvia Gallotti, Manuscripts Cataloguer at the British Library currently working on the Michael Palin archive. The archive, which has been generously donated to the British Library by Palin, covers his literary and creative life during the years 1965-1987 and will be available for the public to consult in the Manuscripts Reading Room from spring 2018. 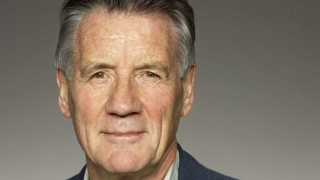 During a dialogue between Pontius Pilate and his centurions in Monty Python’s Life of Brian (1979), Pilate dares his men to have a ‘little giggle’ at the name of his ‘fwend’ [sic] named ‘Biggus Dickus’ in Rome. Their attempt to stifle laughter is finally thwarted when Palin’s Pilate, in full Roman regalia, tells them the name of Bigus’s wife – Incontentia Buttocks.

When reading drafts of Palin’s early sketches written for The Two Ronnies, The Frost Report, or Do Not Adjust Your Set or when delving into notebooks and scripts for The Monty Python’s Flying Circus, The Holy Grail or The Life of Brian, it is impossible to resist a ‘little giggle’ or even, sometimes, to burst into uncontrollable laughter like Pilate’s centurions.

As well as being a singularly valuable source of inspiration for new generations of comedians, writers and actors, Palin’s archive is also as entertaining as his finished work. The material not only reflects each stage of his creative process – from initial ideas, conceptualization, planning and organising to drafting and final revisions – but it also illustrates all the different phases of TV and film making, from pre and post-production to publicity and distribution.

Palin organised his papers in files, each relating to a TV, film or literary project, spanning from his early career to his later performance in A Fish Called Wanda (1988). The files (all 200 of them) are currently being catalogued and include research material, notes, drafts, correspondence, scripts, call sheets, shooting schedules, financial statements, photographs, advertising posters, press reviews, distribution reports, and more. Showcased below are just a few examples of the material found in the archive related to Palin’s TV projects and films, ranging from early drafts to publicity ideas.

The Frost Report was a comedy show produced and broadcast by the BBC, hosted by David Frost and written by comedians including Michael Palin, Terry Jones, Marty Feldman, Ronnie Corbett and Ronnie Barker. The first episode was released on 10 March 1966. Each episode, presented by David Frost, covered different topics, such as education, love, money, trends.  Above is a draft of a comedy quickie written by Palin probably for the ’Frost Report on Leisure’. It is one of the numerous early drafts of sketches included in the archive, some of which were never used. 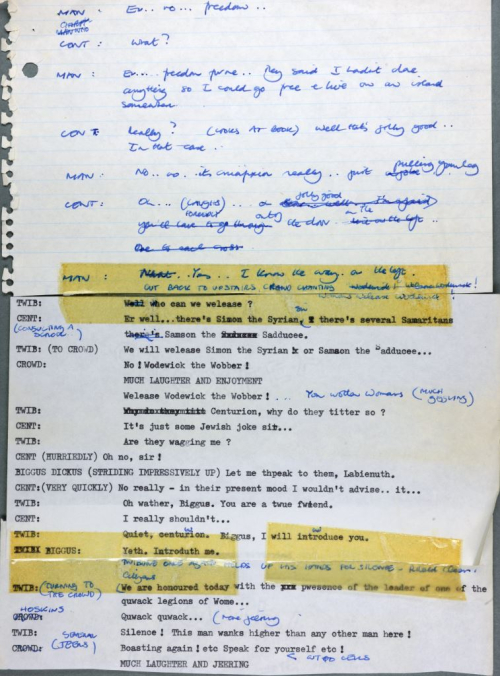 Page from a notebook used in the production of Monty Python’s Life of Brian, 1976-1977

Life of Brian was Monty Python’s third film, after And Now for Something completely Different (1971) and The Holy Grail (1975). Directed by Terry Jones and financed by George Harrison, the film caused controversy among some religious groups upon its release. Cinemas in Ireland, Norway and many UK cinemas banned the film, which was nevertheless a huge success elsewhere.

The above page comes from a notebook with Palin’s notes and drafts for the film. It is a draft of the scene where Pilate, Biggus Dickus and the centurion appear on the balcony in front of the crowd to announce the release of a prisoner. The combination of holograph manuscript and typescript clearly illustrates Palin’s editing process through which pages have been cut out and pasted back together in a different sequence.

Schedule for ‘The Entire History of England’, 24 Sep 1968-10 Jan 1969 from the TV sketch show series The Complete and Utter History of Britain

The Complete and Utter History of Britain was a six-part series written and performed by Michael Palin and Terry Jones. Produced by London Weekend Television, it was broadcast between 12 January and 16 February 1969. Above is a schedule for the show, handmade by Palin, with dates for rehearsal, filming and viewing. ‘The Entire History of England’ was the provisional title of the show. The archive includes other examples of shooting schedules as well as camera scripts for Monty Python’s shows and Palin’s films.

Ripping Yarns was a television comedy series written by Michal Palin and Terry Jones. It ran for 2 series (8 episodes in total) and was broadcast on BBC from from October 1976 to October 1979. The sign above was made for the episode ‘Across the Andes by Frog’, directed by Terry Hughes and aired on 17 October 1977. The story had first appeared in Jones and Palin’s humorous book Bert Fegg’s Nasty Book for Boys and Girls (1974). 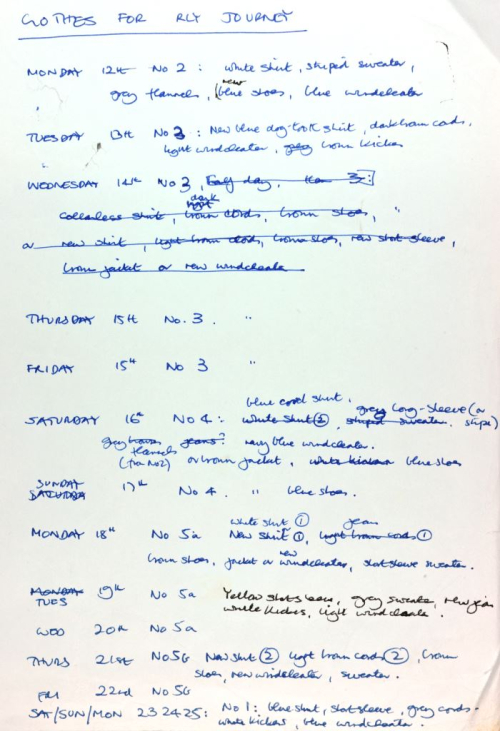 List of ‘Clothes for Rly Journey’ – Great Railway Journeys, May 1980

The above page is from a notebook is related to Palin’s first engagement as a TV presenter. A lover of trains, his episode of the series Great Railway Journeys was entitled ‘Confession of a Trainspotter’ and documented his journey from London to the Kyle of Lochalsh. It was filmed in May 1980 and this is Palin’s handwritten list of the clothes to take on the journey. 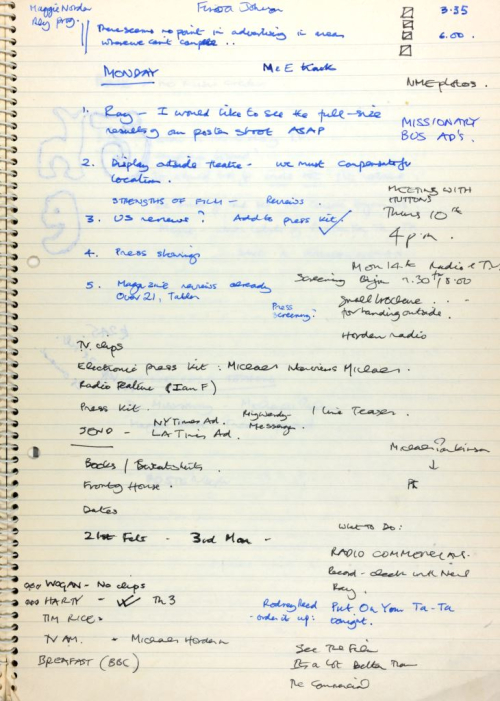 Michael Palin is writer, lead actor (with Maggie Smith) and co-producer of The Missionary, film directed by Richard Locraine. His first film produced and performed without any of the Pythons, it was released in the U.S. in November 1982 and in the UK in January 1983. The notebook includes Palin’s notes about the publicity campaign and cinema openings in the UK, including drafts of commercials. This page gives an insight in Palin’s work at the publicity stage of film-making, with his notes for advertising posters and radio commercials.

These items give just a small glimpse of the prolific and multifaceted career of one of Britain’s most loved figures.  We hope that being able to see all of this material for the first time will provide an insight into the history of show business and inspiration for future researchers and practitioners alike.  Palin’s influence is felt across disciplines, and access to his archive stands only to widen and deepen this influence.

All images reproduced with the kind permission of Michael Palin.

Posted by Eleanor Dickens at 2:08 PM