by Callum McKean, Curator of Contemporary Literary Archives and Manuscripts. This month the Library is running a series of events under the name China in Focus with speakers from a number of disciplines related to the study and appreciation of China and diasporic Chinese communities. All material referenced in this blog post is available to consult in our Reading Rooms, either online or in person.

On February 18th London will become witness to a spectacle. The already loud and luminescent streets of Soho will shine even brighter and shout even louder than usual, as hundreds of thousands of people descend to usher in the Year of the Dog. Fantastical creatures will wind their way down Charing Cross Road – roaring past its rare and vintage book shops – towards Gerard Street – with its bilingual street signage and open-door all you can eat Chinese restaurants – down to Trafalgar Square, where an 18th century vice-admiral will look on with bemusement as the stage is set for the evening’s eclectic performances of music, dance, acrobatics and spoken-word. This is London at its most forward facing and outward looking; a city profoundly aware of its status as perhaps the most international city in the world; a city which understands a dynamic multiplicity of identities to be its singular identity, all contained in the all-encompassing and many-sided concept of the Londoner. 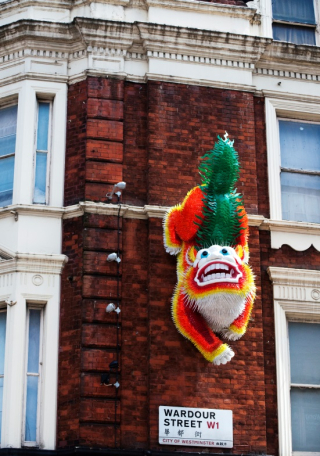 But the history of the Chinese diaspora in London didn’t begin with this West End spectacle, nor did it even begin in the little group of neon-lit streets which we now call Chinatown, bounded informally by Shaftesbury Avenue in the north, Rupert Street to the west, Charing Cross Road to the east and Leicester Square to the south. Instead, the history of the Chinese diaspora in London begins further east, in the now regenerated Docklands where – under the shadow of Canary Wharf’s glistening glass-towers and luxury apartment blocks – little remains of the old Chinatown which formed around the Limehouse Causeway and Pennyfields in the late nineteenth and early twentieth centuries. This small assortment of specialist shops and meeting places which was built to serve the transient population of Chinese sailors working the ships docked on the Thames  soon responded to the growth of the London docks by becoming a fixed settlement, almost doubling in terms of its fixed population from 1901 to 1911. (Although it is still important to note that the numbers remained very small in actual terms, growing from just 55 men to 101 registered in the census data). 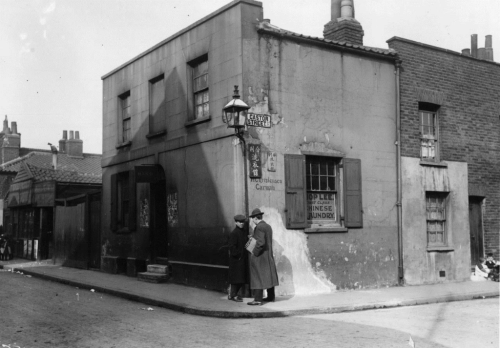 Two men meet outside a Chinese laundry on the corner of Caston Street, Limehouse, c.1917

In an already highly cosmopolitan district the Chinese remained a minority, but a highly visible one, attracting disproportionate attention from reporters and fiction writers who went to London’s East End hoping to experience the exotic mystery and romance of the Far East. Fiction writers like Thomas Burke in Limehouse Nights (1916) and Sax Rohmer in Tales of Chinatown (1922) set the tone for journalism in the period. In their work the industrial slum of Limehouse became an inscrutable and ingenious façade, behind which something mysterious or violent always lurked -- just out of reach. With very little material evidence to go on, these writers began to construct fantasy worlds out of the basements, attics and back-rooms of the neighbourhood: every business became a front; every drab house-front concealed rooms full of exotic and luxurious ornamentation; every interaction was littered with secret codes and by-words; and every foggy alleyway cloaked a shady scheming figure, ‘fading into a dimly seen doorway in a manner peculiarly unpleasant and Asiatic’ (Rohmer, Tales, p.56 [shelfmark: NN.7917]). 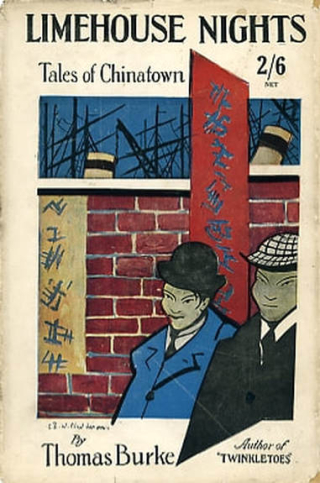 In this imaginary landscape ideology and topology merged into one foggy symbol. The ordinariness of the district itself was no match for this logic – perhaps even working in its favour to deepen the sense of scandal and intrigue with every perceived evasion or near-encounter. Each time the real Limehouse failed to deliver the goods, the fantasy Limehouse was pushed further and further back into the unreachable parts of the tenement houses and restaurants, which would need to become positively labyrinthine in order to accommodate the ever more complex patterns of organisation and depravity which writers like Rohmer and Burke were obsessed. (Rohmer’s own Fu Manchu character is in some sense the epitome of this process; the physical embodiment of nothing less than a world-domination conspiracy, hatched in a Limehouse cellar-cum-secret lair). Given this propensity for pushing back and building conspiracies, it is unsurprising that one of the most prominent and lasting tropes which emerges from narratives of Chinatown during this period is the idea of uncovering, unmasking and bringing to light that which was supposedly hidden, inaccessible and inscrutable. Reports from the Illustrated Police News repeatedly show raids on Chinese business and homes, focusing specifically on the act of breaking down doors and pulling up floor-boards to find hidden gambling and opium dens lying beneath and behind the hum-drum facades. 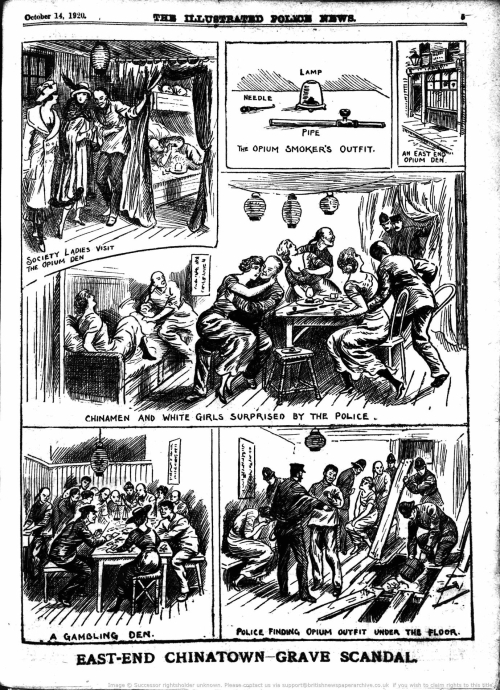 A page from the Illustrated Police News dated October 14th 1920 showing a police raid in Limehouse Chinatown. Thousands of digitised British newspaper pages are accessible through the British Newspaper Archive, which is available for free in the Library's Reading Rooms.

Contemporary Chinese writing in Britain has been forced to deal with this legacy in one way or another. Like many diasporic writers and their immediate descendants, an ability to write themselves so often depends, either implicitly or explicitly, on their ability to confront those who have so often written for them. Wasafiri magazine was founded in 1984 to provide a dynamic platform for contemporary international writing in this self-defining mode, featuring a diverse range of voices from across the UK and beyond, with an emphasis on diasporic writers. The Library acquired the magazine’s archive in 2016, and despite the its excellent output and considerable influence and reputation, when reading the correspondence related to the production of a 2008 Olympic special edition titled ‘Writing China’, it is striking how difficult the process of compiling, curating and translating for this single issue had evidently been for the editorial staff, even with their collective expertise. As Rana Mitter, the Director of the Oxford University China Centre, suggested in a recent lecture at the Library’s Knowledge Centre, titled simply China in 2018, even the most avowedly cosmopolitan among us often harbour grave misunderstandings about Chinese culture and politics. All to often some vital thing is lost in translation, either culturally or literally.

Yet when I read contemporary Chinese British writing I find myself more often in the exuberant and playful streets of Soho than in foggy Limehouse. A dual-language collection put out by Lambeth Chinese Community Association entitled Another Province (1994), as perhaps the first major selection of Chinese writing in the UK is, as much as Wasafiri's ‘Writing China’ issue, a good place to start. In this collection we find ourselves in familiar locales (restaurants, take-aways, and tenement houses) but now the rules have changed. In Lab Ky Mo’s cameo  titled ‘Dining Alone at Wong Kee Restaurant with Seven Men’, the touristic gaze is turned outwards, towards the white diners in the Chinese restaurant. Their peculiar habits and social defenses against the infamously abrupt waiting staff are deconstructed as Mo pokes fun at their mild suffering. The story is an at times caustic but always funny piece of mock amateur anthropology of the kind that journalists were taking much more seriously in Limehouse a century beforehand. Similarly, Lili Man’ turns the tables  by examining the body, and more specifically the face in ‘A Batty Metamorphosis’. If the Chinese faces in Limehouse tended to be described as repetitious and unreadable, Man takes the readability of the face as a given when a Chinese woman wakes one morning to find herself with golden hair and blue eyes, but rather than having her identity issues resolved, her confusion is amplified.

An excerpt from Pui Fan Lee’s Short, Fat, Ugly and Chinese (1992) is particularly revealing in this regard. Lee's play is a tragicomic monologue describing the experience of growing up as a young Chinese woman in the UK. The action tracks Lee’s narrator through her panoptic Nottinghamshire hometown where white residents repeatedly comment upon and speculate on her body, imitate her voice and – revealingly –attempt to get behind the counter of the take-away where she works after school in order to discover its ‘operations’. Eventually, Lee’s narrator escapes, leaving for University in London where – with a tongue in cheek idealism – she tells us, ‘No one looks at you in London. No one cares. It’s great’ (Another Province, p.192 [shelfmark: 98/10076]). Ironically though, this line is delivered first on a West End stage, where an audience of Londoners is necessarily compelled to look at her as she makes herself uncomfortably visible under the limelight. Perhaps the issue at hand here, then, as for much diasporic writing, is less about cultivating invisibility than about becoming visible on one’s own terms. The end of the excerpt in Another Province sees Fan’s narrator move again, this time from her drab tenement flat in Tooting to the uninhabitable but magical streets of the West End; from London as it is often lived to London as it is often felt – and wished – to exist; from the secluded and marginal to the performative and visible; from Limehouse to Soho. These spaces are still symbols, but she is now free to move around in them and make them her own. Finally free from the weight of ‘the reputation of the whole Chinese population on [her] shoulders’, Lee’s narrator can begin to tell her own story, and we can finally listen (Another Province, p.179).

Posted by Eleanor Dickens at 2:21 PM