Rachael Hand’s latest work Ash (2017) comprises of an edition of 15. Ash is constructed from digital print, laser cut card and an etched engraved cover assembled around a hand painted and bound core to create an artists’ book that plays with a form now almost ubiquitous to reading in the 21st century: the e-book reader.  The word Ash is a play on the word ‘Kindle’.

When Ash is handled it takes on another dimension. The raw materials are the same component parts that are used in the construction of a printed book, and now so finely and precisely assembled Ash actually fools the viewer.  When it is first taken in their hands its tactility tricks the handler by offering the sensation of holding buckram, a sensation commonly associated with holding a book.  On opening the cover, one is presented with, to all intents and purposes, an e-book reader. Ash is in fact a facsimile of an e-book reader. Though fingers are dragged across the “screen” and prod at the “button” in an effort to elicit some life from the card and cloth, the reader of the ‘reader’ will be disappointed. 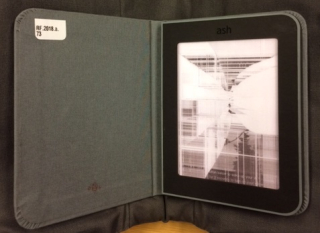 Hand's work is a reminder that, on the one hand, reading books on a “reader” can be a truly liberating experience. A weighty tome translates to a very portable light-weight object. Tight packed text and long paragraphs can be enlarged with a zoom tool and consumed a ‘mouthful’ at a time. Reference works can be stored weightlessly alongside the novel or poetry collection of the day. The typography of Amazon’s Kindle is mimicked in the spelling out of “Ash” and there is a surprisingly nostalgic aura to it, as if the future has already gone by. Yet, Ash also draws attention to the comfort of the printed page – the comfort of that tactility – and the beneficial slowness, sometimes, of the kind of reading necessary for traditionally produced books. It is a minimalist work, but also a rich ambiguous one. Ash was created as part of the AMBruno coalition of artists who all have been brought together by their common interest in the medium of the book. It is one of  fifteen new books made by sixteen artists in response to the subject brief [sic] (sic erat scriptum - thus was it written) to make a book in some way that is at odds with assumptions of what a book should be or do. The supporting literature describes the work by using a definition of ash which reads as follows:

“Ash n. powdery residue left after the combustion of any substance; remains of human body after cremation. A meditation on our relationship with objects in our current era, and the question of what we will leave behind.” 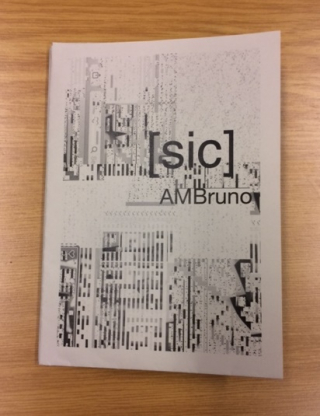 AMBruno is a coalition of artists, established in 2008 with MA Fine Art graduates from Central Saint Martins (part of University of the Arts, London), which has since widened to include artists based throughout the UK and internationally. Their project, [sic], is comprised of fifteen books, all diverse responses to various forms of reading and writing, now catalogued and available to Readers in the Library's Reading Rooms. Rachael Hand is a member of AMBruno and an artist with an interest in the embodied nature of human knowledge. Her media include artist’s books, video installation, and various forms of chemical photography.

The first in the Artists’ Books Now series is to be hosted  by  the British Library on Monday 23rd April, celebrating Artists’ Books by thinking aloud with the books, their makers and their readers.

Posted by Eleanor Dickens at 10:04 AM