The Lives of Typewriters and Large Data-sets: The Will Self Archive

by Chris Beckett, Manuscripts Cataloguer at the British Library currently working on the Will Self archive. The archive, which was acquired by the Library in 2016, consists of 24 large boxes of papers along with artwork, audio-visual material and the author’s computer hard drive. The first tranche is now discoverable through our Archives and Manuscripts catalogue at Add MS 89203

On 24 June 2007, Will Self typed a letter to J G Ballard. It included, in passing, remarks on a German film he had just seen, set in East Berlin in 1984, some five years before the Fall of the Wall: Florian Henckel von Donnersmarck’s The Lives of Others (2006). ‘The film would be worth seeing for the furniture alone,’ Self suggested, ‘but best of all is that the entire plot hinges on a typewriter, specifically a Groma Kolibri. A portable of beautiful compact sleekness, which our hero is able to hide from the Stasi.’

The ‘hero’ in question is a writer under state suspicion. He keeps his sleek portable hidden under the floorboards. Powerful tools of communication, all typewriters in East Germany were registered and numbered. The writer is unaware that his apartment is bugged. As the Stasi agent listens, and begins to log what he hears, he learns more about the writer’s life in the round. Invisible and increasingly engaged with the life of another, agent HGW XX/7 – for he too has a number – begins a dangerous moral journey from surveillance to active protection. 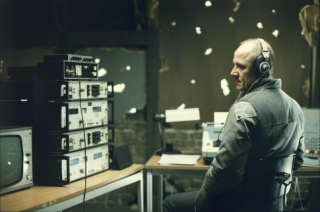 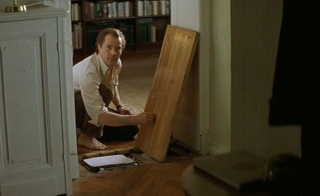 I first came upon Self’s letter in the course of cataloguing Ballard’s papers some eight years ago (Add MS 88938). It particularly caught my attention because by coincidence I had only just seen the film myself. Of course, the film is about rather more than East German interiors and a manual typewriter, but Self had reason for his emphasis. Towards the end of 2002, he abandoned using word-processing software for the early stages of writing fiction, turning instead to the typewriter. His papers at the British Library supply the date (September 2002), the location (Liverpool), the occasion (a resident community arts project called ‘Further Up in the Air’), and the typescript that was produced (the story ‘161’), subsequently included in Dr Mukti and Other Tales of Woe (2004).

‘For some time an urge had been growing in me to write on a manual typewriter,’ Self has recalled more recently (LRB, 5 Mar 2015). ‘I didn’t know why exactly but it felt a strangely inappropriate lust, possibly a form of gerontophilia. I disinterred my mother’s old Olivetti, dusted it off, and resolved to type my daily word count, Blu-Tack the sheets to the scarified wallpaper of my Liverpool gaff, and invite the other residents up to view them.’ Leaving to one side the teasing Freudian slide across lust, mother and disinterment, it can be reported that bits of that ‘scarified wallpaper’, and flakes of the plaster beneath it, still cling to the pages of the draft in Self’s archive at the British Library. Unfortunately, instead of the more-forgiving Blu-Tack that Self mis-remembers, he used double-sided adhesive pads (‘holds securely and permanently,’ runs the strapline). They now form an obdurate bonded pile that hides all its words. The stuck pages are a material reminder that a paper archive is fundamentally a set of physical records: conservation expertise will be required to un-do part of that physical record – the fused pages with tiny bits of Liverpool embedded – to reveal another and more important part, the text itself (a text that is also physically rendered, by the hammered registration of the typewriter). 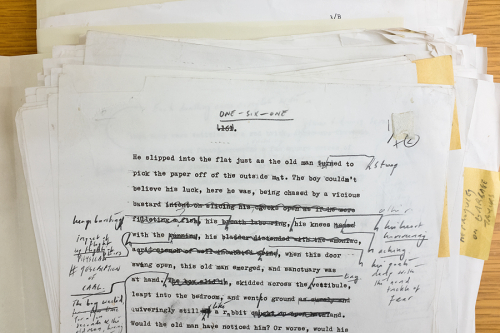 I didn’t appreciate the full context of Self’s letter to Ballard until more recently when – this time, in cataloguing Self’s papers – my frame of reference switched. There, the letter appears again as a carbon copy, together with 41 postcards from Ballard. Among the postcards is one that is undated but is clearly contemporaneous with Self’s letter. Untypically for Ballard, the postcard is typed. It begins by announcing itself as: ‘Olympia Monica – it doesn’t have the deep Monotype bite of your Olivetti, but it’s still deeply satisfying. I feel I could be setting Genesis for the first time. You’ve really started something in the Guardian.’ Ballard is referring here to Self’s ‘Writer’s Room’ remarks (6 Apr 2007) in which he said that he ‘loathe[s] computers more and more’ but owns two ‘beautiful’ Olivetti Lettera 32.

The writing space captured in Eamonn McCabe’s photograph for the Guardian is evocative of the archive. The yellow post-it notes in orderly rows on the walls are an integral part of Self’s method of work, his composition pathway: ‘My books begin life in notebooks, then they move on to Post-it notes, the Post-its go up on the walls of the room […...]. When I'm working on a book, the Post-its come down off the wall and go into scrapbooks.’ Those scrapbooks and notebooks, and multiple drafts of all Self’s fiction – up to and including the novel Shark (2014), word-processed and typed – are the fascinating spine of the papers. 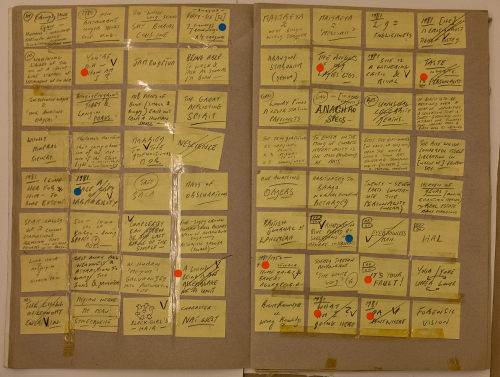 Far from being only a paper resource, however, the complete archive is in fact a typical contemporary hybrid collection, with ‘data’ – to use an apposite, if rather flat and unpromising term – stored in every conceivable form of media, from micro cassettes to obsolete floppy disks. Fading faxes, once a seemingly magical means of attaining immediacy, now evoke only a sense of faded urgency: copy deadlines and last-minute corrections, promotional itineraries, and pages of draft artwork from Ralph Steadman that once sped along the enchanted fibre-optic cabling before billowing out, grainy and faint. There are audio recordings on cassette (interviews for journalism assignments, with subjects as varied as Ballard, Morrissey, Damien Hirst and Cate Blanchett), radio and television broadcasts, and there is also a computer hard-drive awaiting a spot of digital forensic attention. Flatly pictured, the hard-drive makes an elegant image in yellow, green, orange and black. Inside the coloured box, drafts and distractions are captured indiscriminately. For the time being, only the paper archive is available to readers whilst work continues to transfer the remaining material to – in the irreducibly metaphorical language of the digital world – accessible platforms. 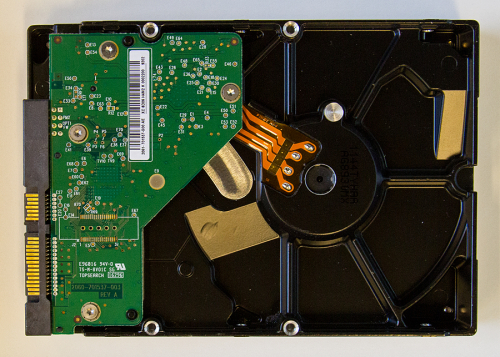 Self associates his disenchantment with writing on the computer with the coming of broadband. For some years now, he has been appraising the impact of the internet on the ways in which we write, read and think. In this, he has not been, of course, a lone enquiring voice – for an engaging overview of the issues, see, for example, Nicholas Carr, The Shallows (2010) – but Self has addressed the subject specifically as a writer of fiction: ‘when broadband came along in 2004 I understood intuitively it was inimical to the novel, an art form that depends upon the codex for its inception as well as its reception’ (Guardian, 18 June, 2016). On-line distraction is viewed as literary imagination’s worst adversary, the enemy of uninterrupted composition and the enemy of sustained reading. For Self, the novel is an experience best bounded by its paper covers.

In Phone, the final novel in Self’s recently completed trilogy, the information age is fully-fledged, and the smartphone is a ‘five-hundred quid worry bead’ in the hand. The looping and interwoven narratives of Umbrella (2012), Shark (2014) and Phone (2017) span the 20th century. Written in an ever-continuous present tense – it is always now – the novels explore the impact of technology on psychopathology, especially the technology of war and communications. They also tell a veiled and invented family history insofar as the three generations of the De’Ath family the trilogy portrays are based loosely upon three generations of Selfs, beginning with Sir (Albert) Henry Self (1890-1975), who is ‘Sirbert’. A substantial body of family letters and papers in the archive provides an illuminating documentary foreground to the transformation. Punning on the fictional family name, Phone ends with the word ‘death’, and concludes with a particular death – off-page – the death of weapons expert David Kelly.

In Phone, a generation raised on Space Invaders goes to a war mediated by the screen: ‘Sitting in the transport’s booming fuselage, listening to the squaddies clustered round a laptop, who’d be watching one of the video montages it’s become de rigueur for your comrades to compile when you finish your tour: footage of the grunt footing it down dusty alleys, bracing a few rag heads, rattling around in an aypeesee and playing videogames – all to the accompaniment of the tinny-synthy chorusing you’re outta touch – you’re outta time …’ (p. 564).

MI6 agent Jonathan De’Ath, aka The Butcher, has broken the golden rule of tradecraft. He has sentimentally kept an ill-judged ‘data-set’ (yet another hybrid archive) of his clandestine affair with Lieutenant-Colonel Gawain Thomas, field commander of a regiment deployed in Iraq: ‘cassette tapes, compact and digitally versatile disks, external computer hard disks, photographs and photocopies which constitute his large data-set: an electroencephalogram of his and Gawain’s entire relationship, registering the rise and fall of their passion for one another’ (p. 556). With a memory as extraordinary as the retentive capacity of his grandfather (sage Sirbert), Jonathan remembers everything, yet still falls anxiously prey to the reassuring quiddity of evidential records. Gawain has been a lover under surveillance.

Returning to the German film, perhaps the ‘star’ of The Lives of Others is not the typewriter after all but the novel as book, an increasingly marginalised artefact in a digitally-driven culture, as Self has lately lamented. After German Reunification, the writer visits the Stasi archive (opened to public access as soon as 1992) to read his files. A trolley piled high with folders is wheeled out. Confused at first by the official record (part truth, and evidently part fiction), he soon realises that HGW XX/7 had protected him from arrest, even removing the concealed typewriter from his apartment just before it had been searched. The agent is now a postman. The writer tracks him down, intending to speak to him, but finds himself unable to do so. A couple of years later, HGW XX/7 – still walking his post around a much-graffitied Berlin – passes a bookshop. Prominently displayed in the window is a new novel by the writer, Die Sonate vom Guten Menschen [Sonata for a Good Man]. Intrigued, he enters the shop and examines the book. He discovers that it is dedicated ‘To HGW XX/7, in gratitude’. The shop assistant asks if he would like it gift-wrapped. ‘No,’ he replies, ‘it’s for me’. Here’s the film clip.

As for Will Self, he soon succumbed. Typewriterly lust got the better of him and he bought not one but two sleek Groma Kolibris. His ‘large data set’ at the British Library includes all the paper drafts they have so far produced. In 2015, however, he intimated that his German love affair may have run its course. You can’t get the parts, and engineers are hard to find. Now there is (or was) a new passion. It’s an old flame re-ignited: ‘for years I’ve had a twinkle in my eye when I gaze upon the slim, silvery forms of the Mitsubishi propelling pencils I customarily use to take notes’.

The first tranche of the Will Self archive is now available at the British Library: Add MS 89203. I spy graphic adventures, in a difficult hand, on the horizon.

Posted by Eleanor Dickens at 10:27 AM